IPE Real Assets’ latest survey of institutional investors suggests that infrastructure has become an even more attractive asset class due to its stability during the COVID-19 crisis, its potential to protect against inflation and the role it can play in ESG and energy-transition strategies.

According to the study, most investors either thought infrastructure had become more attractive over the past two years (46%) or its appeal had remained the same (42%). The findings, published here, were debated at the IPE Real Assets & Infrastructure Global Investor Conference in Munich last week.

During a conference panel session, after the results were revealed, Christian Fingerle, senior managing director at private markets investment adviser StepStone Group, said interest in the asset class from investors was “unabated”.

He said: “From the existing clients, we still see huge demand, it’s growing ever. We also see many new clients being interested in infrastructure and trying to see how they can access the asset class.” 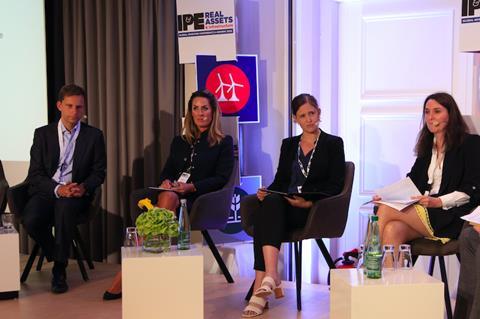 Jan-Willem Ruisbroek, head of infrastructure investment strategy at APG, was interviewed on stage about how the Dutch institution’s infrastructure strategy had evolved from its inception 18 years ago.

“I’ve seen the outcome of the survey,” he told conference delegates, “and the arguments for investing in infrastructure were exactly the same as they were back in 2004 and 2005: inflation linkage, long-term stable cashflows and diversification to the portfolio”.

Ruisbroek, interviewed by editorial director Liam Kennedy, added: “Interestingly enough, ESG was not a factor at that point in time… so, it is quite interesting to think about ESG and how it has evolved.”

“We have been investing in infrastructure on behalf of both our balance sheet and our clients since about 2014, and at that point it was regarded as a diversification to our fixed income offering,” she said. “Now, our internal client and our external clients see it very much as a route to true impact investing, a route to truly investing in the real economy and bringing about real results and social purpose.

“I agree, [the attraction] has not abated at all, and in some cases I think actually increased.”

Josie McVitty, senior adviser for infrastructure at New Zealand Superannuation Fund, explained how the sovereign wealth fund has been seeking to increase its exposure to the asset class and that ESG has been a very important driver.

McVitty, who is interviewed as one of a number of investor case studies in the latest IPE Real Assets magazine, said: “We see infrastructure as one of the ways that we can actively invest to advance the net zero agenda, and we want to be visible and in that space,” she said.

But investors questioned the extent to which infrastructure can provide a hedge against inflation. The “theory for infrastructure” has always been the provision of explicit and implicit inflation-linked revenue streams, Fingerle said, but he admitted that it might prove difficult to pass today’s high inflation through to consumers amid a growing cost-of-living crisis and “against the backdrop of social inequality”.

Investors potentially face “a very hard discussion with other partners, with management and with the politicians and regulators on how that can actually be enacted in a way that works for everybody”, he said. “So I think there is a risk that this may not work as perfectly in this high-inflation scenario.

McVitty said that, while there was a “heightened focus on the short-term implications of inflation”, along with greater potential political and regulatory risk, “I’m not sure it’s fundamentally changing how we think about infrastructure”.

Ruisbroek also questioned assumptions that infrastructure provides inflation protection. “Yes, infrastructure revenues, top-line cashflows are often inflation linked,” he said, “but I have not come across an academic paper that actually proves that the valuation of infrastructure is linked to inflation”.

But what has “actually proven to be right is diversification and good returns”, he said. “The correlation to other asset classes has been low and the return contribution has been high. And that, of course, in itself is already a good reason to invest in infrastructure.”