Christopher Walker asks, with the rush into net zero, are real estate investors in danger of being caught out by physical climate risk?

In the book Principles of Sustainable Finance, professor Dirk Schoenmaker and Willem Schramade of Rotterdam School of Management outline the extent of physical climate risk and seek to “change the dominant culture embedded in financial risk-return thinking”. 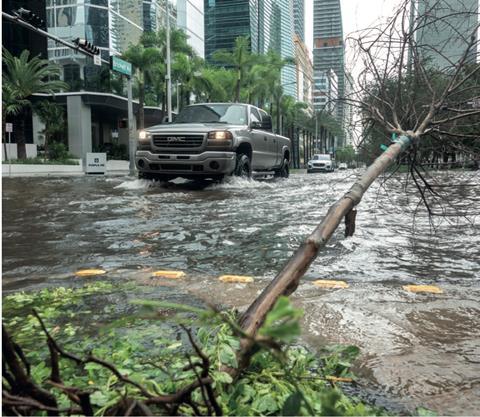 They point out that, if sea levels were to rise by one metre later this century, then once-in-100-years flooding events would happen every six months in New York, every month in Kolkata and every tide in Wellington, New Zealand. “Translating flooding risk to financial losses, Hallegate and colleagues (2013)…(estimate) global losses could approach $1trn [€885bn] or more per year,” the pair observe.

The implications of such research are, indeed, worrying for investors in real estate. Or at least, they should be. And yet, in a recently published paper Climate Risk and Commercial Property Values, the authors from Henley Business School found: “Valuers are increasingly aware of heightened climate risk but are generally not explicitly incorporating it into market valuations.”

One of the authors, Steven Devaney, associate professor in real estate appraisal, says: “We got a sense that investors were looking at physical climate risk, but did not feel ready yet to share their work.”

This theory is borne out by the experience of Andy Szyman, head of sustainability at BMO Real Estate Partners, who says: “We have done some modelling, but at this stage we don’t want to spook people with something we don’t believe we have a good grasp of.”

Devaney found “significant knowledge gaps remain” and “many difficulties in estimating future asset values”. He suggests that, although “Europe may be ahead in planning and environmental management, it is behind when it comes to research” in climate risk compared with the US.

“There is a parallel to how we talked about carbon 10 to 15 years ago,” he says. “People are talking, but there’s not much evidence of policies being implemented. We need more of a sense of purpose.”

This is not surprising. As Will Robson, global head of real estate applied research at MSCI, says: “Physical risks are very difficult to model. Research so far has concentrated on how much carbon do you have to take out? What we haven’t yet done is properly stitched together transition and physical risk and looked at the different scenarios in greater detail. We need to disaggregate the physical risks and net-zero models.”

According to Devaney, “modelling is the key issue”, and he suggests “a working group of asset owners and managers to conceptualise and test ‘climate-adjusted’ financial modelling”. In particular, “modelling is too much driven by historic experience” and an assumption “only places that used to be affected will still be affected, and affected in the same way”, he says.

Robson agrees: “There is a common misconception amongst clients that the way physical risk looks today is the way that risk will look in the future – that today’s weather patterns will remain the same but worsen when, in fact, there could be very different changes. For example, certain areas prone to flooding may actually get drier in the future.”

This is certainly a problem when such models are used to establish value at risk. Christi Vosloo, head of ESG at Swiss Life’s subsidiary Mayfair Capital, says: “The climate science in these models is well established but… the impact on value is challenging to model.”

Kristina Arsenievich, director of European real estate ESG at Barings, says: “We recently updated our model, but it does have to be based on what’s available from vendors. The problem is there when you look at location – such a vital criterion… in most models the resolution is merely the nearest kilometre. In other words, the data can be misleading.”

Gianluca Minella, head of infrastructure research at DWS goes further. “On the surface, physical climate-related risk assessments based on asset coordinates utilise the same nomenclature and typology. However, the mapping grid, climate data, RCP scenario used and individual factor weighting could all be significantly different between providers, making a direct comparison misleading.”

MSCI sees solutions further out. “The next step will be to build models looking at different scenarios in a coherent way combining the risks, that allow clients to input site-specific data,” says Robson. “But this is an area where many managers are currently struggling.”

It is about more than flooding
Neil Cable, head of European real estate at Fidelity International, warns that “the industry does not fully map the physical risks yet beyond flood-plain planning”.

Simon Durkin, head of European real assets research at BlackRock, agrees. “Too many investors at the moment simply think of physical fiscal risk in a binary manner – as simply looking at whether buildings are in a flood plain or not. We need to recognise that [other] extreme weather conditions can have effects.”

Szyman says: “The limitations of modelling [were] demonstrated by the fact one of our central London properties recently experienced flooding despite desktop analysis suggesting negligible risk.” But Szyman is seeking a broader approach, “looking at a range of climate variables such as increased wind speeds, higher rainfall, and mean temperature rises”. He says: “It’s important also to consider issues’ potential impact through different lenses, such as business continuity, cash flow, reputational risks, as well as simply physical damage to structures.”

Listed real estate specialist Kempen has been working with German reinsurer Munich Re to model the effects of 19 climate events on more than 200,000 buildings. Kempen has completed its US analysis and Europe will follow in 2022.

“If we’re not fast enough, global warming will go faster than us,” says Egbert Nijmeijer, co-head of real assets at Kempen. For example, its research found implications for real estate companies that own Florida hotels. “As the planet heats up, hurricanes will get more energy,” says Nijmeijer. Kempen found that, whereas at present a category-three hurricane is likely to strike Florida every five years, having minimal effect, a 4°C rise in global temperatures would mean a category-five hurricane would probably strike every year, causing significant damage.

Nijmeijer says one of the most interesting things to come out of the US research is “the very visible effect on real estate that will happen in the Sunbelt as it heats up tremendously”. Overall, under a 3-4°C warming scenario, a significant discount opens up between different cities. For example, the value differential between Austin, Texas and Boston, Massachusetts rises to 17%. “Some real estate assets will simply be stranded because you cannot insure them,” he says. “They will effectively be worth zero.” 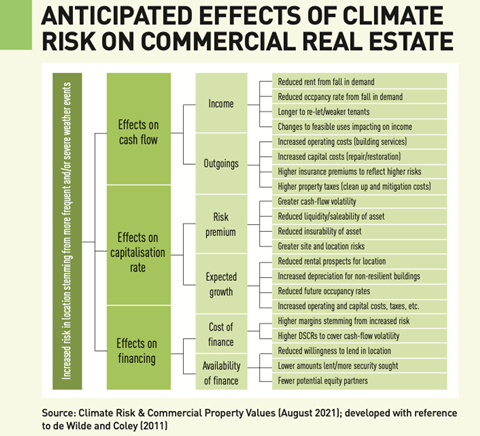 Could it also be harder to secure debt financing as well as insurance for certain assets? The Henley business school paper found evidence in the US of lender concerns about climate risk and this was being manifested in the form of transferring risk to government-sponsored enterprises through the mortgage-backed securities market.

But real estate fund managers do not appear to be seeing difficulties at present. Christina Hill, head of Americas asset management and global head of ESG at PGIME Real Estate, says: “Climate risk is becoming more commonplace with lending. We anticipate more cooperation between lender and borrower.”

She adds: “As insurers slowly get on board with forward-looking climate models to inform them of their pricing, the downside risk of insurers pulling out of high-risk markets, or simply not extending coverage to assets, emerges as another concern for investors and owners.” But at present “insurers are getting better, but they are still generally using historical data to determine insurance costs and deductibles”, Hill says.

But Devaney found “mounting evidence of the losses borne by insurers from a combination of increasing frequency and intensity of extreme weather, and the relatively high value of assets exposed to hazards.” Yet he says there is little evidence this has affected “insurance availability or pricing”.

Devaney suggests this is because insurers’ horizons are inevitably as short as their contracts – if they need to adjust premiums, they can always do that on renewal. “In contrast, it is the buyers of assets who are making a longer-term decision,” he says.

“If pressure is to come for investor action, it will come from the regulators who regulate investment by pension funds and insurance companies to make sure that they are taking on board the long-term risk exposures we’re talking about,” Devaney says. “It seems very surprising to me that people are not doing more now. Even in the most optimistic models, it is clear new areas will be at risk, and pricing should reflect this.”