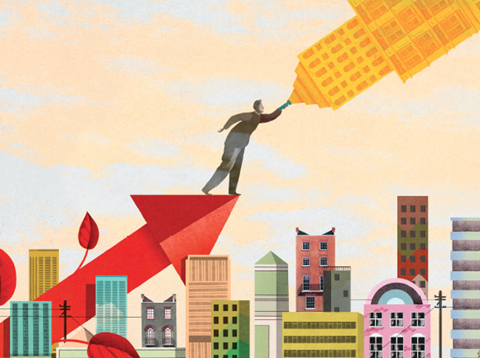 Will 2018 be the year the world turned flat? For real estate investors, it looks a foregone conclusion.

As reported in the latest edition of IPE Real Assets , the decline in cap rates – most apparent in high-quality, core markets – has slowed, putting the brakes on increases in prices and capital returns. But it has not deterred investors from real estate. They are no longer reaping the rewards of yield compression, but they remain loyal fans of its income at a time of stubbornly low bond yields.

The most notable slowdown in pricing momentum has occurred in the US. Just 10% of major US office markets recorded yield compression over the past year, according to PGIM research, as investors displayed greater caution towards markets where key transactions have been taking place at historically low yields.

The latest survey by the Pension Real Estate Association in the US shows a steady decline in return expectations, including a small capital growth component. Investors expect US real estate total returns to fall from 6.9% to 5.6% next year and 5% in 2019. The capital appreciation portion of the these returns are just 2.1%, 1% and 0.3%, respectively.

The picture is not dissimilar in the UK, where the Investment Property Forum carries out its own consensus forecast survey . Total returns next year are expected to hit 4%, with robust income returns of 4.8% offsetting capital value declines of 0.7%. The survey suggests expect a four-year stagnation after a better-than-expected 2017, despite uncertainty surrounding Brexit.

Both the UK and the US have seen a reversal of the decade-long lowering of interest rates. The Federal Reserve raised rates last week from 1.25% to 1.5%, while the Bank of England kept things unchanged after last month’s rise from 0.25% to 0.5% .

At the time, Chris Urwin, head of global research for real estate at Aviva Investors, said the increase in the base rate was unlikely to have a major short-term impact on commercial real estate pricing, but it did mark the end of era of “very strong returns” for the asset class.

Australia, which has seen a recent surge in foreign capital flows and corporate activity , is also expected to slow down. With the exception of 2009, the Australian property market has generated a return of 9% to 10% annually over the 20 years to June 2017, according to Atchison Consultants . But this does not look feasible over the next three to five years. “Based on the forecast property return of 7.4% and income return of 5.9%, a forecast absolute return is 6% to 7.5%,” the consultancy said.

Germany, which aside from the UK is the biggest core market in Europe, has also attracted significant investment inflows. Consultants at Capital Economics believe Germany is set to see some of the lowest average total returns between 2018 and 2021. “With tighter monetary policy on the horizon, property yields are at threat from rising risk-free rates,” the company said.

According to Neil Cable, head of real estate at Fidelity International, many European prime markets are in “bubble territory” and 2018 should be the year to be “counter-intuitive” – and this can mean focusing on shorter leases.

He said: “Being in an extended cycle means we are one year closer to the peak, so the focus for investors should be on preparing for the next phase of the cycle, locking in to sustainable sources of income and de-risking.”

Yields on prime assets – especially those with long leases – are being bid down to historic lows – 3% or even less. “Property priced at such low yields is likely to be vulnerable to interest rate increases,” he said. “So it may seem counter-intuitive to take the risk of shorter leases at an advanced stage of the cycle, but when 200-300bps premia over prime yields are available, it is certainly worth considering.

“The rule for this stage of the cycle may well be to avoid both extremes of the property market – the ‘pumped-up prime’ assets, and the ‘terrible tertiary’ assets. Instead, get rewarded for risk and capture additional yield by focusing on ‘investment grade’ properties outside the super-prime areas.”

With higher interest rates now finally on the horizon, real estate investors will be most dependent on one factor: economic growth. This year, the global economy became more consistently buoyant.

Vince Childers, portfolio manager for the Cohen & Steers Real Assets Fund, expects increased business and consumer confidence, along with the consequent increases in spending and job growth, to drive increased demand for real estate in 2018.

“At the same time, higher input costs – labour, materials, financing – and rising return requirements could reduce the economic incentives for construction, slowing the pace of new supply,” he said. “Dividend yields and cash-flow growth prospects remain attractive, in our view, although we expect different property sectors and geographies to respond very differently to an evolving market landscape.”

He added: “In general, we anticipate that the demand for commercial real estate in the US will outstrip new supply across most sectors, driving rents and REIT cash flows in the coming months. We also see the potential for positive earnings surprises as the year unfolds, given the generally conservative guidance companies have recently provided.”

“More markets are now doing well, notably several in continental Europe. This is a great positive and is creating opportunities for real estate investors.”

The question for 2018 will be whether this synchronised growth can be continued and consolidated. The OECD is predicting global growth of 3.6% in 2017 and 3.7% next year.

But Bellman and Rodriguez also raise concerns about “the weight of capital chasing income-producing assets” driving yields to historic lows in many locations. “There is concern in some places, particularly in the US, that we may be getting a little late in the cycle.”

“For the next few years, we believe that a hands-on, active management approach in real estate is likely to influence performance more than simple market and sector selection. This insight encourages us to look for very specific, very granular investment opportunities that are appropriately priced. This applies worldwide, but there are nuances in each region,” the directors said.

Bellman and Rodriguez highlight new technology as an important trend for the year ahead. “These technologies are having a net positive effect on demand in tech-centric office locations, but a net negative impact on back office demand; experiential retail could become more virtual and change storefront demand,” they said.

For instance, e-commerce/sharing economy is creating leasing demand for logistics and data centre properties, but is having a more differentiated impact on office space and a largely negative impact on the retail sector. Job automation and artificial intelligence technologies are having a net positive effect on demand in tech-centric office locations, but a net negative impact on back office demand; experiential retail could become more virtual and change storefront demand.