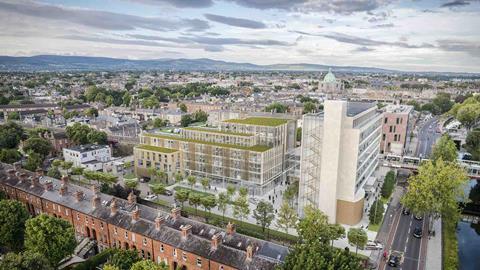 The project at 2 Grand Parade was bought from Hines and Peterson Group through a fund-funding agreement.

The fund previously acquired a planned office property in Dublin in 2015. Offering approximately 16,000 sq m of space, the Shannon Building on Burlington Road was let on a long-term lease to Amazon prior to completion in 2017.

The development comprises two distinct sections, with around one third of the rental space located in a historic existing building dating from 1964 – the former headquarters of Carroll’s Tobacco Group – which is being upgraded. The remaining two thirds will come from an adjacent new building.

Union Investment, which already holds seven real estate assets in Dublin worth around €770m, said it will continue to monitor the city for potential acquisitions in 2020.

“The 2 Grand Parade development is the fourth office property we have acquired in Dublin in the last months. The influx of international companies and the expansion plans of office users already based in Dublin are creating excellent conditions for letting speculative developments and for achieving corresponding value growth.”

Brian Moran, senior managing director of Hines, said: “This is our first transaction with Union Investment in Ireland and we very much welcome this exciting new partnership.

“The project incorporates an imaginative restoration of a landmark building combined with a sensitively designed extension to the rear, all of which will combine to deliver a modern office complex at 2 Grand Parade.

“The demand for new office space remains very buoyant in Dublin city centre with the market characterised by strong and consistent take-up of new developments and high pre-lettings of developments currently under construction.”