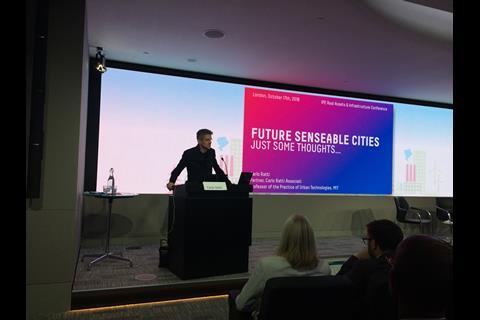 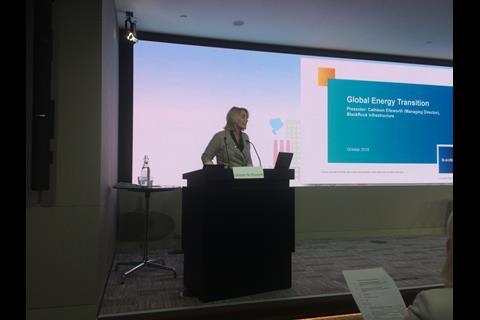 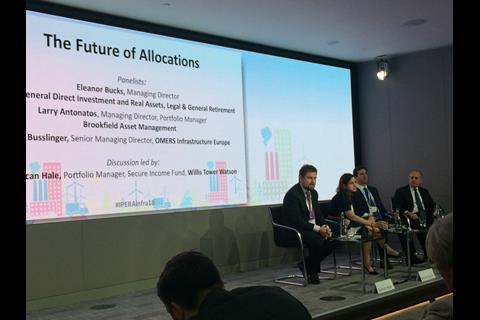 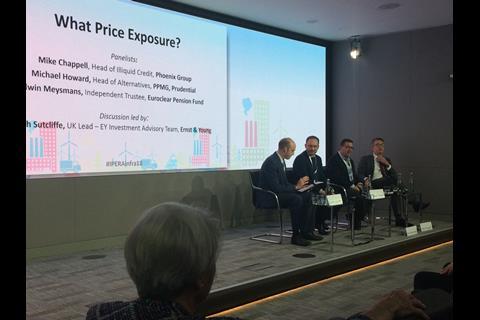 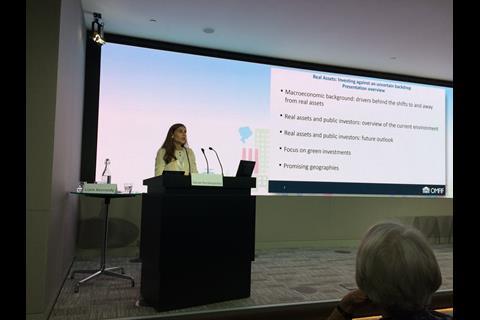 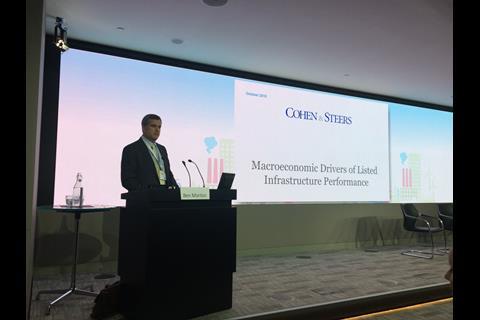 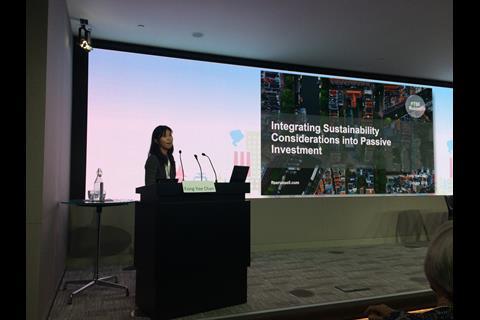 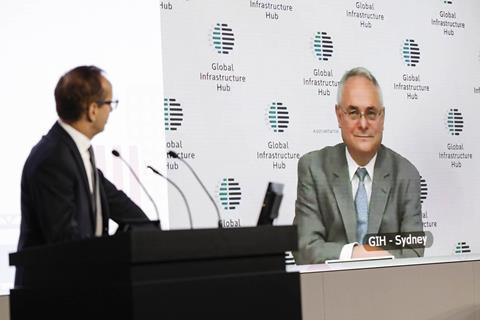 The widespread move into infrastructure markets by institutional investors in recent years will prove to have been a permanent, structural shift, rather than a cyclical reaction to low interest rates. This was one of the key messages reiterated at this year’s IPE Real Assets & Infrastructure Conference this week.

In fact, disruption spurred by technology and climate change is likely to have a bigger impact on the asset class and investor allocations, delegates heard over the two-day event at the London Stock Exchange.

The event coincided with the release of IPE Real Assets’ annual infrastructure survey, which found that rising interest rates would not affect the infrastructure allocations of 70% of investors – although 25% said it would have a negative impact.

While the one-quarter proportion could suggest a slowdown in the future, a panel of investors argued that the move into the infrastructure asset class would not be reversed. Philippe Busslinger, who leads European infrastructure investments at one of the world’s biggest infrastructure investors, Canadian pension fund OMERS, said: “We see it as a structural shift.”

Danae Kyriakopoulou, chief economist and head of research at the Official Monetary and Financial Institutions Forum (OMFIF), also presented research carried out with BNY Mellon that showed that 82% of state pension funds and sovereign wealth funds did not expect to exit real assets as monetary policy normalises.

Busslinger, a senior managing director, said OMERS had increased its allocation to infrastructure “progressively” over the years, “as the performance record has been built up”, and this was not due to interest rates.

Eleanor Bucks, managing director at Legal & General Retirement, said the low-yielding market environment played a part but was not the main reason for the move into infrastructure. A structural shift had taken place, she said, because investors had educated themselves very quickly about the asset class and as a result “the means of doing it is easier”.

Busslinger agreed that the asset class had evolved very quickly over the past five to 10 years. The growing experience of investors in the asset class would increase investor confidence, he added.

Bucks was also surprised at the “pace at which infrastructure had matured”.

Con Keating, chairman of the European Federation of Financial Analysts Bond Commission, gave another reasons for investors to remain in real assets over the long-term: the rise of collective defined contribution (CDC) pension schemes. These types of pension schemes would have very long investment horizons and will become “major players in real asset investment”.

In the meantime, record high asset prices are not deterring investors, delegates heard – although competition in the asset class is making it harder to find value.

One of the headline findings of the IPE Real Assets survey was that 48% of investors thought infrastructure had become too expensive. But while this could be leading to a slowdown in investment activity, it did not appear to be weighing on allocation levels.

Busslinger said infrastructure was “expensive on an absolute basis but not on a relative basis”.

Duncan Hale, portfolio manager for the Secure Income Fund at Willis Towers Watson, said there was still value to be had, but this was increasingly to be found in smaller assets – where there was less competition – and deals that involved more complexity.

The panel was asked by a member of the audience, whether there was still an “illiquidity premium” to be gained from private infrastructure when so many investors were chasing long-term, income-producing assets. Larry Antonatos, managing director and portfolio manager at Brookfield Asset Management, suggested that what was commonly called an illiquidity premium might be better understood as a “complexity premium”.

During another panel session, Gareth Sutcliffe, UK lead for investment advisory at EY, asked whether there was still value to be had when some much capital had been raised to chase a limited pool of assets. Michael Howard, head of alternatives at Prudential Portfolio Management Group, responded: “In a word, yes”.

Howard continued: “If you overly worry that too much money is raised in the near term you might miss the big picture” – of a global funding gap that continues to be large. Some assets were “hot”, but there were other sectors where pricing was more “comfortable”, he said.

Edwin Meysmans, independent trustee of the Euroclear Pension Fund and former managing director of Pensioenfonds KBC, said “we are still a big fan, like many pension funds, of investing in infrastructure”. He added that he was glad to see expected returns coming down “to a more reasonable level”.

Anish Butani, senior associate for private markets at Bfinance, who was speaking about benchmarking, said: “There really is no consensus as far as return targets are concerned”, ranging from absolute targets to inflation-related objectives.

He said in today’s market there was a potential for “style and strategy drift”, with fund managers that were targeting double-digit returns in the past coming back to the market with the same targets, despite the implication that it requires taking on more risk. Butani said “significant asset-level analysis” was required to “understand potential strategy drift and bid discipline”.

And with political risk and environmental, social and governance (ESG) concerns rising up the agenda, infrastructure pricing and return expectations could come under other sources of pressure.

Busslinger said political risk had been on the rise, which he ascribed to a “lag effect” of the global financial crisis of 2008. “It is something institutional investors need to be very aware of,” he said.

Hale said there was a lack of public debate in the UK about renewable energy and affordability of infrastructure.

From the audience, Peter Kranaveld, international pensions adviser, was critical of the asset management industry for not considering sufficiently the end-users of infrastructure, risking popular discontent and consequential political repercussions. Infrastructure investors could face losing two of the “legs” propping up infrastructure’s three-legged stall.

Bucks said that, before every infrastructure investment was approved, Legal & General Retirement considered consumers. Infrastructure “has to work for them or it can unravel”. Renewable energy is very important to Legal & General, which has a long-term plan to build exposure to the sector, she said.

Laurenz Czempiel, CIO of Ventusolar Global Capital, showed how solar power was the fastest growing source of power generation and in 30 to 40 years would become the biggest.

Cathleen Ellsworth, managing director at BlackRock, explained how global energy transition – from coal-fired power to renewables and natural gas – was creating investment opportunities, fuelled by the increased mobility of liquefied natural gas, the need for energy assets to be constantly replaced and upgraded, and outsourcing by major energy companies.

Charles Donovan, director of the Centre for Climate Finance and Investment at Imperial College Business School, outlined the stark reality – and profound uncertainty – about climate change, and the importance for institutional investors to join some of their peers to reduce carbon emissions.

Asked what “could be done about Trump” and the current US policy and rhetoric towards carbon emission targets, Donovan said the US had always lacked “climate leadership” and that he was more concerned about China (with reports that construction of coal power plants has been accelerating in the country).

A panel discussion led by Tim Van den Brande, director at KGAL Capital, polled the audience electronically with the question: Assuming you implement an ESG policy, could you foresee the possibility of ever investing in coal-fuelled electricity plants? More than 60% of the audience answered no.

Sylvain Froissard, senior investment manager at insurer BNP Paribas Cardif, said: “For me it is a no-go”. But Paul Droop group pension CIO at the Bank of Ireland, said there were risks in ruling out any investment, and emphasised the importance of differentiating ESG policy from ESG risk management.

Droop said that not investing in coal power might address the ‘E’ in ESG, but what about the ‘S’, he asked. Noting that it was international poverty day, he wondered whether “withholding my capital” for environmental reasons could, hypothetically, have an negative impact on poorer populations that needed cheap energy.

Setting ESG policies can produce “unintended consequences”, Droop said, and that if an ESG policy “takes things off the table, you are potentially muddying risk management”.

Nonetheless, investors are increasingly funding renewable energy. This in itself – and other technological advances such as electric cars – is beginning to disrupt traditional electricity utilities. As Ajay Dayal, investment director at Legg Mason Global Asset Management, pointed out, electricity company Scottish Power is now effectively generating 100% of its energy from wind.

However, Dayal was keen to emphasise how, rather than necessarily being disrupted by technology, infrastructure could be a key facilitator of disruption – and therefore there could be opportunities for investors.

For example, rather than be disrupted by the emergence of electric cars, National Grid in the UK is looking to capitalise on the need for fast charging throughout the country. The company, Dayal said, wants to create a high-voltage grid, potentially connecting petrol and motorway service stations around the country. “People talk about grid disruption, but National Grid will be the facilitator,” he said.

The point can be applied also to autonomous vehicles (AVs), whose emergence has often been seen as a threat to the toll-road sector. But the technology for connected and autonomous vehicles (CAVs), which are able to communicate with each other, could create opportunities possibly through the introduction of dedicated CAV lanes on motorways.

He said investing in these opportunities via listed markets can enable investors to respond to technological trends – especially those that begin to confound earlier predictions.

Carlo Ratti, director of MIT Senseable City Lab, sits on a committee that is seeking to develop autonomous cars for Singapore, and his team has carried data research that shows how cities like New York and London could be run on a fraction of the cars they host today.

And he showed how cars themselves can be used to collect data on vibrations on bridges, with the potential to help monitor for structural defects – something that could be very interesting to cities and governments in the wake of the recent bridge collapse in Genoa, Italy.

Rather than causing the death of cities, as predicted in the 1990s, the internet and technology has transformed the way cities are being used. Technology will change all the time, but city infrastructure will be used for 50, 100 or hundreds of years. So the key is future-proofing infrastructure and real estate, Ratti said.