Its inception pre-dates the financial crisis, but infrastruture investment has evolved significantly since 2008, writes Georg Inderst

A new, dedicated infrastructure asset class was invented in the 1990s in Australia, spreading to Canada and Europe in the early 2000s, followed by the US and other regions. In a low interest-rate environment, its stylised investment characteristics, such as long-term, stable cash flows, downside resilience, low correlation to business cycles, partial inflation-hedge, look very attractive to investment boards. Now, players of all sorts have joined the race for real assets, pushing valuations up.

It needs to be said that investing in infrastructure is not new. International railways, ports and city development were core ingredients of investor portfolios in the 19th century, as are stocks and bonds of utilities and transport companies since the privatisations of the 1980s.

To put things further into perspective, the actual activity in ‘new wave’ unlisted/private infrastructure is lagging the hype by some measure. The volume of such assets has grown to about $500bn (€432bn) globally but is still only about 0.5% of institutional portfolios. The OECD finds an average allocation of roughly 1% among large pension funds worldwide. And there is an enormous dispersion: while some investors have shifted asset allocations targets to over 10%, a majority of smaller ones are yet to invest.

What are the lessons learned over the past decade? Major hurdles have needed to be cleared on this new journey. The first is finding appropriate investment vehicles. Initially, the industry was largely wrong-footed, with limited choice of private equity-type funds (often with high leverage, high costs and poor governance). There is also a maturity mismatch of short-lived funds (10-12 years) in two directions – that is, with the long lifespan of underlying infrastructure assets, and with the long-term liability profile of pension funds and insurance companies. Today investors find an ever-growing number of (open and closed-ended) funds for different regions, sectors and development stages, and more specialists for infrastructure debt.

A remarkable development has been the evolution of investment approaches. Larger asset owners increasingly follow the ‘Canadian’ model of directly investing in private assets, aiming for better control and lower costs. This means being able to build (and maintain) in-house teams for both transactions and ongoing management. For smaller plans, co-investment platforms of different forms have been established in various countries to overcome lack of scale and too-concentrated exposures. 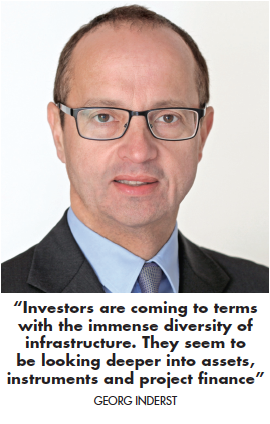 None of this is easy, but more investors are coming to terms with the immense diversity of infrastructure. They seem to be looking deeper into assets, instruments and project finance, instead of relying on some mystical actuarial risk/return characteristics. What can specific assets do for your specific portfolio? In the current bull market, investors are naturally broadly satisfied. Keep in mind the financial crisis produced some surprises. The next recession will provide a much broader test.

Politics is a second major challenge. Institutional investors’ ‘sleeping assets’ have soon caught the eyes of politicians. Post-financial crisis, project financing got a double hit from cuts in public budgets and de-risking of commercial banks’ balance sheets. Now governments worldwide are coming out with grandiose new infrastructure plans, institutions and initiatives, not the least to unlock institutional assets.

These efforts have, so far, not been particularly effective. There is another mismatch: most asset owners prefer lower risk, operating companies while most money is needed in greenfield, higher risk projects. Is the difference between ‘financing’ and ‘funding’ understood? Institutional investors can provide upfront capital to finance projects, as long as this is line with their own objectives and regulatory restrictions. Ultimately, however, the funding revenue can only come from two sources: users/consumers or taxpayers. The industry calls for consistent project pipelines with credible funding models.

People increasingly realise that infrastructure investments are inherently political, whether they are regulated utilities, public-private partnerships, or something else. Investors are in two minds about this. On one hand, the state can provide comfortable ‘guarantees’, such as regulated prices or long-term availability payments – for example, for a school or a toll road. On the other hand, sudden changes in laws and contracts can easily upset all spreadsheet calculations. More countries now protect ‘strategic sectors’ from foreigners – not to speak of the threat of re-nationalisation.

A third challenge is gaining more recognition: disruption in technology, consumer preferences, and market prices. Change does not stop short of infrastructure assets – for example, in the way people/goods travel, the generation and

distribution of energy, use of artificial intelligence. Investors’ long-term investment strategies might need to become more flexible than originally envisaged. How to adapt with assets of low liquidity? When to divest?

Finally, investors will in future – for one reason or another – aim for ‘sustainable’ infrastructure. This looks not too difficult, given its natural connotations with social objectives (for example, hospitals) and green objectives (public transport, clean energy, water and sewage systems, flood defences). However, infrastructure projects are also notoriously prone to wasteful decisions and poor governance, if not corruption. Controversies over how to define and weigh ‘ESG performance’ will test investors’ resolve and transparency issues – even more so for infrastructure investments with their high social and climate-change impact.