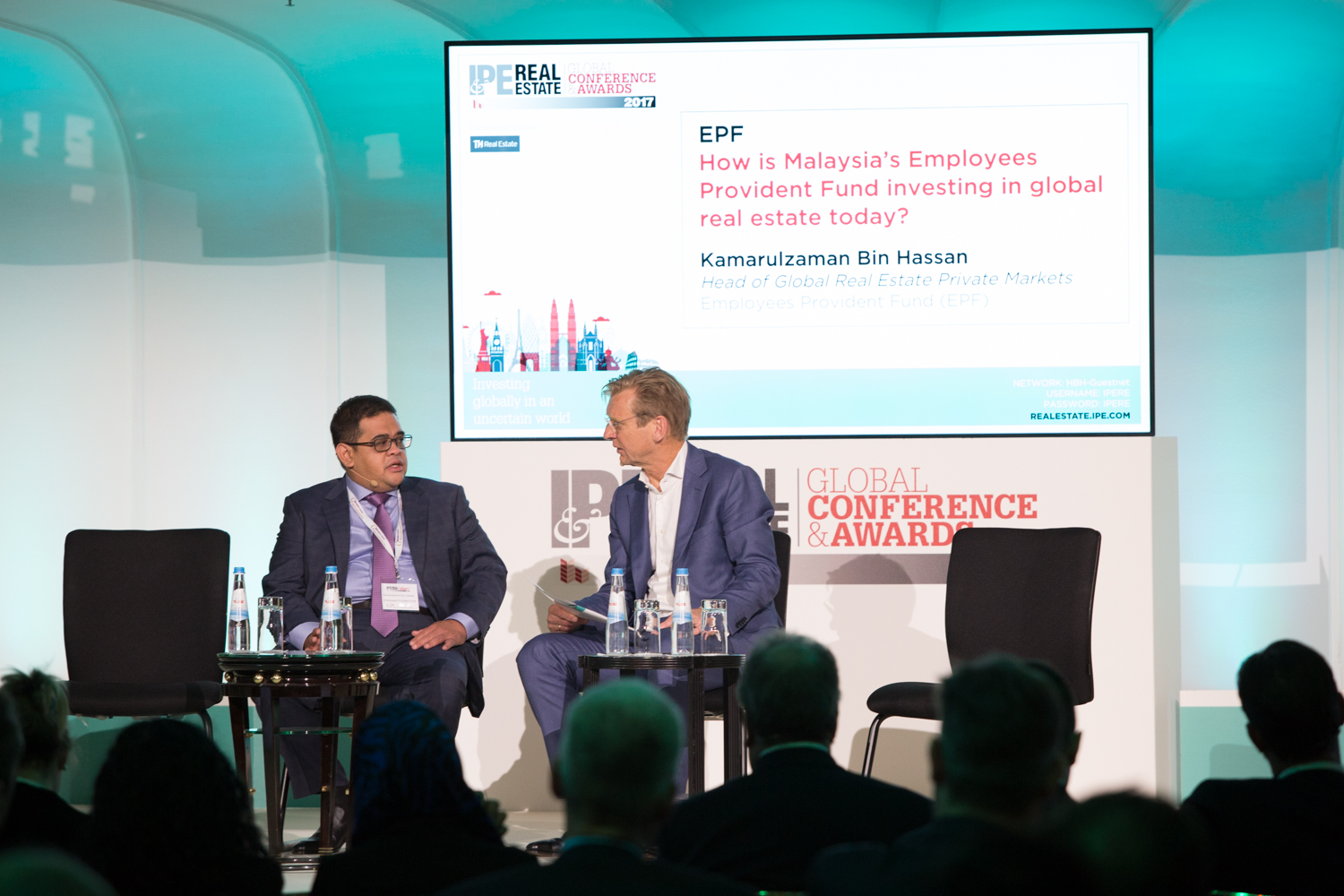 Malaysia’s Employees Provident Fund (EPF) is divesting out of “toppy” office markets in the UK and Australia to redeploy its capital in new markets in Asia and Europe, delegates heard at the IPE Real Estate Global Conference & Awards in Munich this week.

In an interview with conference chair Piet Eichholtz, EPF’s global head of real estate Kamarulzaman Hassan said EPF was looking to invest in South Korea, Spain and the Nordic countries.

Hassan said: “Despite what is happening on the Korean peninsula, we believe there is opportunity for us in that market.”

He said EPF is prepared to allocate US$300m (€271m) to each of the three managers to invest in Korean assets.

He added that when EPF enters a new market it always plans to invest up to US$1bn.

Hassan explained that investing in logistics is a play on e-commerce, which is “very big at the moment”.

Over the past 18 months, EPF has lifted its allocation in logistics from zero to 32% of its global real estate portfolio, said Hassan, noting that it is the one sector that is “under-invested” and only getting traction in recent times.

EPF has already significant exposure to the logistics sectors in Europe and has investment in China and Japan.

“We are very active in Germany,” Hassan said. “We entered the German market in 2013. Later, we went to France and Poland where we do both logistics and offices.

“Recently, we have started investing in the Netherlands and now own assets in key cities such as Rotterdam.”

EPF first went offshore in 2011 when it realised that it had become “too big” for its domestic market.

Today, it has a portfolio valued at US$9bn invested in globally.

Hassan explained that EPF started with the UK because of familiarity with that market. It has since established an office in London to coordinate and monitor opportunities in the UK and Europe.

“We are divesting a few investments out of the UK, particularly in office. But this has nothing to do with Brexit or the UK election,” he said.

“It is because we entered the market in 2011 so we believe it is the right moment to get back our return and deploy the capital to markets where there is value.”

It sold St James’s Square for £175m (€208m) to Hong Kong’s Chinese Estates Holdings this month. It has another asset, Tower Bridge House, on the market and is seeking more than £200m.

Similarly, it is taking profits in the competitive Melbourne and Sydney office markets in Australia.

Hassan said EPF also likes residential sector and has mixed-used projects in London and recently formed a joint venture for a project in Melbourne.

“We are long-term investor and we can wait 7 to 15 years for the returns,” he said. “In Malaysia we are one of the biggest players in residential real estate.”

He foreshadowed lifting EPF’s allocation to real estate in the next couple of years from 9% of total assets.

Currently, EPF, one of the world’s top 10 largest pension funds, manages around US$180bn. At an annual growth rate of 8-9%, Hassan said total assets are forecast to reach US$250bn by 2025.