Denmark’s DKK266bn (€35.6bn) Sampension has sold its stake in an office complex in the Danish city of Aarhus to two fellow pension providers.

The value of the two properties was not disclosed, but according to JØP – the Danish industry pension fund for lawyers and economists – the deal was one of the country’s largest commercial real estate deals conducted between pension funds.

The properties were sold to JØP and DIP, the pension fund for Danish engineers, which have a long-running collaboration on investments.

Mikkel Svenstrup, investment director at JØP and DIP, said: “For us, it is about ensuring that members have good stable returns on their pensions for many years to come.

“At a time when global equity markets are challenged, the property market is showing itself differently. Our property portfolio has yielded double-digit returns over the past year.”

Svenstrup added that the two pension funds – which collectively manage DKK120bn – planned to increase their aggregate property allocation by as much as 50% over the next few years, from its currently level of approximately DKK6bn. 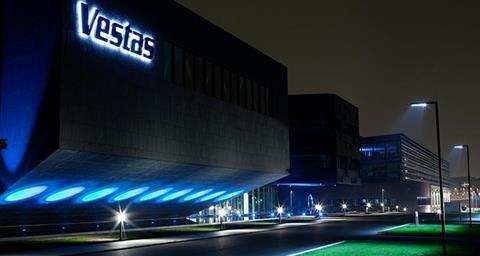 Sampension cashes in on property strategy

Sampension – one of the biggest pension funds in Denmark – purchased the properties from Vestas, the main tenant, in February 2017 in partnership with Solstra Capital Partners.  Solstra has also sold its stake to JØP/DIP.

The DKK266bn fund said its partnership with Solstra had “implemented a number of value-add activities and improvements, attracted new tenants and re-branded the entire complex”.

Henrik Olejasz Larsen, investment director at Sampension, said: “Sales are now happening because we are in line with our business plan. As the market has also developed very favourably, we chose to sell the properties via a structured tender process to a number of selected Danish and foreign investors.

“We can now look forward to a three-digit million profit in favour of customers in Sampension.”

Following the sale, Sampension said it had invested DKK18bn in “properties and property funds both in Denmark and abroad”.

Peter Winther, CEO at Colliers International, which advised on the transaction, said weaker economic growth meant there was “no reason for excessive optimism” about returns from property in 2019.

“That said, we believe in a still quite healthy property market,” Winther said. “The demand for office, logistics and industrial premises is strong, and many investors want an increased allocation in these segments, where not much has been built in recent years.”