After years in the wilderness, the hotel sector resurfaced with a bang in 2013. Yield compression in the mainstream office and retail sectors prompted investors to look elsewhere for higher yields. Volumes in hotel market have not been as buoyant this year but institutional appetite is just as strong.

“Last year, we saw a dramatic increase, with transaction volumes up 17% to $13.2bn (€10.2bn) in EMEA,” says Christoph Härle, CEO EMEA at JLL Hotels & Hospitality. “To date, the rise is only 3% but, if you look at the trailing 12 months, the figure is 9%. The numbers were skewed in 2013 by two major portfolio deals – Abu Dhabi Investment Authority’s (ADIA) purchase of 42 Marriott hotels in the UK for £640m (€813m), and Constellation Hotels’ acquisition of the Groupe du Louvre Portfolio (four hotels) from Starwood Capital for €700m. Combined, they were over $2bn and accounted for around 17-18% of the total transactions.”

These large transactions have not been repeated. In fact, the latest statistics show there were only five portfolio deals totalling £400m in the UK, the predominant market, accounting for 36% of all transactions last year. However, Härle believes that the market could still hit JLL’s earlier prediction of a 20% hike in volumes to $16bn, because there are a number of deals in advanced stages of negotiation that are set to close this year. Banks are continuing sell down over-leveraged assets, while private equity firms are disposing of their properties as funds reach the end of their life-cycle.

Traditionally, private equity firms have been the major players but over the past two years, institutional investors, which accounted for 10% of all activity last year, are flexing their muscles. “There are a number of reasons for the demand,” says Marc Socker, senior director, hotel fund management at Invesco Real Estate. “Real estate in general has become popular because it offers a nice risk-return profile compared to bonds and equities. However, core sectors have become more competitive, which is why alternatives are now the flavour of the month.”

Socker notes that “hotels are particularly attractive because they are operating in a high growth industry and the outlook is strong”. He adds: “Airline passenger numbers are increasing due to the improved economy, but also [because of] the growing middle classes in not only China and India but also countries in Latin and South America who are travelling.” In fact, the latest data from the International Air Transport Association show that airlines expect to see a 31% jump in passenger numbers to 3.91bn by 2017 from the 2.98bn carried in 2012.

Sylvain Fortier, executive vice-president, residential, hotels and real estate investment funds at Ivanhoé Cambridge, the €26bn arm of Canadian pension fund Caisse de dépôt et placement du Québec, also sees the benefits. “Although we are selling most hotels for strategic reasons, they are a good diversifier from office, residential and retail which have become more expensive in many gateway cities,” he says. “The debt market has come back and there is more ability to put in additional leverage at cheaper rates. Also, while the risk is greater, so are the returns.”

The latest figures from The IPD Pan-Europe Annual Hotels Consultative index in June show that the European hotels sector continues to steam ahead, turning in a total return of 6.6% in 2013, higher than the wider market showing of 5.9% and its own performance of 5.8% in 2012. The sample included 742 assets with a value of €12.6bn, up from 505 assets and €11.4bn two years ago. In addition, during the 13-year history of the pan-European data series, hotels were not only the least unstable of all sectors but also one of the most robust, outshining retail, office, and industrial and residential over three, five, 10 and 13 annualised periods. 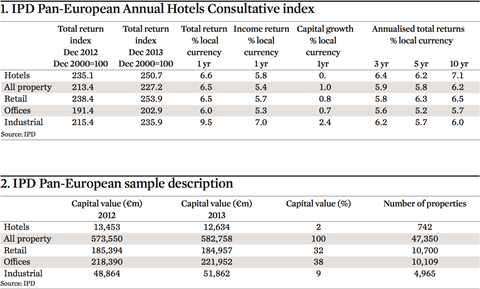 “Investors continue to pay the most attention in the core markets of London, Paris, Geneva, Zurich, Munich, Berlin and Amsterdam,” says Härle. “However, we are seeing more interest in Spain because hotel operators are continuing to reduce the assets they own and now is a good time to get in. The picture is much more mixed in Italy, with the best opportunities in Rome and Milan. The central eastern European cities also offer better performing assets due to the improved operational environment. The exception is Russia and Ukraine.”

Jochen Schäfer-Suren, partner and head of Internos’ Hotel and Leisure division, also sees “Barcelona, Milan and Rome as recovery plays where value can be found at a good price”. He adds: “Munich, for example, is at the top of the cycle because it is farther ahead in the economic recovery than Madrid and Seville. We have different strategies that cover the entire risk spectrum, ranging from three and four-star hotels with long leases in core locations to properties that need to be asset managed and refinanced. The only category we avoid is luxury hotels because they are more volatile and the returns are difficult to predict.”

Mike Watters, CEO of Redefine International, a UK real estate investment trust, echoes these sentiments. “We consider that the five-star hotel market is often a return on ego as opposed to a return on equity,” he says. “We prefer three to four-star as they tend to run on an overall higher occupancy rate and lower break-even rate. This is because during the week they cater more often for business travellers, while on weekends tourists tend to dominate. A final point about the mid-range market is that in tough economic times people tend to downgrade, which helps that sector in a defensive manner.”

The main challenge, according to Härle, is “that, unlike an office building, the occupancy and cash flows of a hotel are more exposed to micro-influences such as bomb alerts, terrorist attacks and environmental phenomena”. He says: “Cash flows are therefore not as stable and institutions investing in a business are taking on operational risk – but they expect to be compensated. However, unencumbered by leases, hotels are quick to benefit from an improvement in the economy, rising room rates and tourism numbers, and/or the repositioning of a hotel, whereas the options available to offices are typically more limited until after the lease expires.”