The Top 150 manage more than €4trn in assets, and the fastest growing sector is logistics. Richard Lowe reports 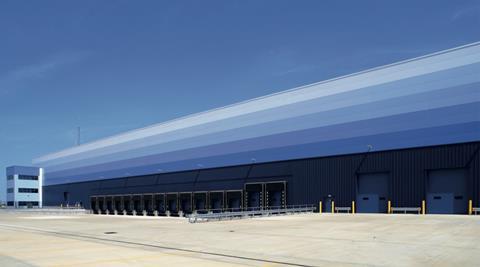 G-Park Northampton: One of GLP’s logistics assets in the UK

If there has been one sector that has topped every real estate investor’s shopping list in recent years it is logistics. It is a familiar story now: the rise of e-commerce has fuelled huge demand for distribution warehouses and last-mile facilities. The fortunes of logistics property have essentially gone in the opposite direction to those of retail property, which has seen rising vacancy and corrections in pricing. COVID-19 has simply accelerated the phenomenon.

With tenants requiring space and institutional investors desperately seeking to capture the growth in the market, the opportunity for real estate investment managers to satisfy both sides has been obvious for some time. Those not already active in the sector moved in, while those already established sought to become bigger.

Blackstone is an obvious example, having made very large moves in recent years. Only last year, the company acquired an US$18.7bn (€15.8bn) industrial portfolio from GLP in 2018, and then launched Mileway, an €8bn last-mile European logistics platform. Unfortunately, Blackstone does not appear in the Top 150 sector breakdowns as the company is unable to provide the data to IPE Real Assets.

Another smaller example is Meyer Bergman, which rebranded as MARK this year. Two years ago, it decided to expand beyond its traditional retail-only strategy into logistics, and this year it plans to diversify into other sectors.

The growth in logistics AUM can be seen in the numbers. Logistics always represented a relatively small share of institutional real estate portfolios, but its share of the AUM managed by the largest investment managers has risen at such a fast pace that is has almost caught up with retail (see page 48). According to IPE research, industrial AUM has more than tripled from €151bn in 2015 to €551bn. Retail, meanwhile, has only increased by two-thirds over that period, from €347bn to €575bn.

The companies that have benefitted the most from this growth are the industrial specialists, and it is no surprise to see GLP, Prologis, Goodman and ESR in the top four positions. Prologis is largest in Europe and the Americas by AUM. GLP is the largest in Asia-Pacific and, for the first time, globally.

“The big winner absolutely is logistics,” says Ralf Wessel, managing director of fund management at GLP. “There is a wall of capital trying to find its way out of retail and out of hotels and into logistics. The reality is what happens from COVID is a tremendous acceleration from physical shopping to online shopping. Obviously, we all saw that trend coming for many years, but the e-commerce penetration rate is growing fast,” he says. “Generations that were still hanging on to physical shopping were forced to find their way to online shopping. That is just a huge shift in the sector.” Wessel says COVID-19 has provably accelerated the process by “who knows, three to five years?”.

This picture, combined with investors seeking “safe havens for capital whilst rebalancing their portfolios”, according to Wessel, means GLP was able to raise €1.1bn for its latest European fund, GLP European Income Partners II. In October, it entered into a joint venture to invest US$1.5bn in logistics in Vietnam.

Meanwhile, Prologis, had a record year for capital-raising in its private funds business, drawing over US$6bn last year. Martina Malone, managing director and head of global capital raising, says: “It was an exceptional year and the largest capital raising that the company had ever had.”

Prologis manages 10 funds, three of which are large open-ended vehicles that serve the US, Europe and China, respectively. The investor base for the funds is deep, with over 100 investors in each of the European and US funds. And despite 2020 being a “tricky year” with some investors placing a moratorium on new investments, fundraising has remained robust at US$2.7bn so far this year.

“At times like these, when investors cannot do onsite due diligence – they can’t meet new managers – they tend to re-up with existing managers and we have definitely benefitted from that trend,” Malone says. But a “significant amount” of the US$800m raised in the third quarter of this year came from new investors. “So they have decided to invest with us despite the fact they haven’t met us in person,” she says. “The brand and track record helps significantly.”

After GLP, Prologis, Goodman and ESR, the next largest logistics players in the Top 150 are some of the biggest generalist real estate managers, including PGIM Real Estate, CBRE Global Investors and Clarion Partners. In fact, Clarion Partners is itself somewhat of a specialist, with industrial representing the biggest slice of its AUM. Of its €50.1bn under management, €19.2bn is in industrial, above offices (€12.4bn), which is typically the largest portion among institutional groups.

David Gilbert, CEO of Clarion Partners, says: “We have been investing in the industrial sector for more than 30 years.” Seven years ago the company began advising its institutional clients to overweight the sector, and today it manages a portfolio that encompasses some 195m sqft of industrial space.”

Like Wessel and Malone at GLP and Prologis, the huge demand from both ends of the investment chain – the tenants and investors – has not been lost on Gilbert. And this led Clarion Partners to expand into Europe last year with acquisition of Gramercy Europe.

Gilbert says: “Investors have been asking us for quite some time for other solutions to expand their investment opportunities in logistics and warehouse properties. At the same time we have a lot of our tenants asking us… about expanding to Europe [to] help create solutions to their space needs.” That combination prompted Clarion Partners to look for “the best operating platform we could find” in the region.

And it should be noted that the acquisition of Gramercy Europe, led by net-lease veteran Alistair Calvert, marks Clarion Partners’ first move into Europe. For the moment, it does not have plans to diversify into other sectors in Europe. “For the immediate future our focus is solely on industrial,” says Gilbert. “We see the greatest opportunity at the moment to expand our focus in the sector we’re seeing the most attractive fundamentals, demand from tenants, investor interest… and that happens to be in logistics.”

He adds: “What we are seeing in the US is still continued unbelievable demand for e-commerce, notwithstanding this contraction in GDP. Typically, in this kind of economic downturn you see quite a negative impact across every single aspect of a real estate portfolio. I think it is the first time in history I can think of where we have a unique standout among the four or five major property types.” 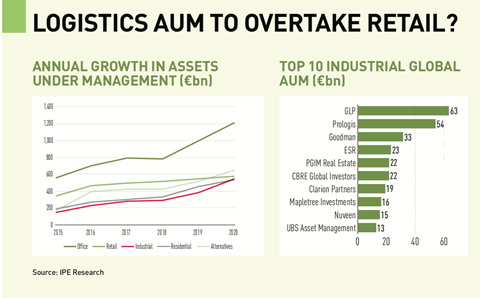 However, is this race into logistics by fund managers and investors alike sustainable? Is there a danger of diverting such a weight of capital to a relatively small, fast-evolving sector that often involves small lot sizes?

Logan Smith, head of logistics for Europe at Hines, says: “One thing about logistics is there’s just not that much of it compared to other asset classes.” If every investor allocates to the sector, “the amount of money going to a relatively small amount of product can cause more rapid fluctuations in price”, he says – “without a real sensitivity or appreciation for what is good, what isn’t good, or for why a particular building might be strong or why another one might not. That is often overlooked.”

Smith joined Hines in July to head European logistics, he moved from Aevitas Property Partners. His appointment suggests that Hines has ambitions to grow its logistics footprint. The investment manager is the third-largest in the world, according to IPE Real Assets’ ranking and the largest manager of office assets. But in logistics the firm does not make the Top 10, its €3.86n of assets represents only a fraction of its €128bn in total AUM.

However, the company has a long history of investing in logistics – since 1957. Smith says: “Hines isn’t known for logistics – in the sense that it might be known for other property sectors – but in fact if you look closely there are meaningful track records already in most countries. It’s just they’re not screaming it from the rooftops like others. It makes my role a little bit easier – as a logistics specialist coming in with all this experience. I’m not starting from a standstill.” 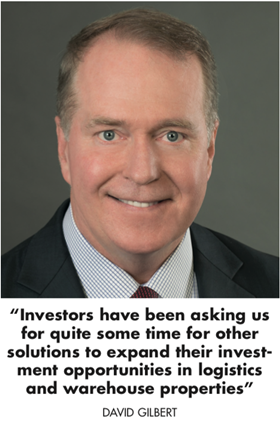 And while Hines, like many real estate managers, has ambitions to grow, its intentions are “a little different from just wanting to get bigger in logistics generally as an asset class,” Smith says. The company has a long track record in major urban developments around the world. “One thing that Hines brings to the discussion is an appreciation for what logistics is within the context of real estate and within the context of a city.” The company is probably set apart from others in its “appreciation of how logistics assets fit into the context of the urban environment and the living environment”, he says.

In the race for logistics expansion and dominance, there will no doubt be winners and losers – or at least the outperformers and under-performers. The onus is therefore on real estate investment managers to differentiate themselves, while investors are under pressure to deploy capital into a market being served by a growing roster of potential service providers.

The big four specialists that sit atop the pile of logistics managers are striving to stay ahead of the game. Malone says that Prologis is doing this in two ways: listening to its tenants and providing much more than just buildings; and providing investors in its funds access to its development pipeline. 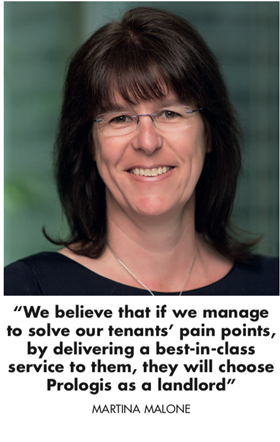 “We made a big push into listening to our customers’ pain points and really focusing increasingly on customer centricity,” says Malone, referring to the first point. “We believe that if we manage to solve our tenants’ pain points, by delivering a best-in-class service to them, they will choose Prologis as a landlord over anybody else – and we can create value beyond the real estate.”

An example of this is Prologis Essentials, a brand that provides access to products and services; tenants can buy forklifts, LED lighting, solar energy, insurance, maintenance directly from the landlord. Prologis Ventures and Prologis Labs, meanwhile, are designed to stay ahead in the world of technology.

These endeavours are intended to improve occupancy, values and ultimately performance for investors. Then comes the second point: Prologis’s core funds have first refusal on proprietary developments. Prologis buys land, develops assets, finds tenants and, once fully leased, offers the buildings to the funds off-market. “In a market with such a fierce competition,” this is a significant advantage, Malone says.

“Lots of non-sector-specific funds and managers raised capital for logistics and want to put that capital to work,” she says. “You can imagine what the third-party market is like out there. [For] anything that sells, there is a huge bidding process going on, and so there is a really fierce competition and that has an impact on pricing – especially on the high-end core side where most of these investors want to invest.”