The IPE Real Assets top 100 ranking of some of the world’s largest infrastructure investors has captured more than $467bn (€388bn) in infrastructure assets held by pension funds, sovereign-wealth funds, insurers and other institutional capital owners.

It was based on IPE Research survey data, Rainmaker information and publicly available information, predominantly in the form of annual reports. Where accurate numbers were not available, estimates have been made. Some investors have not been included due to a lack of information.

We also asked investors about their allocations, investment intentions and views on the market. This survey was conducted between late June and early August, amid a very different scenario to previous years. The COVID-19 pandemic is the biggest test for the asset class following substantial growth in the decade that followed the global financial crisis.

Although transport infrastructure assets – toll roads and airports – have been adversely affected, the asset class, as a whole, seems to be passing the test and living up to its reputation as a stabilising ingredient in multi-asset portfolios. More than two thirds of investors say COVID-19 has had no effect on their infrastructure investments (figure 20).

Furthermore, 57% of infrastructure investors expect to invest or commit a greater volume of capital over the coming 12 months, and 27% intend to maintain the same level of investment (figure 5). As for allocations, 62% expect theirs to rise and 35% plan to maintain current levels.

The findings are consistent with anecdotal evidence. “Overall, the infrastructure portfolio has performed well through the pandemic, with positive returns year-to-date, which reflect a well diversified portfolio,” says Tim Formuziewich, managing director of Infrastructure at Investment Management Corporation of Ontario (IMCO), which manages investments for the Ontario Pension Board and the Workplace Safety and Insurance Board. 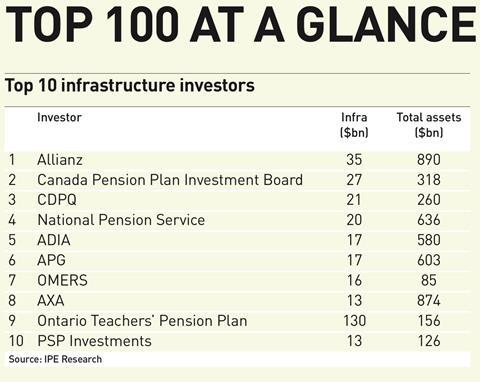 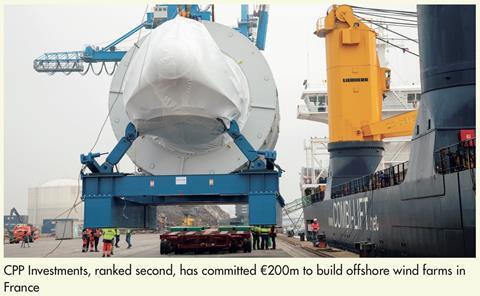 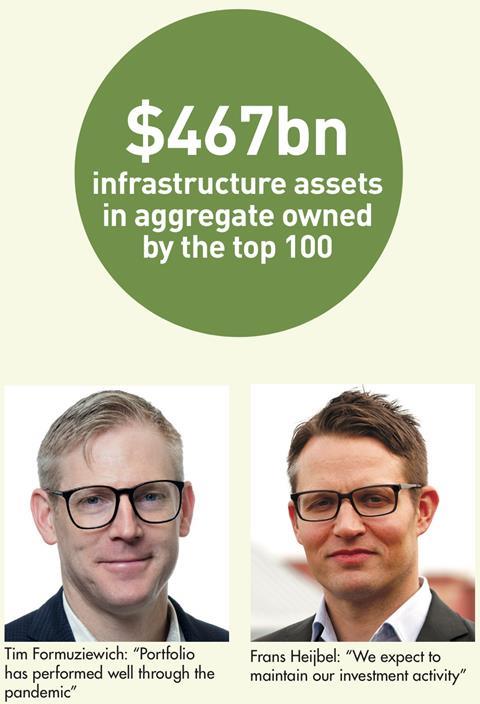 Over the summer, IMCO invested in fibre network company euNetworks alongside Stonepeak Infrastructure Partners. “We actually anticipate a significant increase in investment activity throughout the rest of 2020 and continuing into 2021, relative to the first half of the year,” says Formuziewich.

Neil King, managing director and head of infrastructure for Europe at Canada Pension Plan Investment Board (CPP Investments), says: “As with all investors, we have seen some impacts across the portfolio, particularly on the toll roads. The advantage we have is we invest in infrastructure for the very long term, which allows us to deploy our capital to best effect and to be patient across economic cycles. 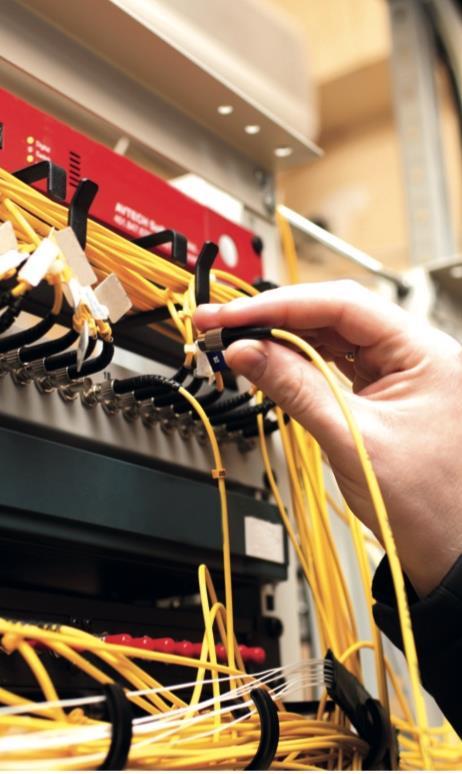 “Our view of the crisis and the consequent economic weakness we will see across the world can be taken in that light, and so as long as life returns to normal over a sensible timeframe, then over the long term the value impacts will be low.”

While limitations on travel and in-person meeting are “slowing things down in the short term”, King says “we are carefully monitoring the markets for investment opportunities”. He adds: “We have seen increased market activity levels in recent weeks and we anticipate those will continue to increase as the practical barriers are reduced.”

And echoing the findings, neither IMCO nor CPP Investments is planning to change their strategies as a result of the pandemic. “No, we remain committed to our strategy of building a diversified portfolio with absolute-return targets,” Formuziewich says.

King says: “We aren’t planning any major changes to our investment strategy.”

Asked whether Alecta has been tempted to change its strategy at such an early stage, he says: “Not really, as our strategy was always meant to create a portfolio with relatively stable and predictable returns uncorrelated to the economic cycle.”

The entrance of Alecta, which is one of the largest institutions in Sweden, shows the ongoing appeal of the asset class to major investors that have yet to gain exposure. Of the 30% of survey respondents that do not invest in infrastructure, half say they might invest in the future and 13% have definite plans to do so.

The main impediment to investing in infrastructure seems to be the size of investors, making it difficult to make a meaningful allocation to the asset class (figure 3). Of those investors that do not invest in infrastructure, only 19% were not persuaded by the risk-return profile or diversification benefits. This proportion was down significantly on last year’s 41%.

Illiquidity, unsuitability of available products and a lack of suitable external advice were all joint-second as reasons for not allocating to infrastructure. Asked to describe the main impediments, investors cited a wider range of factors:

A common topic about infrastructure is whether the asset class is too expensive. This year’s survey shows that nearly three quarters of investors believe it is not, similar to last year’s 72%, and significantly higher than the 54% recorded in 2018.

“It is expensive compared to historical multiples,” says Heijbel. “But not necessarily relative the current interest-rate environment.”

Formuziewich says: “Certainly, the alpha available in infrastructure has come down in core North American and European infrastructure over the last 10 years. Nonetheless, there are still opportunities to acquire risk on an attractive basis although less systemically than in the past. One way of doing so, that we are focused on, is through greenfield investment. Greenfield moves the needle more for us than some of our peers.”

Only 31% of investors have exposure to infrastructure in emerging markets, and 8% are considering moving in this direction (figure 15).

While most, unsurprisingly, expected transport assets to be most affected by COVID-19 (figure 22), there is a clear investor preference for renewable energy, and telecommunications and digital infrastructure (figure 21).

“Our current core infrastructure portfolio is focused on toll roads and regulated utilities, as well as a growing portfolio of renewable energy across wind, solar and hydro,” says King. “In line with the overall goals of CPP Investments, we are looking to increase exposure in our core emerging markets in Latin America, India and Asia. But we do not have a rigidly defined portfolio construction approach to new investments; instead our key objective is to maximise long-term risk-adjusted returns by backing great infrastructure businesses.”

Formuziewich  adds: “We are looking to build a diversified portfolio with investments that behave differently to each other. We seek to make each investment on a basis that delivers strong risk-adjusted returns with asymmetric returns to the upside. If we can do that consistently, we believe that our portfolio will outperform.”

Social infrastructure came second after renewables and digital, and there is an emerging question about whether institutional investors will move further into this part of the market in a post-COVID-19 world.

Heijbel says: “COVID-19 will most likely change certain behaviours and create future new opportunities for investing in the built environment.”

More than two-thirds of investors have an environment, social and governance (ESG) policy and/or strategy that covers infrastructure (figure 16), and for the vast majority this goes beyond investing in renewable energy (figure 17).

Less than a quarter are seeking to make a social impact through their infrastructure investments, although 35% are considering or planning to do so (figure 18). Only 8% would accept a lower return in exchange for making social impact (figure 19).

“We constantly seek the best investment opportunities that can also lead to a positive impact on society and the environment,” says Formuziewich. “However, our fiduciary duty comes first, and we won’t sacrifice returns themselves.” 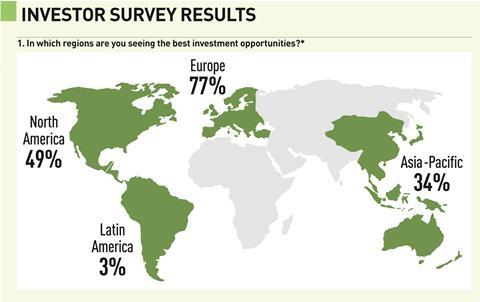 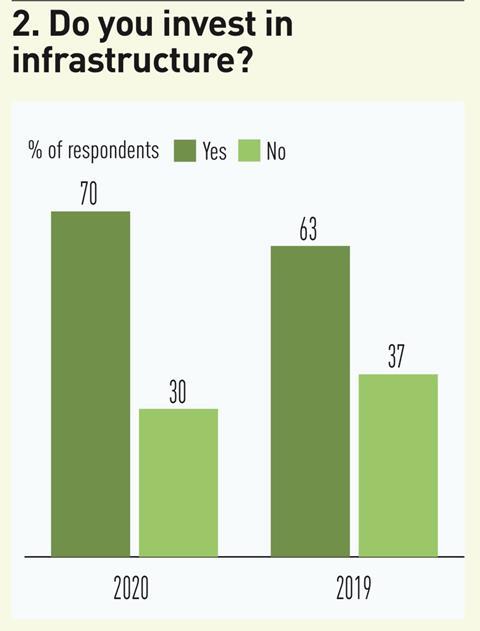 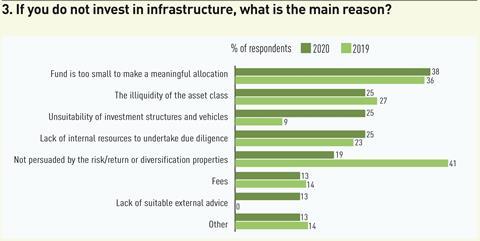 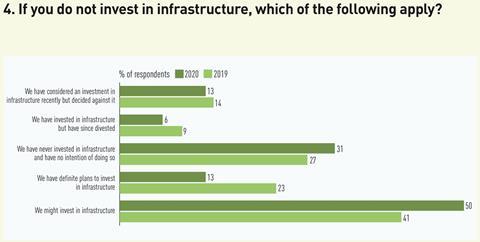 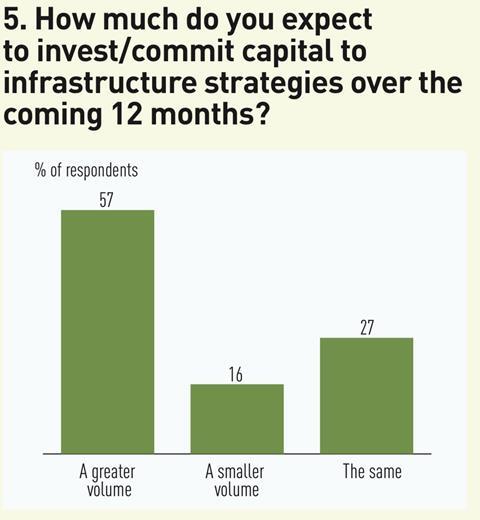 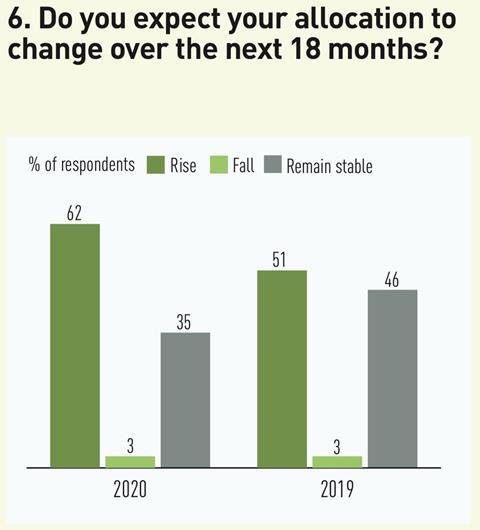 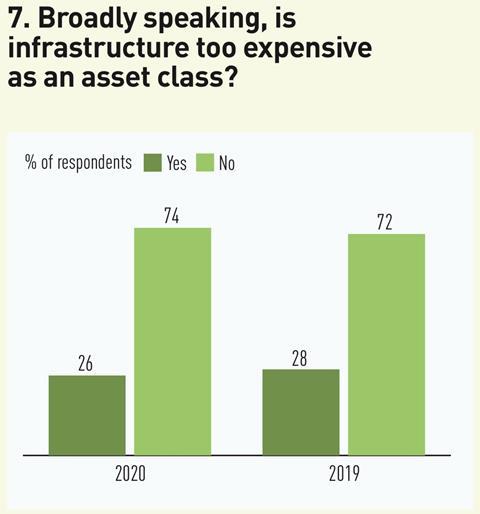 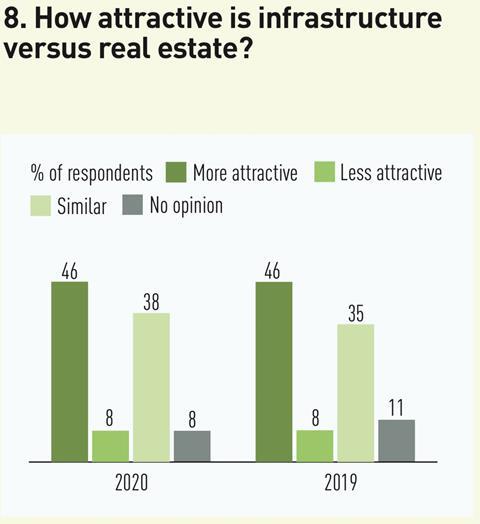 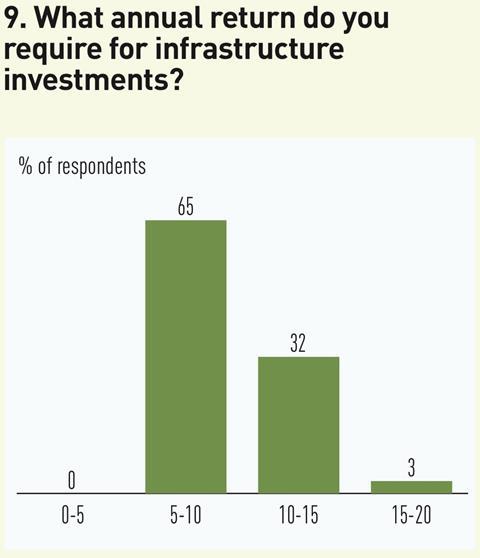 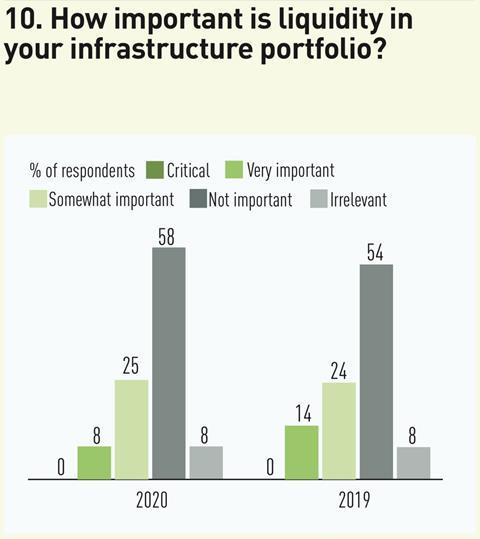 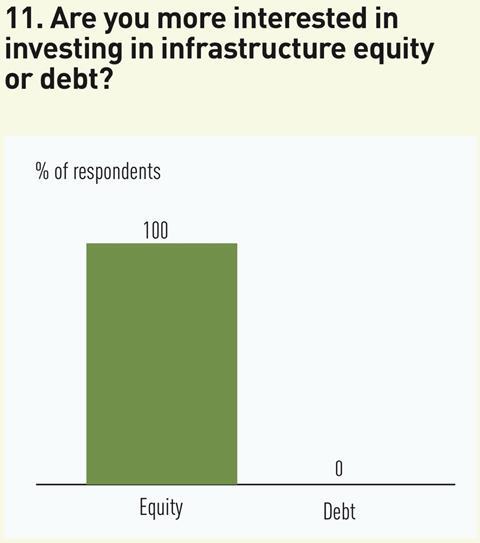 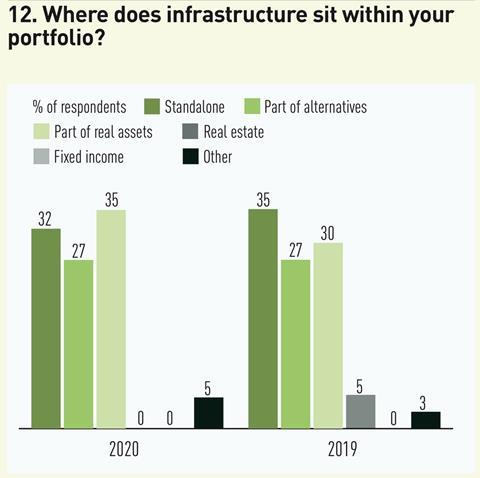 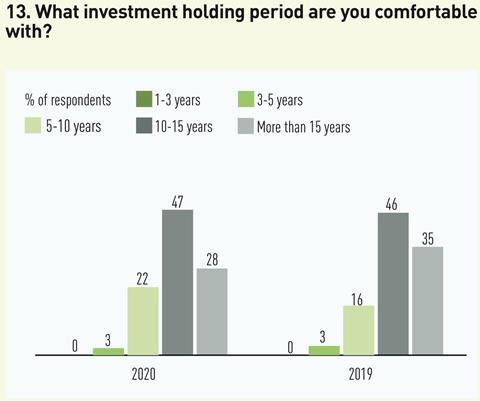 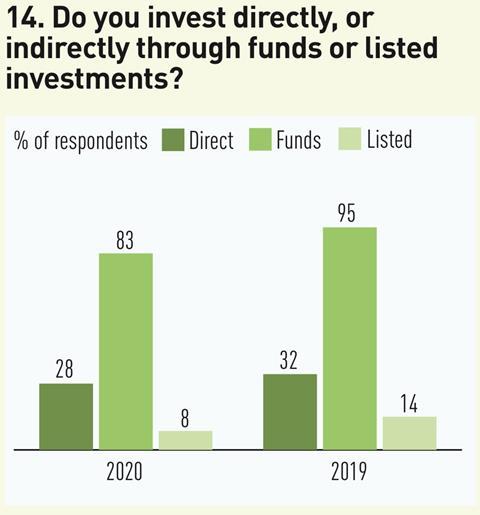 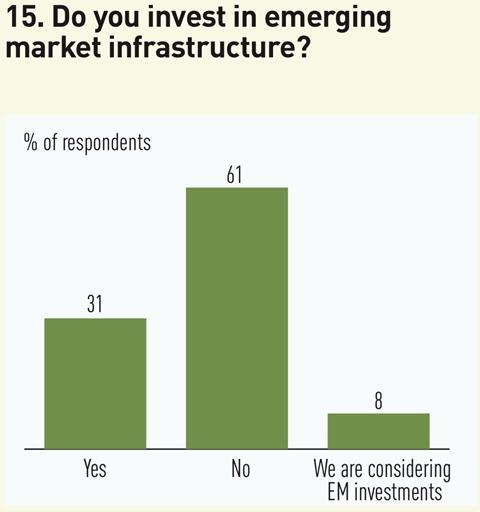 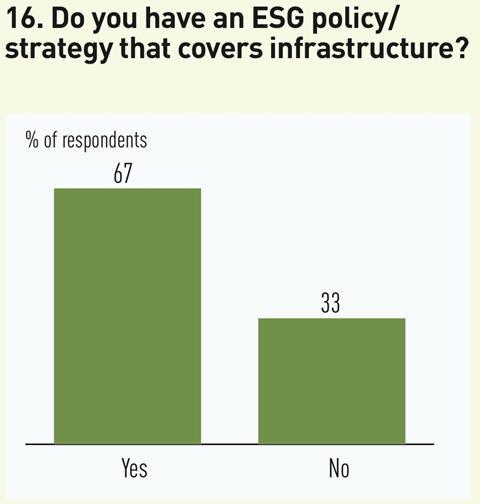 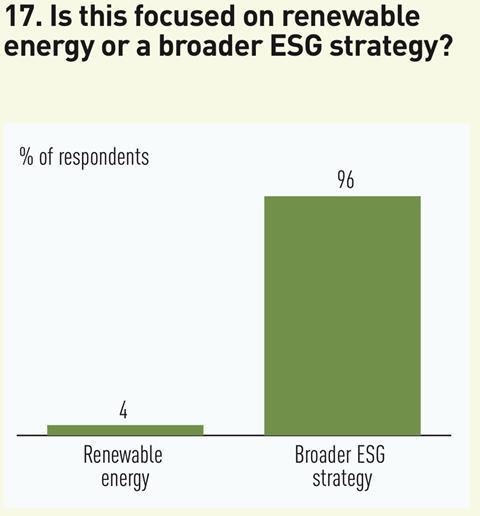 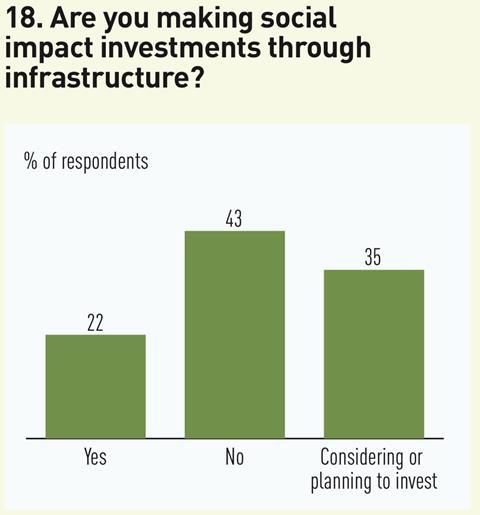 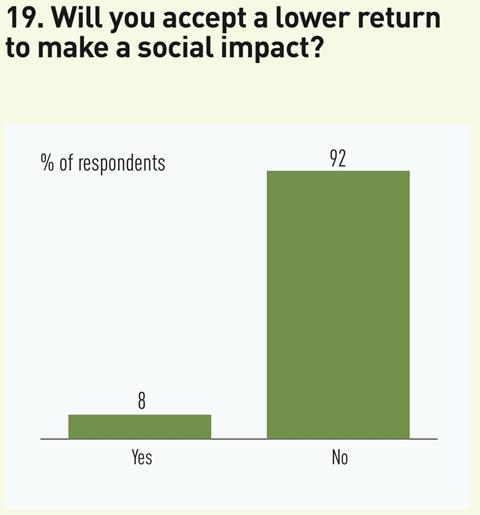 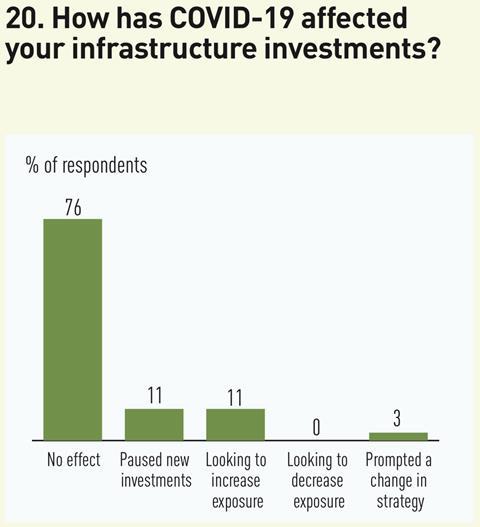 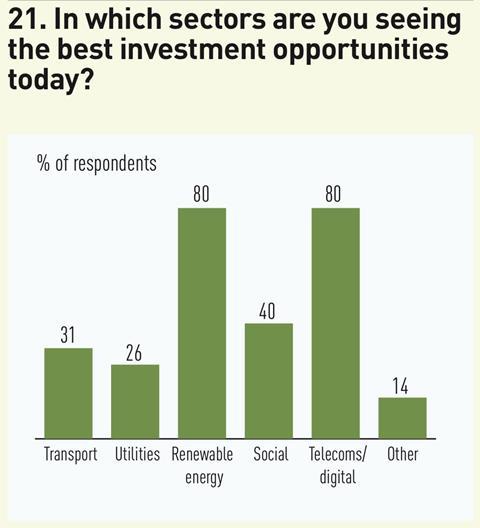 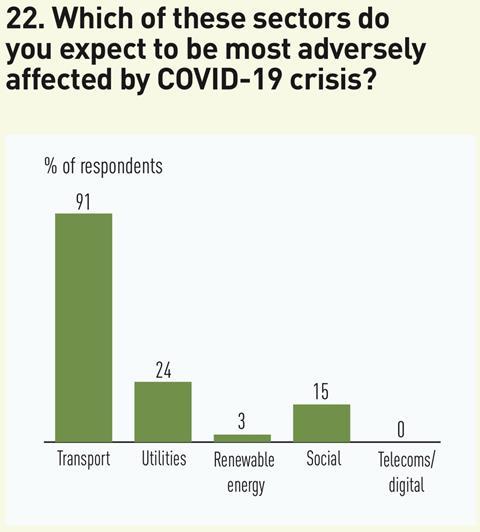