Energy storage: Batteries not yet included

Lithium-ion batteries are the perfect complement to renewable energy generation. But will they become part of the infrastructure asset class? René Lavanchy reports 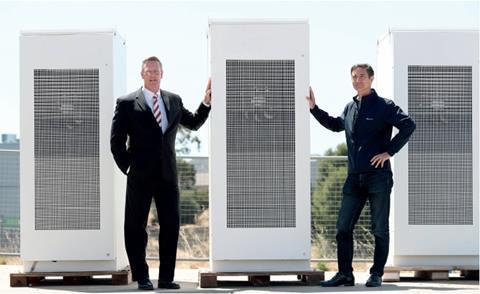 One of the last pieces of the puzzle for net-zero-carbon power generation is falling into place. Lithium-ion batteries, the most popular technology of the moment for large-scale electricity storage, are getting cheaper. According to research by Bloomberg New Energy Finance, the average levelised cost of energy for battery storage worldwide fell by more than three-quarters between 2012 and 2019, faster than that of onshore or offshore wind.

As countries across the world add more and more variable renewable-energy generation to their electricity grids, so the challenges in balancing supply and demand, and stabilising the frequency and voltage on the grid (which can fluctuate dangerously when supply and demand do not match), become more acute. Fossil-fuel power stations, which have become uncompetitive on price, have increasingly relied on being paid to provide backup power and stabilising services. But now this too is under threat. Battery storage is progressively being used to provide fast-response power supply and other stabilising services, across all continents.

Not only are batteries shrinking in cost, they are growing in size and number. Bloomberg forecasts that the global market for lithium-ion batteries, the dominant market leader, will be worth US$116bn (€106bn) by 2030, while battery storage installations will grow from a cumulative 17GWh of storage in 2018 to 2,850GWh by 2040. In the 2000s, battery sizes were in the single megawatts; today they are in the tens or even hundreds of megawatts.

While the future for battery suppliers might look rosy, there is no guarantee that an even cheaper technology will not overtake them in time. In a market affected by regulation and fast-moving technology, how can investors get comfortable with the risk profile of energy storage?

Energy storage can be provided by a wide variety of technologies. Some, like flywheels and pumped hydro plants, are long-established, while others, such as molten salt batteries or compressed air, are yet to mature technologically. But lithium-ion batteries have become the technology of choice for greenfield investors looking to sell storage and other services to utility, industrial and residential customers.

In 2018 lithium-ion accounted for over 90% of all grid-connected new energy storage deployed, including non-battery technologies, according to the consultancy Wood Mackenzie. Yet lithium-ion batteries have considerable limitations. Most operational installations can only supply about one hour’s worth of power, and the maximum that new projects are expected to provide is four hours; their useful life is only 10-15 years – less than wind or solar farms, let alone hydro or thermal power – and they degrade towards the end of their life, leading to reduced efficiency. Vanadium flow batteries, which have also been deployed at utility scale, can last more than 20 years and supply power for eight hours. Lithium-ion has other advantages, however.

“The technology is well known, it has a 75-90% efficiency, it has good energy and power density,” says Dajani, who has worked with renewable energy investors such as US energy holding company NextEra Energy Resources and GE Energy Financial Services. “[Suppliers] also provide very good warranties and, as such, you have more bankability.” Another factor in the technology’s favour, Dajani adds, is the recent oversupply of lithium-ion batteries, which has caused a slump in prices.

Alongside its relatively short lifespan, another feature that sets battery storage apart from traditional infrastructure is the range of different revenue streams on which it relies. One source of revenue comes from capacity markets, which exist in countries such as the UK, Ireland and France, as well as in parts of North America. These markets award contracts to suppliers that promise to increase capacity when demand exceeds supply. Battery storage competes alongside other providers, such as gas and coal-fired plants, but it is playing an increasingly important role.

Grid operators can also use storage to provide balancing services, which bypass congestion on the grid to deliver power to where it is needed, or to absorb excess power. In addition to capacity and balancing, operators can also procure so-called ancillary services from storage assets, such as frequency and voltage regulation. This requires a fast response – in a matter of seconds or less, as system frequency can drop sharply in that time – which batteries are well equipped to provide.

Beyond grid services, storage can serve residential and commercial and industrial (C&I) consumers by providing load shifting, in which the batteries charge during periods of low demand and supply cheap power to the consumer when demand – and prices – are high. Storage can also perform the reverse function of energy arbitrage to dispatch cheaply acquired power back into the grid when prices are higher. To this end, renewable energy developers are increasingly pairing their wind and solar farms with batteries.

With increasing renewables penetration on an electricity system, periods of high wind and bright sunlight increasingly depress power prices, creating an incentive to store power and dispatch it when prices recover – or even to use the whole system as a capacity provider. This was the business case behind NextEra Energy’s announcement last year that it would build a 200MW battery next to a combined 500MW wind and solar farm in Oklahoma, in response to a capacity procurement exercise. Had this happened five years previously in the US, it would probably have resulted in a gas-fired peaking plant being built. All these uses vary between markets, and adapt in accordance with market and regulatory conditions.

“We see the highest-value use for our assets is frequency right now,” says Alex O’Cinneide, chief executive of Gore Street Capital, which manages a listed energy storage fund with 189MW of battery-storage projects in operation or under construction across the UK and Ireland. “Batteries are a really good solution for [frequency regulation], because batteries at 50% full can be both a generator and a consumer.”

O’Cinneide’s storage projects have from the outset relied on three revenue streams: frequency, capacity, and so-called triads – essentially load shifting for large UK industrial power users. Frequency contracts have lasted three to four years, but are getting shorter; capacity contracts and triads can run up to 15 years.

“Lithium-ion is the go-to technology for a developer seeking debt financing, and these lithium companies are dominating market share” - MONA DAJANI

“Our job as the manager is to manage those [contracts], so we are constantly evaluating what revenue contract our assets should be in for what period of time,” O’Cinneide says. Ireland’s grid operators offer five and six-year contracts for frequency and other services, in addition to capacity contracts. Gore Street’s projects deliver an unlevered internal rate of return of 10% or more, he says, assuming zero terminal value; the fund acquires projects at the shovel-ready stage.

Capacity and frequency response payments are based on availability, while balancing services are volume-based, as are any sales into the spot market. These streams interface in different ways and need to be prioritised. O’Cinneide says: “Do we want to have a six-month contract in a year’s time, or do we prefer to look at another revenue stream that might be available closer to the time? We lock in a certain amount of revenue to make sure we’re generating an acceptable level of return, and then within that, we try and maximise the return for our investors.” Gore Street’s storage assets, which are 100% equity financed, pay themselves back within three to five years, he says.

Core-plus or positively risky?
Whether this performance looks like an infrastructure investment with 20 to 30-year offtake contracts and slowly amortising debt is another matter. Matthew Vickerstaff, deputy head of the UK’s Infrastructure and Projects Authority and a former global head of infrastructure at Societe Generale, told a Westminster Forum conference in London that battery storage and network resilience assets did not belong in a core infrastructure portfolio.

Mark Sandys, Principal for infrastructure equity at AMP Capital, takes a similar view to O’Cinneide’s of the business strategy for energy storage. “How we try and make this investable is to find a business that has a significant contractual underpin to provide that cash-flow stability that could perhaps support debt financing, with a view that any merchant power price exposure merely serves to provide upside.” But executing that strategy, as Sandys notes, is not so simple – AMP Capital has yet to make a storage investment.

One way of achieving cash-flow stability would be to supply major C&I users, including electric vehicle charging points, as part of a ‘private wire’ network, where most of the electricity supplied would not be dispatched into the wider grid but consumed by nearby users.

“That’s potentially interesting… we haven’t yet actually seen a business tangibly deliver upon that, but we’ve seen the concept,” Sandys says. He notes that supplying industrial customers, which are essentially looking for sizeable energy savings, is a long and risky process – the data needed to work out the business case is not public and the lead-in time is lengthy.

But it has been done. Macquarie Capital closed a project financing for 50MW of battery storage projects serving large-scale consumers in southern California in 2017.

O’Cinneide argues that storage investors do not have to take the regulatory risk associated with contracted renewable-energy projects, nor the energy price risk, and they enjoy a much higher return. An infrastructure investor, he argues, should ask: “‘If I looked at your asset, what is the average length of the time you’re contracted for over the lifespan of the asset, and within that, what the return do you give me?’ And that ends up being a very good risk [weighted] return”. A key risk, he notes, is the quality of the several contracts the asset managers must negotiate over the asset’s lifetime.

As well as revenue risk, battery storage investors have to contend with the 10 to 15-year lifespan of batteries and their degradation over time. Sandys argues that an individual storage asset can be seen as a longer-term platform. “What we’re trying to uncover is a development platform with embedded expertise,” he says. “While you can recognise that maybe the battery cells have a finite lifespan, the balance of plant is long-term infrastructure.” Providing flexible power to the grid is, Sandys notes, highly specialised.

In addition to engineering expertise, geography adds to the specialised quality of energy storage. The projects only make sense in certain locations relative to the grid and to large-scale consumers. This barrier to entry, at least, is an infrastructure-like characteristic.

Institutional investors and infrastructure funds are clearly still getting comfortable with energy storage. Gore Street’s energy storage fund does not appear to have any infrastructure investors among its top 20 investors – although AXA is there, and the biggest investor is Ireland’s National Treasury Management Agency. One exception is Foresight Group, which invests in battery storage and which in January closed a €342m pension fund-backed energy infrastructure fund with a mandate to invest in storage among other assets. For now, most of the equity seems to be coming from developers and utilities.

Lithium-ion batteries’ dominant position may not last forever. John Flørning, lead consultant at engineering consultancy Ramboll, argues that, in time, hydrogen produced from electrolysis will take over as the preferred storage technology, because it can be stored for indefinite periods of time and increasing amounts of renewable generation will lead to increasing zero wholesale power prices at times of oversupply, making hydrogen cheap to produce. In the meantime, batteries can provide an attractive financial return, once the complexity involved in developing and operating them has been navigated.

“It’s critical to understand the battery’s ability to store energy as it ages, and the factor of cost and replacement. That is not a data point that you see in traditional infrastructure,” Mona Dajani says. “We have to understand all these different intricacies and variables and it’s very, very complex.”