9
Telecoms: Towers in the sky
Sectors

Telecoms: Towers in the sky

Google’s project to create a network of balloons in the stratosphere is the latest blue-sky thinking revolutionising the world’s telecoms industry. Christopher O’Dea  investigates

Voracious demand for mobile computing power and wireless communication capacity to connect mobile users to the internet has pushed competition in the telecommunications industry to the edge of outer space. This has been good news for tower infrastructure companies in developed markets and emerging Asian nations.

The stratosphere is the upper limit of Earth’s atmosphere and it is where Google is testing Project Loon – a network of balloons ostensibly intended to provide internet access to the two thirds of the world’s population not yet connected to the web. The network, a herculean technological undertaking, is designed to connect people in rural and remote areas, help fill coverage gaps in ground-based networks, and bring people back online speedily if disasters disrupt internet access.

Google is aiming its initial coverage at Indonesia, Sri Lanka, India and New Zealand. Project Loon would connect some of the world’s largest populations to the internet by beaming wireless signals to earth from cellular nodes floating about 20 kilometers above Earth. That could add tens of millions of users to a global mobile network already expanding at escape velocity – global mobile data traffic is expected to grow at an average annual rate of 53% from 2015 to 2020, according to forecasts from networking equipment manufacturer Cisco. In the US alone, Cisco says, mobile data consumption grew 56% in 2015.

“The year-over-year growth alone represents a staggering amount of data consumption,” said Crown Castle International CEO Ben Moreland on the cell tower company’s first-quarter conference call in late April. The annual increase in traffic “is almost equivalent to all the mobile data that crossed the cellular networks in 2013”, he said.

While its promise of affordable internet for everyone based on balloons is often heralded as a threat to prevailing telecoms business models based on ground-based cellular towers, Project Loon will not so much replace cell towers as complement terrestrial networks, while accelerating prevailing trends towards ever-smaller, more localised network nodes. 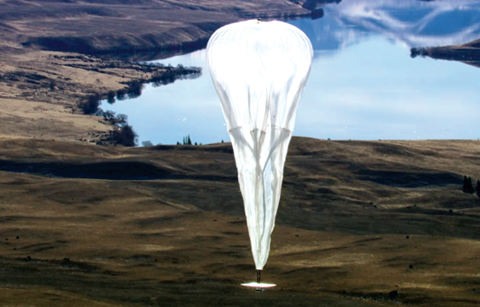 It may be some time before institutional investors can deploy capital to Google balloons. But Project Loon illustrates how the telecoms industry is building a global communication network with a more distributed and cloud-like architecture. Emerging 5G (fifth generation) technology, which is expected to reach the market in the next two to three years, will increase existing mobile download speeds 10 to 100 times, taxing communications infrastructure and driving demand for more macro-cell towers, small cells using capital-light fibre connections in urban areas with high data demand, and distributed antenna systems that broadcast wireless connection signals in small areas.

As with any technological transition, there will be winners and losers. The tower companies that are adapting their business strategies and operations to meet growing demand for small-scale, high-capacity coverage are best positioned to reap the economic rewards being created by the advance of science. Tower companies, including REITs Crown Castle and American Tower in the US, build networks of communication towers and lease the capacity to mobile-phone vendors such as Sprint or T-Mobile.

Project Loon embodies two of Silicon Valley’s most vital qualities – engineering prowess and entrepreneurial spirit. The system is a heady mix of airborne algorithms, advanced materials, and eureka moments about the best way to launch and position balloons to provide continuous connections. The project aims to function much like terrestrial tower networks, carrying mobile data between users. But there the similarities end.

Project Loon’s ambition is to bring mobile access to everyone, anywhere – and potentially quickly – by deploying mobile communications gear in a fleet of signal-processing nodes dispersed in the wind currents at the edge of the earth’s atmosphere. Small boxes tethered underneath each balloon contain chips that control the vessel, radio antennas to communicate with other balloons and with internet antennas on the ground, and lithium-ion batteries to store solar power so the balloons can operate round the clock.

The balloons float in the stratosphere, roughly twice as high as the level at which airplanes fly and the weather takes shape. The stratosphere is composed of numerous layers of wind, each varying in direction and speed. Loon balloons go where needed – internet access in tow – by ascending or descending to a layer of wind moving in the desired direction of travel.

According to Google’s Project Loon technology summary, the system expands the reach of existing mobile networks. “By partnering with telecommunications companies to share cellular spectrum, we’ve enabled people to connect to the balloon network directly from their phones and other LTE-enabled devices,” Google says. “The signal is then passed across the balloon network and back down to the global internet on Earth.”

Things get more complicated in practice. Like ancient mariners, Loon balloons are dependent on constant – and constantly varying – wind currents. With that in mind, Project Loon aims to provide continuous internet connection not by keeping balloons stationary over a given location, which would require energy and propulsion to work against winds that can reach speeds of 300 kilometers per hour, but by co-ordinating the fleet such that when one balloon leaves a location another moves into its place. Each balloon stays aloft for about 100 days, and provides connectivity to a ground area about 80km in diameter.

While Google benefits from the PR of showing students in remote regions of Brazil enjoying their first internet-based geography lesson, there is a commercial incentive behind Project Loon – new internet advertising customers are hard to come by in developed markets already blanketed by internet service over wireless and wired networks. Facebook has also joined the mobile internet space race, readying solar-powered drones intended to give limited free internet access to populations not connected to existing cellular networks.

The commercial potential of airborne internet networks is illustrated by Project Loon’s initial target market – Indonesia, where an expanding middle-class is increasingly using smartphones in daily activities including e-commerce, video calling and streaming. This is driving growth of between 30% and 50% annually in the number of smartphone users, according to the Indonesian Cellular Phone Association. And according to mobile commerce research firm eMarketer, the number of smartphone users in Indonesia will rise from 55m in 2015 to 92m in 2019, third in Asia behind China and India. But internet penetration remains low, with only 42m of 250m people in Indonesia having access, according to the CIA.

Indonesia’s top three mobile network operators in the country – Indosat, Telkomsel and XL Axiata – agreed last year to start testing the balloon-powered internet over Indonesia during 2016. While Project Loon could bring internet coverage to remote parts of the 17,000-island archipelago, Indonesia is not waiting for Google to perfect the choreography of high-altitude balloon rotation required to reliably beam signals from the sky. The country’s Palapa Ring project for telecoms infrastructure aims to meet urban demand by bringing broadband services to all 514 regency and municipal capital cities in Indonesia by 2019 by laying 11,000km of undersea fibre-optic cable.

The growth of mobile services is driving consolidation in Indonesian telecoms, leading some telecoms companies to raise cash by selling tower assets. This is favourable for leading listed tower infrastructure companies, such as Tower Bersama Infrastructure and Sarana Menara Nusantara.

In a recent report on tower infrastructure companies in Indonesia and India, Moody’s projects year-on-year revenue growth to accelerate to about 8% to 10% for tower operators in both countries during the next two years. “We expect continued growth in both markets as mobile operators, building out and strengthening their third and fourth-generation footprints, will seek to lease tower space and sell more of their own towers,” the report says.

“Mobile operators are looking to sell their towers and use the proceeds to fund capital expenditure and reduce debt, because – for them – there is a limited strategic benefit to owning towers versus leasing them,” Moody’s says. “Purchasing these towers will help independent operators achieve scale and a competitive edge through expansion of their geographic footprints.”

Prospects for tower companies are similarly bright in developed markets such as the US, where service providers are about to unveil 5G technology.

“Carriers are increasingly turning to small cells as an essential tool to improve their networks,” said Moreland. “With small cells, we are investing in a business model that has the same shared-economic model as towers and we are encouraged by what we are seeing.”

While small cells meet a growing need, Moreland emphasised that “towers continue to play an important role in providing the first layer of coverage and capacity in an increasingly mobile world.”

The scramble by Google and Facebook to tap the revenue potential of hundreds of millions of new viewers of online ads, search pages and YouTube videos highlights the investment opportunity in the tower infrastructure that serve as the backbone of mobile digital commerce, even as Silicon Valley giants compete for control of the skies.

Buying shares in a local tower operator with in-country knowledge and regulatory contacts might be the preferred method for investors outside the region. “The approval process for the deployment of new towers is complex and time-consuming in both countries,” Moody’s says.