US companies are cleaning up in the waste market by targeting ‘internalisation’, the percentage of waste that ends up in landfills. Christopher O’Dea reports

Next time you order a takeaway latte, think about the journey its paper cup makes after you dispose of it. In the US, it is most likely headed for burial in a landfill cell – a high-tech burial ground for solid waste specially constructed to keep everything (even a drop of ink from the coffee shop’s logo) from leaking into the ground over the subsequent 30 years. In much of Europe, those cups are most likely headed to a very different – and perhaps more abrupt – demise: an incinerator that will make quick work of coffee containers and myriad other detritus of modern living.

The nature of the last mile journey for solid waste hinges primarily on geographic constraints and societal norms about pollution. But one thing is clear: solid waste is a fact of modern life, and disposing of it in ways that are safe now – and later – is a 24/7 job.

It is a job that will require capital, says Rob Kupchak, senior managing director of the US power, utilities and renewables group at Macquarie Capital, the Australia-based firm’s advisory and capital markets unit.

This is because garbage is the ultimate renewable resource. More than 250m tons of solid waste is generated each year in the US alone, where waste service providers took in around $59bn in revenue in 2013, a total expected to reach $66bn in 2019, according to IBISWorld. Those fees to waste processors cover collection and disposal, and the steep cost of closing used landfill cells with methods designed to prevent environmental damage for 30 years.

And because waste is produced constantly, its removal is typically handled through multi-year contracts with municipalities and corporations. While most transactions in the industry tend to be initiated by strategic buyers building vertically-integrated operations, the economic features of waste processing are attracting institutional capital, with one early-mover, private-equity investor already preparing an IPO having consolidated several waste companies.

“Waste is a sector that we like a lot,” Kupchak says. “It’s a sector that quite a number of our clients like as well.” Clients range from infrastructure funds to private equity funds, sovereign wealth funds and pension funds. The primary appeal of the waste sector is that it offers institutional investors many of the benefits of infrastructure. Chief among these, Kupchak says, are stable cash flows that are highly resistant to recessionary forces, and the strategic nature of the assets – primarily landfill sites. “Landfills are hard to replicate and create barriers to entry,” which helps insulate revenue streams at incumbent waste firms from competition, he adds.

Most waste disposal and management companies are integrated service providers that own fleets of trucks that collect waste and transport it to landfills that they also own. Companies target a key metric called ‘internalisation’, which measures the percentage of collected waste that ends up in company-owned landfills – the higher the percentage the better.

The model creates an annuity-like revenue stream to companies that own fleets and landfills with permits that meet today’s stringent environmental-safety requirements. The steady revenue stream – in particular from contracts with municipalities that range from three to 10 years – is an attractive feature to pension investors now looking at another year of low bond yields.

All that equipment must be financed. “There’s a real opportunity to invest capital in this sector,” says Kupchak. While alternative sectors like logistics and renewable energy have been garnering the lion’s share of headlines in the capital markets, the waste sector encompasses a broad opportunity set, and full range of channels to invest in both listed and private assets, he adds. 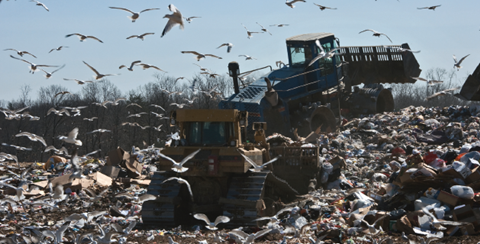 While opportunities in the US waste market differ by region, with companies in areas experiencing economic growth typically posting better performance, there are three broad trends driving the sector now. First, is ongoing organic growth, Kupchak says. Waste trends are correlated with GDP growth, and “as there’s more economic activity, more waste is produced”. The US West and Pacific Northwest, as well as the Southeast, are regions where economic growth is providing a boost to waste service providers.

Second, although not as capital-intensive as some other infrastructure sectors, operating waste collection fleets and landfills does require ongoing capital investment, Kupchak says.

Finally, the waste service market is highly fragmented. With just five large listed companies – two with national footprints and three regional players – serving 57% of the US solid waste market, according to IBISWorld. Much of the waste industry in the US remains in the hands of small private firms which typically provide local collections but lack disposal assets.

That presents an opportunity for larger companies that can consolidate local assets into more efficient collection networks for big landfills and fund the increasing costs of environmental compliance, says Barbara Noverini, an analyst at Morningstar who covers the waste sector. At the national and regional level, scale confers a number of advantages. “Since it is more cost-effective to operate one large landfill than several smaller landfills, many have been replaced by larger, regional landfills that are farther apart,” she says.

Landfill operators, she adds, must have the resources to deal with NIMBY (not in my backyard) opposition, “which can be costly, time-consuming, litigious, and politically charged.” To compete, “vertically integrated operators that can combine financial and legal resources with local market presence have the upper hand”, Noverini says. “Vertical integration effectively controls the flow of waste, keeping competitors out and protecting profits.”

“Private equity has been after waste companies for years”
Barbara Noverini

Instead, says Noverini, Waste Connections “targets landfill ownership or exclusive franchise control in smaller urban, suburban, or rural areas where competition is much less intense”. Once disposal capacity is secured, the company “uses its balance sheet to fund tuck-in acquisitions or capital improvements that enhance route density and operational efficiency”.

While owning land is a “formidable” barrier to entry in the industry, Noverini says the biggest obstacle is government regulation. Although there’s “an abundance of capacity” in the US, with large tracts of unused land far from growing cities, new permits for landfills are “very unlikely in the US,” she says. Regulation can add to waste disposal fees, and “no one wants to pay more to process their garbage.”

But with more than $66bn in revenue potential, investment capital has been finding its way to the waste sector, attracted by the stability of the underlying cash flows from an essential service, and the high barriers to entry protecting incumbent companies and their operating assets. “Private equity has been after waste companies for years,” says Noverini.

Tunnel Hill Partners, founded in 2008 by the principals of American Infrastructure MLP Funds as a platform for acquiring waste assets, has expanded into the Northeastern US from Ohio. Tunnel Hill’s initial investment was the Tunnel Hill Reclamation Landfill site, a 2,200-acre facility served by a sophisticated rail terminal. Tunnel Hill has acquired companies in New Jersey and New York City that own rail loading facilities to collect waste from those markets for disposal in Ohio. The company says the Ohio landfill has 150m tons of permittable capacity – it is currently permitted to accept 8,000 tons daily – while Waste Management ended 2014 with 4.6trn tons of permittable capacity, enough for about 46 years of waste.

High Star Capital, A New York-based infrastructure investment firm, is readying an IPO to realise part of its investment in Advanced Disposal Services (ADS), a Jacksonville, Florida-based company behind High Star’s roll-up strategy in the waste sector. High Star bought ADS in 2007, and in 2012 acquired Veolia Environmental Services Solid Waste for $1.9bn, merging the two to create what is now the largest privately-held vertically integrated waste management company in North America, operating in 18 states in the US and the Bahamas. ADS is fifth-largest by revenues, generating $1.4bn in 2014.

High Star geared its strategy with ADS to the industry’s structure. According the registration statement for the planned equity offering, ADS operates “principally in secondary, or less densely populated non-urban, markets where the presence of large national providers is generally more limited”. It also competes selectively in primary markets “where we can capitalise on opportunities for vertical integration through our high-quality transfer and disposal infrastructure and where we can benefit from highly-efficient collection route density”.

The strategy demonstrates that size matters in the US waste sector. “Due to our scale, our tuck-in acquisition strategy enables us to drive robust inorganic growth despite a relatively small average transaction size,” according the registration statement. Since 2012, ADS has executed 33 acquisitions, primarily of local collection companies that feed its transfer, recycling and disposal assets, which include 39 landfills. The company reports a 65% internalisation rate, on par with Waste Management, the largest North American landfill operator, with 252 sites, which reported internalisation rates between 64% and 67% between the middle of 2014 and 2015.

While recycling is playing an increasing role in waste disposal, most techniques are not yet viable on a commercial scale, Noverini says. Waste Management, which handles 13m tons of recyclable commodities annually, expects recycling operations will have a slight negative impact on full-year earnings per share due mainly to low commodity prices. For now, this is good news for large existing providers. “For a one-stop solution,” Noverini says, “nothing beats a landfill.”