After a disastrous year for UK retail, Mark Faithfull asks whether predictions of plunging shopping-centre valuations will finally materialise and reflect the upheaval in the sector 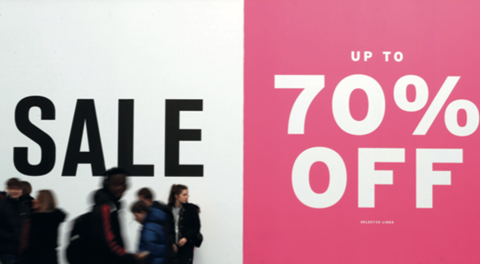 Christmas retail sales in 2018 were the lowest in a decade, and Fidelity predicts property values will fall by as much as 70%

It has been an annus horribilis for UK retail. Like-for-like sales were the worst in more than a decade, down 1.9% at physical stores in December, capping the worst year for monthly sales shrinkage since business adviser BDO began tracking data in 2006 from about 85 UK retailers with a collective 10,000 stores.

Amid downbeat assessments from the likes of Mothercare, Marks & Spencer, Debenhams and John Lewis, fresh administrations and CVAs, the stark reality is that the opening months of any new year are typically the most dangerous for retailers, with the plug often pulled – somewhat cynically – as soon as the holiday season and sales are over. However bad it is right now, it could get worse. Retail bellweather Next did at least offer some respite. Yet while non-store like-for-like sales rose 12%, its store revenue declined 9.2% in the nine weeks to 29 December.

Ed Cooke, chief executive at retail property body Revo, counters that a focus on poorer performers has coloured perception. “My view is that the trading figures have actually been a little more positive than the doomsayers would have,” he says.

Sports Direct’s Mike Ashley hit the headlines in December when he said big retailers faced being “smashed to pieces” by a shopping downturn this Christmas. This and bad weather in November “cast an overly-negative feeling” on the market, says Cooke, “when actually the likes of Next, Tesco, Aldi, George, and Dunelm show that there are some retailers performing well”.

He says making a distinction between channels fails to reflect the way retail has evolved. “In some ways, the fact that Next split its store sales and online sales did something of a disservice, because most purchase decisions involve both and what we really need to do is examine the real worth of stores,” he says. “I’m not pre-supposing the impact on values but the current methods are historical and do not reflect the way retail operates.”

Myles White, head of European retail real estate at Nuveen, says: “There is a fundamental question on the real value of the store. Retailers acknowledge the benefits of store and online working together to increase market share wherever it is transacted, but do not put any value on that halo when looking at store rents. Owners must become more flexible, and occupiers and owners have to work together more closely.”

Indeed, property landlords have been caught in the crossfire and a raft of data from investment houses suggests that a price correction could be on its way. Fidelity International expects UK retail real estate values to fall by between 20% and 70%, depending upon the nature and quality of the asset. This is driven in part by a 10-40% reduction in rents to make them more sustainable and also by a de-rating of the sector equivalent to 10-30%, reflecting the risk profile of the underlying tenants and future cash flows (figure 2).

Adrian Benedict, investment director at Fidelity International, says landlords have been “blindsided” amid the sharpest potential correction in UK retail rents in living memory, with major repercussions for landlords.

Similarly, UBS Asset Management describes 2018 as a “turning point” for retail in its latest report, concluding: “The big question is whether this will be a short-ish lived correction, where values and rents adjust and the sector stabilises at a corrected level. Or whether this is the start of a long and painful downward spiral. Unfortunately, we’ve seen little to convince us that it will not be the latter… as the sector comes to terms with the severe over-supply of physical space in a new consumer environment.”

PGIM Real Estate’s global update points out that global retail REIT values have now fallen about 15% since mid-2016 – in sharp contrast to modest increases in appraised values in the private market.

PGIM adds: “Of course, REITs can be volatile and subject to over-corrections, but much of the recent decline has coincided with a period of rising wider equity markets, so the downward pressure is at least partly attributable to real estate-specific factors. While REIT re-pricing may have gone too far, market participants are simply reacting to the revenue pressures.”

Retail’s share of overall volume has dropped from close to 25% in the early part of the post-crisis recovery to about 17% in 2018 and PGIM notes the prospect of value write-downs without pricing adjustments. “The difference between now and 2007-08 is that most vendors are not in distress and don’t need to sell, because LTV rates are low and capital is still relatively cheap,” adds Cooke. 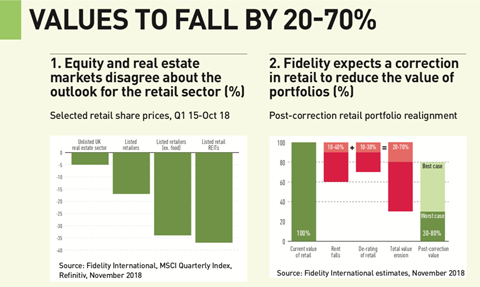 And that could stall the circling vulture funds hoping for bargains. Several years ago a number of specialist investors, notably from the US, swept in to pick up peripheral assets in long-term distress, while companies such as NewRiver have successfully tailored their approach to pick up struggling tertiary assets and turn them into value-driven community centres.

That said, there are signs that the crisis is biting. Recently South Africa-listed New Frontier Properties announced that a sharp drop in the value of its UK retail portfolio prompted the sale of an Irish logistics asset to pay down debt as falling asset values took last year’s loan to value ratio of 60% up to 74% just 12 months later, breaching debt covenants. If more follow, the UK’s five largest property funds are especially exposed. If UK values drop by 20% by the end of the year then M&G Property Portfolio, L&G UK Property, Standard Life UK Real Estate, Janus Henderson UK Property PAIF and Aberdeen UK Property would stand to see £4bn written off their combined assets.

The major retail REITs have been trading at around 30% below NAV for the past three years, suggesting that the market has priced in write-downs already. Yet by the same token, most of the major players no longer refer to their locations as shopping centres but are focused on ‘place making’. Beyond the marketing spin, there is a tangible element to this because exposure to retail has been reduced by substantial leisure, F&B and residential components.

“For some time, retail environments have been transforming from inventory centres to multi-

experience spaces. The transformation is blurring the lines between retail, leisure, restaurant and gaming,” says White. “The food and beverage offer is a key element and when centres get this right, they create not just an exciting business for the F&B operator but a very significant sales uplift for the surrounding retailers.”

And of course not all destinations are made equal, says John Duxbury, head of retail and leisure at M&G Real Estate. Super-regional centres and flagship malls have fared far better than secondary malls over the past decade, helping to protect them from the worst of store closures and attracting new online players and brands-turned-retailers.

“The major centres generally achieved really strong footfall over Christmas, so this is not impacting all centres in the same way,” he says. “We still strongly believe in centres with the right offer in the right locations but when it comes to secondary, what we’re interested in is what sort of opportunities they might provide, and that’s not just about retail.”

Duxbury says that the future for many such centres may well be reducing the retail to accommodate better performing real estate segments and uses, such as residential in the larger cities. However, he stresses that government needs to do more to “provide the toolkit” that makes this financially viable and helps expedite the process for developers.

“To do the asset management, improvements and construction necessary there has to be a defined return on investment,” he adds. “It’s not realistic for that to happen if retailers demand extended rent free periods, capital packages and flexible leases. What we really need is an open approach from everyone and some transparency from everyone. Without that it’s not surprising that investors will look nervously at the sector.”

Those developing and asset managing in the UK are also moving away from traditional models. The rise of food emporiums, plus the latest projects such as Coals Drop Yard at Kings Cross also suggest that new schemes will look distinctly different. The biggest currently under development is in Edinburgh, where the new retail scheme will be anchored by a hotel, residential, a gym and cinema.

“New development projects in city centre retail are showing how we can innovate in mixed-use space to improve wellness and connectivity,” says White. “We believe mixed-use retail space and the better creation of ‘lifestyle centres’ will offer the best opportunity for investment over the medium term. Long gone is the zoning of cities as people want to live, shop, work and play in integrated and connected spaces. Lifestyle centres can include large redevelopment projects, such as our Edinburgh St James project, which strengthens the city centre through its retail, leisure and residential development, but also integrates with the existing fabric of the city.”

Inevitably valuations are going to be under intense scrutiny in the coming 12 months, as will the long-term relationships between those valuing properties and their owners. Yet the industry may be best served not by simply pricing downwards but re-examining the entire valuation process.

“There’s too much negativity about the performance of certain retailers, which is drilling down across the sector,” says Duxbury. “There are plenty of retailers and destinations performing really strongly and retail is always going to be part of our portfolio. “Yes there is a perfect storm at the moment, but the right asset in the right location will provide good returns in the long run.”