Retail US: Shrink space, not returns

There are still investment opportunities in retail, but large parts of the market are challenged, or will simply disappear. Christopher O’Dea reports

Despite a seemingly endless supply of bad news about mass store closures and troubled loans, investors see plenty of potential in retail property. Others are steering clear of a sector that is being disrupted by technology and changing shopping habits.

Online commerce is challenging parts of the retail market, but people still need to buy groceries. Studies show that many consumers prefer online retailers that offer the ability to pick up and return merchandise at physical stores. The National Retail Federation says, of the 154m US consumers who went shopping last Thanksgiving weekend, the proportion that went to physical stores were similar to the proportion that shopped online.

In fact, total retail sales in the US are increasing alongside the growth of e-commerce, indicating that digital selling is not simply taking market share away from brick-and-mortar stores, but fuelling a transformation in how retailers use physical space. Retail property is no longer just a place to store and display goods – the goods have become supporting players in an overall experience that encompasses dining, entertainment, as well as the opportunity to buy merchandise.

This is changing the dynamics of the market. Instead of being an afterthought in office or multifamily lobbies, retail space is becoming a key element of the live-work-play value proposition underlying most new urban projects. In markets with high growth potential, street-front retail has become an attractive value-added strategy for institutional investment.

In the mall sector, repositioning is not confined to suburban properties that are losing big-box department store anchors. Enclosed urban malls that sprang up in the 1970s and 1980s are being torn down to bring back smaller-scale, open-air street grids. Pedestrian zones and access to mass transit are replacing concrete parking structures to cater for Millennial consumer preferences and a new generation of smaller, more conveniently located retail space.

And even parts of the market assumed to be immune to the effects of the internet could be facing disruption. In March, Amazon asked several food producers how they could deliver cereal and other food staples via its delivery network – bypassing physical grocery stores entirely. Could Amazon, which previously disrupted the US bookstore business, upset grocery-anchored retail centres?

Investors are reacting differently to these shifts, some looking to spot opportunities, others preferring to avoid an uncertain sector altogether. According to Cushman & Wakefield, 19% of the $435bn (€401bn) in capital available for global property is targeting retail. But the CBRE’s 2017 Global Investor Intentions Survey found that only 12% of investors were targeting retail property, down from 21% in 2016. 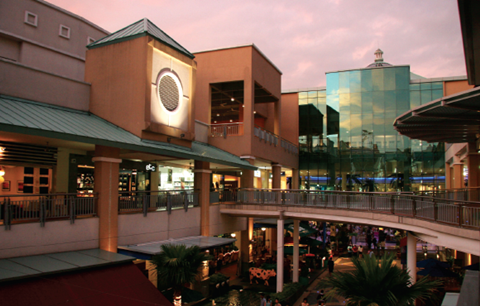 The skittishness appears to be a response to news about closing department stores. Despite increasing negative talk about retail property, the softness in the market has been concentrated in class-B and class-C retail power centres (or retail parks), according to the CBRE North America Cap Rate Survey for the second half of 2016. Cap rates in class-A retail were stable. “The retail sector had a fundamentally good year in 2016 with rising rents and occupancy and this is expected to continue in 2017,” CBRE says.

US institutional investors appear to be committing capital to retail strategies, despite the bearishness from global investors. A variety of pension funds, insurance companies and endowments committed $500m to the first fund of start-up company Asana Partners, targeting neighbourhood retail property in high-growth markets across the eastern and southern US. Starwood Capital Group is planning a $1bn core-plus fund focused solely on retail property, a unique proposition in a market where multi-sector investment briefs are the norm. While Starwood is associated with higher-risk value-added and opportunistic real estate strategies, the company also owns Starwood Retail Partners, a shopping centre asset management platform with $6.5bn in retail assets.

In many cases, US investors are looking to increase their exposure from a low base. A $75m commitment from the New Mexico State Investment Council was the final capital pledge to the Asana fund, and allowed the investor to increase its exposure to the sector. Vince Smith, deputy investment officer for the council, which manages the state’s $19bn endowment fund, said at the time: “We were a little bit light with retail assets prior to this commitment.”

Los Angeles City Employees’ Retirement System (LACERS) also invested in the fund, enabling it to increase its exposure to retail. According to board meeting notes prepared by its consultant The Townsend Group, the LACERS portfolio was “significantly underweight to the retail sector compared to its benchmark”. The investment with Asana is projected to lead to the pension fund being overweight retail by the end of 2018. According to Townsend, the “potential risk associated with this sector overweight is limited, due to Asana’s focused strategy that differs from and complements other retail holdings”, such as Gerrity Group, which invests in necessity-based retail on the West Coast.

Asana aims to address the digital threat by targeting mixed-use, multi-tenant retail buildings and retail condominium interests in 11 high-growth, dense urban locations in eastern US “that are less sensitive to the economic impact of e-commerce, [such as] restaurants, gyms, and grocery stores”, says LACERS.

While avoiding the effects of e-commerce, Asana will seek to capitalise on other demographic, supply and industry factors shaping the retail sector. Chief among these are demand for experiential retail destinations geared to Generation X and Millennial preferences for healthy lifestyles and low environmental impact, and the shift by retail tenants to meet those needs with new, often smaller stores in top-quality locations offering diverse merchandising, food and entertainment options in walkable proximity to each other. Asana says these trends create an “increasing ability of well-located retail to be anchored by non-grocer food, fitness, health, and experiential uses”, tenants that historically have not been seen as retail anchors.

At the same time, new construction is low – total US retail supply fell almost 10% in 2016 from 2015, CBRE says. And Asana’s presentation to LACERS contends that “new development in the fastest growing cities is hindered by the length and difficulty of entitlement processes, the availability and cost of land, and increasing construction costs”. The game plan for those conditions is “to redevelop existing urban neighbourhood retail”. It is an overlooked opportunity, Asana says: “Current ownership of this segment is fragmented, undercapitalised, and non-institutional.”

While the shortage of supply presents a value-add opportunity to redevelop urban neighbourhood retail property, the US mall segment remains in flux. A bright spot is urban malls that were enclosed during the 1970s and 1980s – many of those properties engulfed their surroundings during government-backed efforts to revive inner cities, replacing street-level storefronts with multi-floored buildings and parking garages.

The trend has reversed. “The gloomy, windowless downtown malls built in the 1970s with urban renewal funds to help downtowns compete with the suburbs do not have a good track record,” says Ellen Dunham-Jones, a professor of urban design at Georgia Institute of Technology. “I know of 20 downtown malls that have been adaptively re-used, 25 that have been demolished and redeveloped, and four that have been removed and turned into parks,” she says.

A park now occupies the site of the former Columbus Commons in Columbus, Ohio, for example. “Before it was demolished, one sees little new investment,” in the area, Dunham-Jones says. “Today it’s lined with new urban housing.”

The rest of the US mall sector presents a tale of two cities. The QIC US Shopping Center Fund, an open-ended vehicle, currently holds 12 properties in prime coastal markets in nine states in the US. According to Strotton, the US mall market appears appropriately priced, with class-A assets “valued at a level that is rationally different from class-B or C assets, and sellers recognise the true value of their properties”.

That value may prove insufficient to service or retire debt incurred by the many malls that do not fall into the top tier in terms of location demographics and sales per square foot, says Jan Rogers Kniffen, a retail industry consultant. While premium malls are located across the country, in urban rings or suburban areas, they share one feature: they generate sales of more than $600/sqft at interior store locations. Rent for this space can run $40/sqft or more, he adds. “Everybody who has brick-and-mortar stores will want to have one in one of those malls,” he says.

The bad news, Kniffen says, is that with 1,083 enclosed malls in the US, “one heck of a bunch don’t fall in the top category”. Many of those will need to be closed, repositioned or converted to other uses. The problem Kniffen sees is that “they’re all highly levered, because that’s the way malls are”, but rental revenue from new tenants such as community centres and doctor’s offices cannot generate enough revenue to cover debt service.

“I don’t believe malls or brick-and-mortar retail is dying,” he says. “We’ll have a strong brick-and-mortar presence going forward – we’ll just have a lot less of it.” From that vantage point, the tight supply of new retail space may be just right.