2
Retail UK: Lights out at the mall
Retail

Retail UK: Lights out at the mall

Shopping centres specialists have been investing heavily in a changing world. But the outlook for the sector still looks gloomy, writes Hemant Kotak

The rise of modern in-town shopping centres in the UK first gained traction in the 1960s with schemes such as the Bull Ring in Birmingham (which was redeveloped in 2003), and out-of-town schemes in the 1970s such as Brent Cross in North London. The explosion of development since then is the direct result of a shift in shopping habits favouring shopping centres over traditional high streets, many of which have been displaced.

However, this trend in rental growth has slowed and may even be reversing, as physical retail sales growth and tenant densities have stalled for the better part of a decade. The change in fortune for physical retail was initially driven by a fall in disposable incomes resulting from the global financial crisis. But the deeper rooted – and more serious – issue is the disruption caused by growth in e-commerce.

In this regard, the UK leads the Western economies. Since 2000, UK online retail penetration has grown from almost nothing to over 16%, and while that growth is expected to slow, the shift continues. Improvements in technology and order fulfilment could push e-commerce to as much as 30% of retail sales by 2030.

By contrast, continental European countries average about half the UK e-commerce penetration. One could reasonably question why well-travelled, well-connected iGenerationers (also known as post-Millennials) living in Madrid or Paris would not converge to a similar level as their London counterparts – by implication, the pertinent question facing continental landlords is perhaps when, and not if, it will catch up. 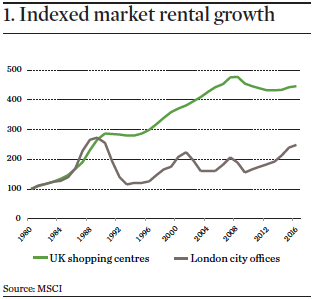 If Generation Xers took to consumerism in a way baby boomers could not, what then for Millennials and post-Millennials in Western economies? Should it be surprising that the marginal utility of packing already-brimming wardrobes with yet more T-shirts or jeans is diminishing? If what they value increasingly more is experiences of exotic holidays and leisure activities that they can use to out-post their friends on the latest social media craze, then Ikea’s chief of sustainability, Steve Howard, was right when he said the Western world has hit “peak stuff”. Next, a bellwether mid-market retailer in the UK, made similar inferences when CEO Lord Wolfson pointed out that Millennials are trending towards experiences and away from “things”.

What about the consumer’s ability to spend? The tea leaves do not offer much hope there either. Unsecured consumer credit is spiking far beyond levels seen in the last boom. This time student loans are the main culprit, as university tuition fees per annum climbed from £1,000 to £3,000 in 2006 and then to £9,000 in 2012.

To add fuel to an impending fire, household savings rates have plummeted to zero, and are now only marginally better than the negative levels immediately prior to the global financial crisis. Consumers are (unwisely) not using the low-interest-rate environment to save/pay-down debts – if low-to-middle earners are just getting by in this climate, imagine the predicament they will face when interest-rate hikes loom, as is currently the case in the US.

As a result of weaker sales growth, average share prices of large UK-listed retailers – those t hat are commonplace in shopping centres – have seen about half their market value wiped off since January 2016. 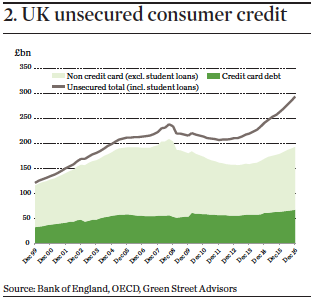 Over the same period, large online fashion retailers such as ASOS and Boohoo are up 50% on average. Remarkably, the £5bn (€5.9bn) market capitalisation of ASOS (founded in 2000) is now in the same ballpark as long-established household names both in the UK (Marks & Spencer and Next) and US (Ralph Lauren and Michael Kors).

Stock market investors have reacted to the writing on the wall. Simon Property Group – the largest and among the best-managed real estate investment trusts (REITs) in the world – is down some 25% since its peak in mid-2016 and now trades roughly at a 20% discount to gross property value. Meanwhile, retail-focused UK REITs Hammerson and Intu Properties have held up remarkably well and trade at much more modest discounts (high single-digits) to gross property value.

In the UK, total occupancy cost ratios are 20% compared with the mid-teens for US standard shop tenants (by Green Street estimates), and there are mounting pressures on gross margin from higher property taxes, multi-year inflation-busting increases in the national living wage, and imported inflation due to a weaker pound.

Amid the challenges facing UK shopping centres, one important silver lining is the high average quality of UK REIT portfolios. The ‘physical’ pie is shrinking, but REITs are investing heavily in their centres, and are increasingly tilting their offerings towards the e-commerce-resistant leisure component of shopping trips. REIT executives who acknowledge – and embrace – the inevitable seismic shifts, will be best placed to drive shareholder value in the long term.