As changes in consumer behaviour polarise retail locations into winners and losers, investors need a granular approach to identify investment opportunities and to understand prospects for rents and property values, particularly when it comes to ‘squeezed-middle’ locations.

We have tackled this by developing a City Attractiveness model composed of 19 different indicators grouped into four main categories – city quality, population, economy and retail property market. These are weighted and then enriched with input from Redevco’s country teams to categorise locations into five baskets that rank cities from excellent to poor. This tool identifies some 200 European cities that we judge to be of investment-grade quality. As an investment manager specialised in retail real estate, it is an essential tool in benchmarking Redevco’s decision-making on investments and we share the findings in conversations with our investment partners and tenants.

The most recent assessment, of 811 cities and large towns across Europe, revealed that the performance gap between the ‘best’ and ‘the rest’ is widening. For the most successful urban shopping locations, the key differentiators are ‘soft’ qualitative factors, such as tourist attractions and a strong proportion of creative professionals in the population.

The research shows that there is a direct link between the number of points of interest offered by a city and the investment performance of assets in these locations. The more attractions a city has, the better the rental growth prospects and potential increase in property values. The biggest cities such as Berlin, London and Paris stand out because they have the broadest number of points of interest and a substantially higher proportion of inhabitants employed in creative industries. Paris, for instance, has 3.5 times the average city’s share of creative employment in its workforce, as well as more than 1,000 attractions.

Cities with a broad international visitor appeal perform well, particularly as the flow of tourists is growing. The World Tourism Organisation predicts that international tourist arrivals will rise by an average of 3.3% a year from 2010 to 2030. Amsterdam is a good examplar of the benefits. Tourism accounted for more than 9% of the city’s gross domestic product in 2014, whereas a decade earlier the contribution was 5.9%. Last year the number of visitors rose 12%, boosting retail sales. It is no coincidence that this stabilised prime retail rents in Amsterdam, while they edged lower elsewhere in the Netherlands.

The horrific terrorist attacks in Paris in November 2015 highlighted how an over-reliance on tourism – as with a dependence on any single industry or employer – can also be a source of vulnerability. In a city that is one of the world’s top tourist destinations, international visitors in Paris dropped after the attacks, and department stores Printemps and Galeries-Lafayette reported significantly weaker sales.

We can learn a lot about the changing trends in shopping by examining how successful retail chains are expanding. They are opening stores in cities ranked highest in our City Attractiveness research and closing down shops in the less attractive cities. Retailers can cover a market as effectively as before with fewer stores and an online platform supported by an efficient logistics operation. Stores are vital for a brand’s visibility, acting as a flagship to showcase goods and to offer a pleasurable shopping experience to customers, as well as providing returns and click-and-collect services.

We surveyed 25 international retail chains and found that, in the 12 months to the end of the first-half of 2015, they cut the total number of outlets across Europe by 5% to 8,147. This makes 519 store openings, 85% of which were in shopping destinations rated ‘excellent’ or ‘very good’ under Redevco’s City Attractiveness ranking. The remaining openings were mainly in secondary cities in the UK and Germany, where economic growth prospects are better than elsewhere in Europe. The 11% increase in store closures by the retailers was concentrated in lower-rated cities. 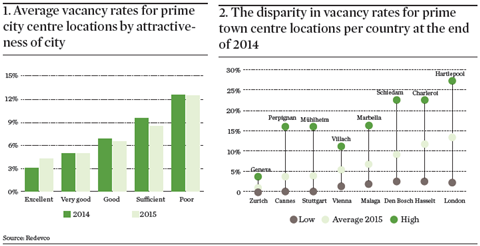 Clearly, retail’s changing landscape makes it imperative for real estate investors to anticipate where brands and shoppers will want to go and to target assets in higher-ranking locations.

Average vacancy rates for the 811 cities that we examined rose to 8.3% this year from 8% in 2014. This belies the performance of cities with an ‘excellent’ City Attractiveness ranking, where occupancy is rising, and those rated as ‘poor’, where vacancy is rising.

Retailers are targeting the biggest cities because they have the fastest population growth. The United Nations estimates that 2007 was when the number of people living in urban areas exceeded the world’s rural population for the first time.

Since passing that tipping point, the urbanisation trend is continuing in Europe. The UN projects that 82% of Europe’s population will be urban dwellers by 2050, compared with 73% in 2014 and 70% in 1990. These demographic shifts will have profound consequences for real estate.

More than one quarter of the cities that we assessed face declining populations, with a majority of these located in Spain, eastern Germany and eastern Turkey.

Spain is an interesting case because it highlights that population decline is not necessarily a problem for a city’s appeal to retailers, provided there is a strong counterbalance. The country’s high structural unemployment rate has caused a brain drain, birth rates are low and the number of retirees is rising; yet Madrid and Barcelona are among Europe’s 14 most attractive retail destinations in our City Attractiveness ranking. Labour market reforms, low interest rates and energy prices, plus a weaker euro are delivering better-than-expected growth in the Spanish economy, lifting confidence. The country’s appeal as a tourist destination is also a powerful counterweight to the negative city demographics, with Madrid and Barcelona outperforming national averages in this domain.

Better prospects for employment, income, education, living standards and a richer cultural offering nevertheless lie behind the urbanisation trend. Europe’s largest cities will also function as a gateway to the thousands of immigrants who are fleeing conflict zones, mainly in Africa and the Middle East. European cities are very often the first point of contact for migrants and studies show that urban locations are where most who qualify to stay will settle.

Immigration has important consequences for German cities, for example, and may offset the country’s falling birth rate and ageing population. The European Commission estimates that people aged over 80 will constitute more than one third of Germany’s population by 2040. The population shrank in 2014 by 150,000, even as it welcomed 550,000 immigrants. With the numbers arriving in Germany set to be even higher in 2015, immigration means that population growth may be even faster than projected in certain cities.

Dig deeper into this urbanisation trend and another theme emerges: how city centres have reinvented themselves as attractive places in which to live. If we characterise the 1980s and 1990s as the rise of the suburbs and out-of-town retail, then the 2000s-onwards were when city centres put themselves back in business, reviving the fortunes of high streets. Regeneration, crime reduction and other steps to improve city centres, often steered by the public authorities, have increased the appeal of inner-city living and driven gentrification.

City centres are attracting single-person households, particularly among Millennials, who want to live, work and enjoy their leisure time closer to city-centre amenities, particularly in or close to affordable, fashionable and gentrifying areas.

Age demographics are important for retailers since older people tend to spend less money when they shop and the declining number of people in work is a brake on economic growth. This is supported by our research, which shows that less than 1% of the European cities with an above-average-age population enjoyed higher per capita retail sales. These exceptions are Ostend in Belgium, Cannes in France, and Bologna and Milan in Italy. As highlighted earlier, cities with more elderly populations are mainly located in Spain and eastern Germany.

Prospects are patchy across Europe as the economy recovers and reduces unemployment.  Cities with a high proportion of knowledge-based employment, such as Guildford, Valencia and Stockholm, enjoy the best prospects for retail sales growth because their inhabitants have higher disposable incomes. Urban locations dominated by heavy industry or manufacturing lag behind those with a higher exposure to IT, financial services and real estate. Dependence on a particular employer or industry focus also increases vulnerability to shocks. We will be monitoring with interest how the current challenges faced by German car manufacturers affect Stuttgart, a city whose population relies directly or indirectly on the health of the automotive industry.

The best-rated cities in our ranking are also attracting the most investment flows. The broader context is that retail properties are benefiting from the appeal of real estate as ultra low interest rates lead investors to look for higher-yielding, income-producing assets. The weight of money caused average net initial yields – the income generated by a property as a proportion of its net purchase price – to fall by 16bps in the first half of 2015 to below 5% in many cities. The most pronounced compression in net initial yields was for cities rated as ‘excellent’ under our City Attractiveness ranking, with a 56bps reduction. Cities rated as very good, good and sufficient recorded less pronounced yield compression, while it was negligible for those rated as ‘poor’.

We found the polarisation in pricing for prime retail locations is most pronounced in the UK. A prime retail unit on London’s Bond Street fetches 2% as a net initial yield, whereas it is 10% for the best retail pitch in Oldbury, a satellite town of Birmingham. It is surely no coincidence that Britain has Europe’s highest online retail sales by proportion.

City Attractiveness is critical for stock selection. As a specialist investor in retail-anchored real estate, we have narrowed our focus on those real estate assets best equipped to weather and prosper amid the disruption of the new age of retailing: principal shopping streets of the larger cities of western Europe, inner city shopping centres and dominant out-of-town retail parks. Our benchmarking tool allows us to identify those assets to be treated as non-strategic and to earmark them for disposal in the portfolio rationalisation programme that we have implemented in the past few years.

In June 2015, Redevco acquired a 1.3-acre site for redevelopment in the heart of Brighton, for more than £50m (€65m). The seaside town on England’s south coast is a very good retail destination under our City Attractiveness scoring because of its large student population, good catchment area and tourist attractions, such as the Pier and Royal Pavilion, which receive 8m visitors a year. It ranks alongside cities like Munster and Bordeaux, where in October 2015 Redevco also opened Promenade Sainte-Catherine, a €105m regeneration project.

Location risk for real estate investors has leapt up the agenda as e-commerce, among other factors, changes the retail landscape at an astonishing speed. Deploying capital in retail-anchored properties now requires a nuanced and granular view on shopping destinations that goes beyond traditional metrics such as retail sales, footfall, demographics and GDP.