International retailer expansion across Europe’s key retail markets has continued apace in the past two years, driven by a search for growth. London, Paris, Milan, Rome, Munich and Berlin, all cities with a global appeal, have successfully attracted new retail brands, despite recent headwinds that have plagued Europe’s economy. A significant pick-up in retailer expansion has also been observed in the regional cities of the UK, France, Germany and the Scandinavian markets, as retailers focus on mature stable markets with healthy fundamentals.

After entering Europe’s top-tier retail markets, retailers are selectively expanding deeper into mature markets and then into growth markets. Borders have become less of a barrier, but retailers have become more diligent when considering new opportunities: rewards are plentiful, but the risks associated with getting expansion wrong are sizeable.

Moscow and Istanbul have become Europe’s success stories, as no other city attracted as many new entrants as these two markets over the past two years. Despite the recent and pending impact of geo-political events, Moscow’s retail market has thrived from its sheer market size, rapidly rising levels of disposable incomes and fast growing shopping centre stock. Istanbul’s retail market is revolutionising at great speed, and has become Europe’s seventh most attractive location for international retailers. More significantly, an increasing number of retailers are considering Istanbul as the first point of entry to Europe, attracted by its modern shopping centre stock, landmark schemes and favourable demographics.

We have also witnessed a significant level of churn in Europe’s retail market in the last two years, as retailers ‘right-size’ their portfolios. As a general rule, for every two stores opened across Europe, one store has closed. Churn was particularly notable in Europe’s recovery and growth markets, where retail sales have suffered since 2009. But, despite challenging trading conditions, strong brands such as 7 for All Mankind, Cos and Michael Kors have continued their expansion across Europe. More recently, we have seen a significant uplift in demand from these retailers, and others, trying to take advantage of affordable prime retail space in recovering economies, including Dublin, Madrid and Milan.

Looking forward, Europe’s retail sales growth outlook is the brightest since the start of the decade and we anticipate international retail expansion will accelerate across the key European retail markets. Retailers with strong and translatable proposition will explore international expansion – whilst appreciating and mitigating the risks. 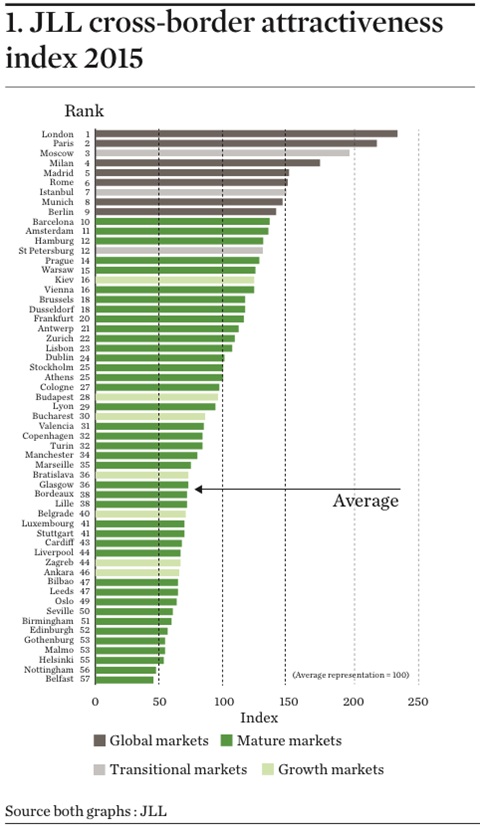 As the retail world continues to reshape, for many retailers the sales generated from the subject unit is rarely the sole objective.  A store may support a wider wholesale, franchise or online business or support wider brand awareness, but this will differ by retailer and retail location.

International retailers remain focussed on Europe’s best retail space. In particular, top-tier retailers have a strong appetite for flagship space in iconic locations. Lack of supply and high retailer demand have pushed up prime rents to record levels in markets such as Paris, Istanbul and London. In our view, upward rental pressure will remain so long as optimum supply of retail and leisure space remains constrained, which, for most developed European cities, will be the case.

There is a clear correlation between the number of international retailers present in a market and the prime rents paid by international retailers. International retailer appeal is driven by a multitude of macro level characteristics, including market size, consumer affluence, market maturity and transparency as well as micro level variables such as supply and footfall. The search for retail sales growth and the economic headwinds across much of Europe have led to a significant increase in new store openings by international retailers in the larger regional cities of the UK, France and Germany, all core, stable markets. Demand for Italy and Spain in this context is picking up. 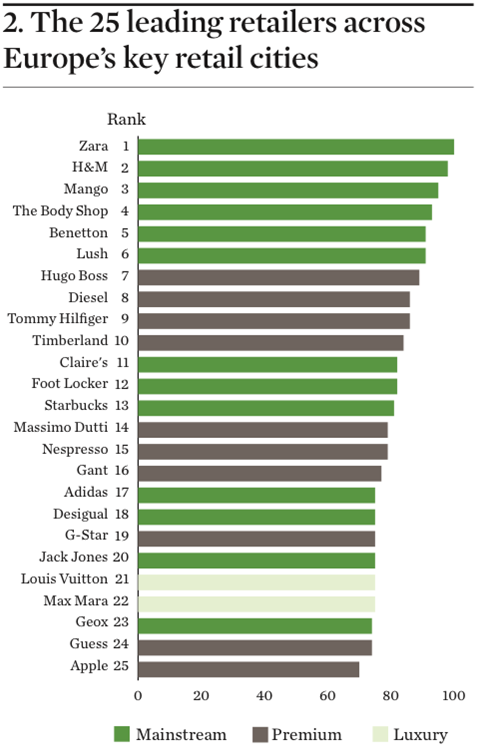 So what are the implications for the investment market? Retail investors, particularly those with a clear retail specialism and focus have been increasingly mirroring the decision-making process of the major retail groups since the economic downturn. Whilst investment decisions also require an analysis of the capital markets, liquidity and risk-return profile, there is no doubt that our industry is fundamentally driven by the willingness of retailers to pay rent for the ‘right space, right place’. As retailers are becoming more sophisticated at defining retail strategies this has downstream implications for investment decisions. Due diligence must now extend to the level of future-proofing of the physical environment to meet adapting store formats. Performance analysis needs to take into account the role of the store for each individual retailer and future rental growth needs to be considered in light of the current and future retailer expansion landscape.

As we enter a redefined era of low growth, pockets of rental progression will exist and most importantly can be manufactured. A comprehensive understanding of retailer expansion patterns and requirements coupled with the capability to adapt in this environment will ensure the right investment decisions are made.