The financing of social housing is a potentially effective liability-matching investment for UK pension funds. Rachel Fixsen reports on a nascent institutional market

At the end of January, more than 6,000 people protested at City Hall in London under the banner of “The March for Homes” to demand that Mayor of London Boris Johnson act to improve housing provision in the UK capital.

The need for social housing potentially provides investment opportunities for pension funds and other institutional investors. Islington Council said in December that it would invest £150m from its £1bn pension scheme to fund the building of new social housing, as well as to invest in infrastructure.

Much of the investment so far in the social housing sector – in the UK at least – has been on the debt rather than the equity side. In September 2013, UK buyout provider Pension Insurance Corporation (PIC) backed a £70m social housing project near Manchester by buying all bonds issued by a social housing private finance initiative (PFI) launched by Salford City Council.

Research conducted by the Cambridge Centre for Housing Planning and Research for the Investment Property Forum (IPF), found that UK institutional investors had very little equity ownership of social housing, with only £400m of equity investment having been made in the sector.

It said that shared-ownership housing and intermediate rental housing was better suited to equity investment than core social housing.

In Denmark, recent legislation has been passed requiring all parties buying land to set aside 25% of it to build social housing. So far, Peter Mering, head of real estate at Danica Pension has seen no negative impact on real estate investment as a result of the new law, although he believes such a consequence may yet come about.

There are some areas of Copenhagen where it makes more sense to earmark a quarter of the space for social housing. “The social housing in some areas has the potential to stand out,” Mering says.

Although the new law means more land will be available for social housing, Mering explains that investment opportunities arising out of this for pension funds and other institutional investors will be limited. “It is all handled by social housing companies that have access to state-guaranteed loans and municipal loans, so we could never compete with those companies,” he says.

The subsidies they receive mean these organisations can always be very competitive on price, charging rent of at least a third less than private players could ask for. Even so, there may be opportunities for investors seeking to mix a proportion of social housing with their other residential buildings, Mering says.

Aside from the top end of the residential market, Mering believes there could be room for social housing to be built alongside mass-market residential units. “We would be interested in developing a relationship with a social housing organisation to see if there are developments where these units would fit in a way that could work out well.”

He ponders the idea of developments which include social housing units in the parts of a building that attract less demand from average private tenants. “It could be mixed from one level to another,” Mering suggests.

One of the negative factors surrounding social housing as an equity investment is that housing associations have been worried that less government support and lower rental increases would squeeze reserves and lead to a cautious approach to expansion. Furthermore, index-liked payments by housing associations to investors could become less affordable over time, the study found.

In the UK, social housing could be used by pension schemes to partially match their liabilities. As assets that can provide long-term, stable income, they could be used to generate inflation-linked income, along with the main real estate sectors of office, retail and industrial. 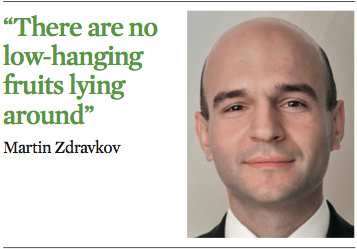 Douglas Crawshaw, senior investment consultant at Towers Watson in London, says his firm has considered using social housing as an investment for clients. But he cautions that the new welfare regime in the UK may have changed the rules of the game. “Investing in social housing provides, essentially, an inflation-linked income that is very secure, because it comes from registered providers and is effectively government backed,” he says.

However, as part of the wide-scale review of social security by central government, the new system of universal credit has been introduced. Whereas welfare recipients were previously granted housing benefit, which was made as a block payment to housing associations and other social housing providers, under the new regime of universal credit, individuals receive their payment with respect to housing directly.

“Consequently, the security of that income for social housing investment opportunities is less certain,” says Crawshaw. 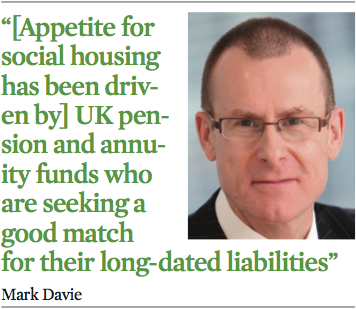 So far, universal credit is still in a trial phase and has only been rolled out in certain areas of the UK. There are concerns about what would happen if tenants of social housing enter into arrears. The minister for welfare reform, Lord Freud, has reassured housing providers that once arrears reach the equivalent of two months’ rent, the government will move the benefit claimant to managed payments directly to the landlord.

That said, in the areas where universal credit has been piloted so far, there does not appear to have been a material increase in arrears, Crawshaw says. But he concedes that available data is not yet extensive. “We are monitoring the situation and we are keen to pursue investment in this area,” he says.

Although there are some investment funds offering exposure to social housing, these are not widespread. This is partly due to the reticence of institutional investors because of the as-yet-unknown effects on the risk level following the introduction of universal credit, Crawshaw says.

Aviva Investors puts money into social housing via one of its REaLM funds — a range of products which aim to provide low-risk, long-dated, inflation-linked income streams for UK pension schemes need.

The REaLM Social Housing Fund only invests within the UK, and the fund’s manager, Martin Zdravkov, says the sector is not a simple one to buy into. “Good opportunities need hard work in terms of structuring and execution,” he says. “There are no low-hanging fruits lying around.”

But for pension funds with defined benefit payments to make, it is worth the effort because with index-linked Gilt yields at all-time lows, they need these and other assets. “In the UK, it offers long-date, either nominal or index-linked cash flows which are attractive to pension funds from a liability-matching perspective,” Zdravkov says.

Two major characteristics of social housing can be seen as either advantages or disadvantages for real estate investors, Zdravkov notes. They are the strong regulatory oversight of the market, and the inherently conservative owners and operators of social housing, he says. “These are pros because they mean less volatile, long-term cash flows from investments, and are cons because they mean transactions require time and perseverance to get completed,” he says.

One potential attraction of social housing as an investment is its potential to be a socially responsible investment (SRI). While Zdravkov agrees social housing offers a compelling SRI story, he stresses that it is the sector’s underlying characteristics that determine its attractiveness.

Crawshaw also says this point should not be overplayed. “SRI is one of the criteria we look at when assessing opportunities, but it is only one aspect of any investment proposition, albeit an important one,” he says.

Mark Davie, head of social housing at M&G Investments, has witnessed an increasing appetite from institutional investors for social housing and says there is a strong argument in favour of investment in the sector within the UK.

“This has been driven to a large extent by demand from UK pension and annuity funds who are seeking a good match for their long-dated liabilities,” he says.

The housing associations providing social housing generally need long-term debt to fund the construction of new homes and, as providers of this financing, pension funds like the fact that this is a secured, regulated market with a long-term income stream, Davie says. “Roughly two thirds of social rents are underpinned by the state through the welfare system,” he says.

To date, there have been no commercial losses suffered in the investment sector, he says, and demand for affordable housing exceeds supply by some margin. “So it’s easy to see why long-term institutional investors find this an attractive asset class,” Davie says.

“It’s a sector that requires specialist knowledge, which means it can be resource-intensive and requires deep expertise as there are many different lending structures available to housing associations.”