Residential UK: What goes up...

The growth of the UK PRS has been about income generation. But, asks Russell Handy, should investors be worried about capital values?

The offer of sweeteners to buyers of luxury London apartments raised eyebrows recently. Free iPads, electric cars and stamp duty subsidies of as much as £150,000 (€170,614) suggested an end to the boom.

The rate at which prime central London prices are falling is slowing, according to JLL. The first price growth since the end of 2014 was recorded in the first quarter of 2017.

Nevertheless, the necessity by developers to entice buyers reflects the wider apprehension surrounding the UK. Prices fell around this year’s triggering of Article 50 – the formal notification of the UK’s departure of the European Union. The subsequent general election in June is unlikely to have helped either.

London recorded the lowest rate of annual house price inflation for five years, according to Hometrack’s UK cities house price index in May. The contrast in house price growth in London between now and 12 months ago is stark, falling from 13% to just 3.5%.

The expensive cities of southern England, such as Bristol, Cambridge, Oxford and London, have all seen the rate of house price growth slow from double to single digits.

Hometrack’s report says the deceleration reflects weaker demand from homeowners and investors in the face of affordability constraints, as well as tax changes and falling market sentiment. An increase in stamp duty last year dissuaded buyers before the country’s notice of departure from the EU was confirmed.

Research firm LonRes has found that foreign billionaires are renting rather than buying in London following increases in tax bills. Lettings that cost more than £3,000 a week – £156,000 a year – increased by 28% in the final quarter of 2016.

Softening demand for property comes at a time of rising inflation, with which rental levels correlate. 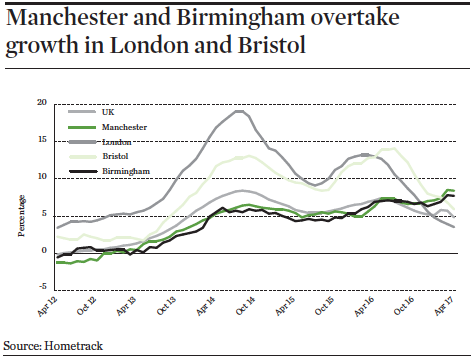 Recently, IPE Real Estate has been covering the rise of the private-rented sector (PRS) as an asset class. The story was invariably about how to create enough scale to make it viable. Many have since built up portfolios, often through constructing new assets.

The focus has been on income generation, since this is what attracts investors. But it is impossible to ignore what is happening to capital values.

The question of a potential house price crash – or ‘wobble’ as many prefer – has arisen. For institutional PRS investors, it is unfamiliar territory.

“We have yet to see a downturn in the cycle of institutions investing in the residential market,” says Alex Greaves, head of residential at M&G Real Estate, which entered PRS in 2013. “Real estate markets have been cyclical; we do have this extreme boom, bust cycles. It has happened and is likely to happen again in the future.”

With London’s skyline dominated by cranes – from Battersea in the west as far as the Docklands beyond Canary Wharf and Greenwich Peninsula – a downturn in the buying market raises the prospect of homebuilders releasing assets into the rental sector.

Barratt Homes this year sold 172 flats at various developments in London as rentals to be managed by Greystar. The housebuilder sold the units for £140.5m to Henderson Park – the latter’s PRS debut.

The private-rented sector (PRS) is the fastest growing housing tenure in the UK, experiencing 166% growth between 1991 and 2014, according to CBRE. The sector now has over 150,000 household entrants annually.

CBRE estimates that 35% of these are between the ages of 25 and 35. Older age groups are more prevalent, with almost 40% of the sector accounted for by those between 35 and 54.

“As the market evolves and demand increases from both investors and households, we anticipate that this sector will become an established and highly reputable route for landowners, as it has become in more mature markets, such as the US and in Germany,” says Peter Burns, executive director at CBRE in the UK.

Such arrangements are not unheard of, with M&G Real Estate having worked with Crest Nicholson, acquiring a portfolio of private-rented units from Berkeley Homes in 2013.

Lendlease, a build-to-sell developer, is looking for an investor for its £1bn build-to-rent platform. The Sydney-based group is offering its UK and US schemes to investors.

The moves all go to prove that the two types of tenure can co-exist.

Hayley Scott, responsible for real estate origination and structuring at Investec’s Structured Property Finance, which has funded residential developments, and sees merit in a range of tenures meeting within a scheme.

Andrew Stanford, head of residential at LaSalle Investment Management, agrees that there has been significant construction of apartments in London. “In some respects, yes too much product has been built,” he says.

Offering a rental product that stands out matters, he says. “Creating a scheme that looks different to the rest of developments going up is essential,” he says. “That should stand the building in good stead.”

Greaves says the style, quality of service and management of the product is “essential”. He says: “This is institutionally funded and owned, versus the buy-to-let market.”

For investors in the UK’s institutional PRS, there are, it seems, only positives to be drawn from a lack of supply, regardless of price fluctuations. Greaves points out that during a downturn, residential “tends to dip less, and recover easier than commercial property”.

John German, senior director of residential investments at Invesco Real Estate, says: “A rise or fall of capital values of flats and houses for sale doesn’t necessarily translate into a rise or fall for a rental product. PRS behaves more like student halls or offices.”

German says Invesco is focused on how the “direct rental market” will react. “When you look at Office of National Statistics data from 2006 to 2016, the only year when there was negative rental growth was 2010,” he says. “Rents fell less than 1%, even through the worst financial crisis and in the following year, bounced back quickly.”

What should concern investors in PRS strategies is a fall in the average monthly rent, which has dropped from £1,297 in March last year to £1,203 in March 2017, according to Your Move’s buy-to-let index.

According to Homelet, rents in London fell by 1.2% in April this year, compared with a year ago – the first fall since December 2009. The average UK rental value in April was £904 per month – or 0.4% higher than the same period last year, while rental price inflation is now at its lowest since February 2010.

The southeast region has seen a reduction in average rents since last year, HomeLet finds.

“I sense there’s a cooling off, not leading to dramatic rent falls,” says Stanford. “We’re not seeing rents dropping significantly.” Stanford says rents for two-bedroom apartments are “coming in slightly”, while one bedrooms are “quite stable”.

In 2021, annual rental growth is estimated to be around 4% in central London and 4.5% in greater London, according to JLL. The outlook is similar for the rest of the UK.

In Salford, Legal & General and PPGM’s first build-to-rent scheme opened in June. An initial 90 flats in the 225-unit site are being let.

Mathieu Elshout, senior director private real estate at PGGM, said the scheme is part of the Dutch pension fund asset manager’s strategy with L&G to invest “in strong urban regeneration locations, where we can build sustainable schemes that will have a positive impact on the built environment over the long term”.

The scheme is closer to a serviced apartment model. Tenancies range from six months to five years.

Dan Batterton, fund manager at LGIM Real Assets for build-to-rent, said:  “We have been able to offer significantly reduced living costs because of economies of scale, which a private landlord just wouldn’t be able to do.”

For Invesco, its 119-unit Gatefold scheme is located in an area that the manager expects to perform well.

“The greater London residential market remains one of the most important real estate markets in the world for occupiers and investors, creating long-term demand and liquidity for high-quality products,” says John German, senior director of residential investments at Invesco Real Estate. “We expect investments in this market to outperform the mainstream UK residential market.”

Also in greater London, Invesco is forward funding an outer London residential scheme. East Tower, in Sutton, will include 180 units and be completed by July 2018. 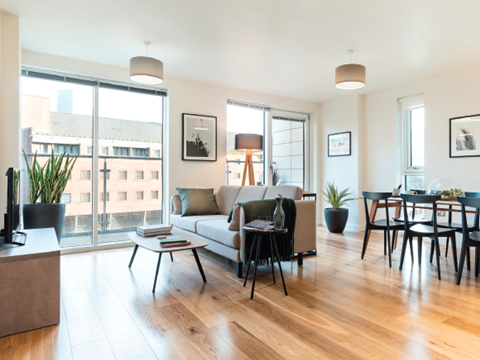