The multi-family outlook is strong despite new supply in the pipeline. Christopher O’Dea reports on a sector supported by shifts in living patterns.

It has been a banner year for US REITs, with the asset class up more than 15% year to date compared with just over 5% for the S&P 500. A major driver of those returns has been investors’ demand for the high dividend payouts that are required by the REIT structure. Multi-family REITs are also benefitting from powerful secular and generational changes in American residential preferences and a shift away from single-family homes in favour of apartment living.

Despite the strong run, REITs overall remain fairly valued, according Principal Global Real Estate Investors. Principal tracks the spread between the implied internal rates of return of global real estate stocks and global bond yields. The comparison at the end of the first quarter showed that the current spread is virtually the same as it has been for the past 10 years.

Returns were highest in the multi-family sector, Principal says. “Investors were both pleased by the 2014 outlook provided by management teams that helped ease concern regarding the impact of rising supply, as well as attracted to the group’s discounted valuation.”

Multi-family REITs showed a discount to NAV of just over 5% at the end June, according to SNL Financial, with only regional malls and specialty retail showing greater discounts.

Apartment living is catching on in America. “We view it as a secular shift,” says Steven Marks, head of US REITs for Fitch Ratings. “Folks are becoming more comfortable with renting. People coming out of school have a lot more debt, and it’s going to be harder for young people to get a mortgage.”

In addition, “people are getting married later, and having children later, and that’s going to push demand for single family homes out into the future”. The good news for multi-family REITS, says Marks, is that “people are going to be renters for a longer period of time – either by choice or by necessity”.

The outlook for US multi-family REITs is sufficiently strong that Moody’s upgraded the sector during the first half, citing improving fundamentals and cash flows in multi-family property, and a low level of new supply. In fact, despite some new development by REITs, Moody’s says the market will absorb upcoming apartment completions without adverse impact on rents because of the sharp cutbacks in multi-family construction as the economy slowed.

“Multi-family completions dropped off at severe rates during the recession,” says Chris Wimmer, Moody’s vice-president and senior credit officer. “What little new supply there is has been absorbed by increasing demand as the economy picks up.”

Real estate consultancy PPR says deliveries of the long-anticipated supply began to accelerate during the second half of 2013 and are expected to peak in 2014, then continue at a historically high rate through 2016. PPR estimates that 169,000 units were delivered in 2013 and an additional 256,750 are expected to be delivered in 2014 and 225,000 in 2015. This compares with 171,000 units delivered in 2010, 2011 and 2012 combined. Fitch notes that projections of supply moderating into 2016 might prove to be optimistic, as they are typically based on permit filings and, given the shorter development time frame for multi-family, could increase. For example, PPR’s 2014 estimate has been revised higher by 28,000 units since the 2014 outlook in spring.

As long as capital sources remain plentiful and asking rents/market occupancies remain stable, Fitch envisions developers continuing to start projects. “The one place where we’ve seen the most development over the past two years – and we expect it to be the case over the next 18 months – is in the multi-family sector,” says Marks. “It’s the build-versus-buy corporate decision, and where cap rates are and where people expect them to be, it’s very challenging to acquire assets and get good returns, so companies have been developing in markets where they think there’s still strong demand.”

Cap rates in multi-family have been in the 5-6% range, says Marks. “Certainly you can see cap rates in the 4% area in markets like New York and certainly San Francisco. As a result, REITs are developing instead of buying.

Essex Property Trust, for example, “has a sizeable development pipeline in New York,” says Marks. “Equity Residential and Avalon Bay also have meaningful development pipelines there. The fundamentals where companies are developing support it, if you look at where rents and occupancy levels are, and compare that with the very low single-family affordability in places like Boston and New York. You can make a good case that renter demand is going to remain very deep.” 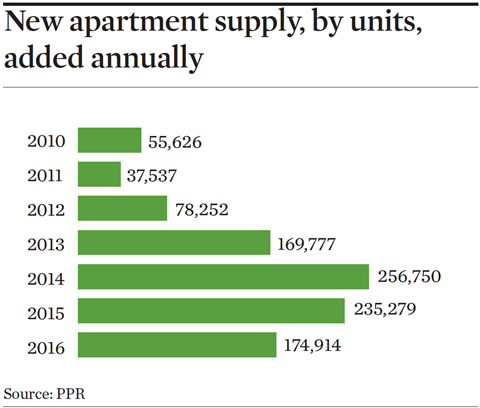 An illustrative case is Houston-based Camden Property Trust. It targets Sunbelt and mid-Atlantic markets with features such as economic growth that lead to household formation and job growth, an attractive quality of life, and/or high single-family home prices making the company’s apartments an economical housing choice.

Camden, for example, expects SSNOI (same store net operating income) to remain above the long-term trend for next several years, driven by strong demand from a growing ‘echo boom’ population with high propensity to rent – more than 60% prefer renting – with a large share of jobs going to the 20-34 age cohort. With 1.4m young adults more than usual living with parents, Camden expects pent-up demand for apartments as those young people move out.

Camden’s portfolio shows that move out rates from apartment residents purchasing homes have declined dramatically from a peak of 23% a few years ago to just 14% in Q1 2014. The trend reflects not only a steadily declining homeownership rate in the US, but negative sentiment toward home ownership. “New [apartment] supply may not be sufficient to meet demand,” Camden says.

In late June, Fitch revised its outlook on Camden to positive from stable. Citing proven access to capital, a strong management team focused on credit, excellent unencumbered asset coverage, and low leverage. Camden’s SSNOI growth through the cycle has been “in line with other apartment REITs”. says Fitch, “a testament to strong asset quality despite lower barriers to new supply compared with more coastal-focused multi-family REITs”.

A credit concern is Camden’s development pipeline, as its cost-to-complete is the highest of the multi-family REITs, says Fitch. That “improves asset quality but adversely impacts corporate liquidity”. While noting the concern, Fitch says the company has consistently sold assets and/or issued equity to improve and maintain low leverage since 2009. In addition, Camden has the lowest leverage as a percentage of asset value among multi-family REITs – even when adjusting for a slightly above-average capitalisation rate used to value its portfolio.