4
Global residential sector: On its own path
Residential

Global residential sector: On its own path

Residential has behaved differently to commercial property across Europe and the US. Mark Weedon explores its unique characteristics and the implications for markets like the UK

Despite this relatively weak performance, residential is an important sector in a series of national markets, representing over 20% of the US and many large European markets, such as Germany, Netherlands and Switzerland. In these countries it has become an important element of institutional real estate portfolios, and the sector is starting to grow in a series of other countries, most notably the UK.

Residential has tended to behave differently to other forms of real estate because of the specific demand drivers and variations in investor appetite through market cycles, although there are important differences in the relationships across regions. This is demonstrated by comparing the performance of the residential and office sectors in the US and Europe.

There are clear periods during which residential has outperformed and underperformed office markets. In the US, residential significantly underperformed during the years leading up to the financial crisis, but then performed relatively well from 2010 as it was seen as a safe haven benefitting from the demand boost associated with the challenges in the single-family residential market.

The European residential market behaved differently, due to its relative stability through the crisis and the recovery. While European office values fell by 10.5% and 5.5% in 2009 and 2010, respectively, residential values fell by a far smaller 1.3% and 1.8% during those two years.

The contradictory movement of the US and European residential markets through their cycles reflect broader differences between the two markets. On the one hand, US multi-family has been the most volatile US property type over the past decade, while in Europe it has been the least volatile. On the other hand, European residential markets have tended to perform well relative to the broader real estate market, unlike in the US where it has tended to underperform.

Beyond the historical performance enhancing and risk-reduction benefits of the residential asset class, there has been significant asset management potential from individual residential assets. Recent research presented at the INREV annual conference demonstrated these benefits, which have two main dimensions.

First, as a sector, residential has tended to generate relatively low levels of capital expenditure compared with other property types. This is certainly the case for Germany, the UK and the US where the annual capital expenditure as a percentage of overall value on residential has been around half of that for offices. For the Netherlands, the cap ex spend has been broadly similar for the two sectors. 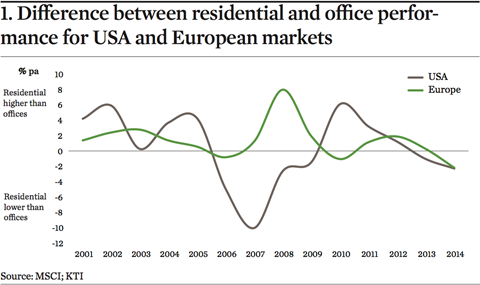 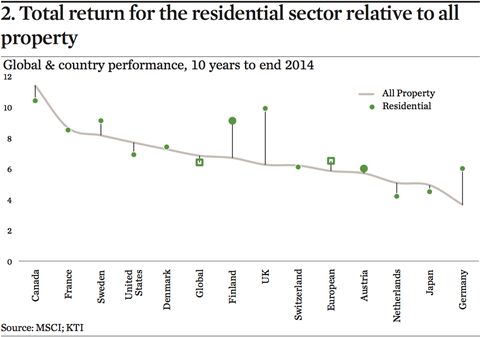 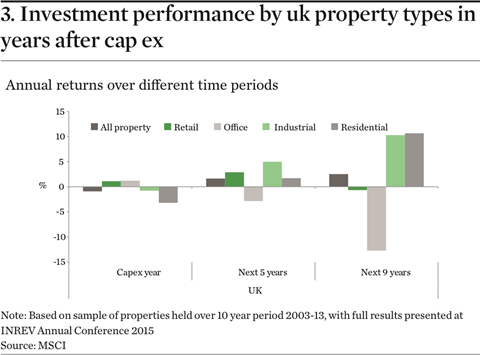 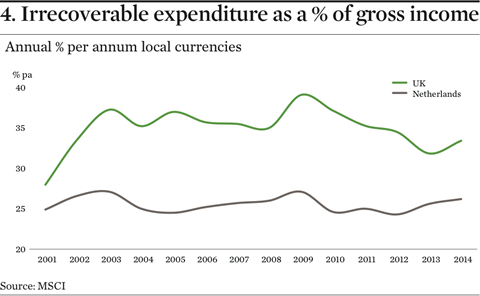 Second, evidence from the UK suggests that injecting capital into residential properties has had a more significant impact than it has one offices and retail, and – over the long term – in line with industrial.

Residential markets are undergoing structural change in a number of countries, no more so than the UK. Domestic and foreign institutional investors are now firmly focused on entering the UK residential market after decades of absence. A significant shortage in the supply of housing, particularly in London and parts of the South East has led to a period of sustained house price inflation. A series of large investment managers are moving into the sector, based on some of the characteristics outlined.

The emergence of large-scale landlords will introduce new levels of professionalism to the sector. An important dimension to this is the increased scale and resources that enable efficient management and aim to help keep operating costs low and thus the resulting income yield as high as possible.

The IPD UK Residential index shows that residential investors typically have lost between 30% and 40% of their annual gross income to operating costs and voids. A major reason for this is likely to be the composition of the sample that includes older stock and ‘pepper pot’ portfolios, both of which tend to be more costly to manage than large blocks of new apartments. Investors entering the market are taking lessons from the US multi-family model of residential block management seeking to boost net returns from their relatively low 2.5%-per-year levels, as measured by the IPD UK Residential Index.

The potential efficiency benefit of larger scale is demonstrated by comparing the ongoing costs of managing UK and Netherlands residential portfolios. The residential market in the Netherlands has been part of institutional portfolios for many years, and this has enabled the creation of scale, expertise and efficiency. In turn, this has helped drive down the costs of operating the residential assets, certainly compared with the UK market. It is too early to say whether the UK costs will fall to the levels of the Netherlands, but there is clear potential to more efficiently manage portfolios as they grow in scale.

Although residential underperformed as a component of the IPD Global Index during 2014, the sector still posted a global return of 8.5%. A major reason for its underperformance, certainly in Europe, related to its relative stability compared with the other property types. During periods of strong cyclical recovery in the overall real estate market, it is not surprising that the sector underperformed.

Beyond its attractive performance characteristics, the sector has benefited from other features, including relatively low requirements for capital expenditure, and the scope to add value through active management strategies. It is such characteristics that are contributing  to the emergence of a more institutional residential sector in other countries, such as the UK.