4
Offices: All work and all play
Urbanisation

Offices: All work and all play

Co-working is not just a new, niche sub-sector. Its rise is a reflection of a changing world of employment, writes Christopher O’Dea

“The nature of work is changing. Recruitment, retention, innovation, and productivity now require not just coffee, but also yoga, not just printers, but also art installations.”

The above is taken from the homepage of WeWork’s website.

The core appeal of co-working is simple: let us handle that for you – front-office reception, utilities, and all the chores related to maintaining office space – so you can focus on your business. The popularity of flexible office concepts in the past few years has made co-working companies a small, but rapidly growing, force in the office leasing markets.

Since its launch in 2010, WeWork has fuelled the acceleration of the co-working model in large part by redefining the environment in which we work. WeWork married refreshing design with creative community-engagement techniques and services to help companies focus on growth – services can range from staging thought-leadership panels to cheese tasting.

In many ways, it does not sound like work anymore, and that is the point. And the places where these activities occur do not look like traditional workspaces. Providers of co-working and flexible office space are remaking office environments to reflect new work styles, and in the process are bringing important changes to the office investment market.

Data on leasing leave no doubt that co-working companies are the new kid on the block in the office sector. Flexible-space providers accounted for 4.4% of square footage leased in major deals in the first half of 2018, according to CBRE Research, which tallied the 25 largest transactions by square footage each quarter for each of the 54 markets it tracks. That is nearly double the share of activity in the first half of 2017, CBRE Research says, and up from less than 1% in 2013.

Co-working firms account for an even larger share of new leases signed. In a major study of 87 markets, Cushman & Wakefield found that, in the first half of 2018, leases for co-working space accounted for over 10% of all new leasing deals in three of the six US gateway markets – Washington DC Metro (14%), San Francisco (10.8%) and Manhattan (10.5%). Published in August, the study used data from CoStar Group. 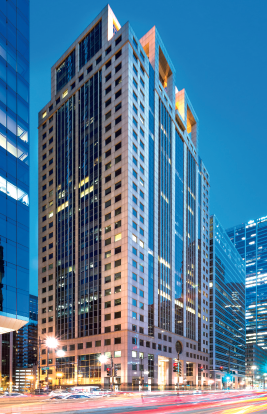 Although recent growth means co-working providers are rapidly increasing their share of current leasing activity, co-working space still accounts for a small part of the total office inventory by square foot in most markets. In fact, co-working space reaches 3% of the market in only one market, New York City, and accounts for only 1% of the total 5bn sqft of office inventory across the markets tracked by Cushman & Wakefield. Still, that is enough to make WeWork the second-largest occupier in New York City, according to Cushman & Wakefield, with its 11.6m sqft of space behind only the 5.2m sqft occupied by JP Morgan. In a September blog post, WeWork chief development officer Granit Gjonbalaj said its signing of a lease for 258,344sqft at 21 Penn Plaza, a building owned by TH Real Estate, made it the largest private occupier of space in Manhattan.

Co-working offers businesses a new way to meet their office space needs, and the model is catching on fast. Half of the co-working space in the US has opened since 2015, according to Cushman & Wakefield, with more than 5m sqft of new space coming on the market in each of the past three years – 3m sqft in the first half of 2018 alone. Growth is fastest in major markets such as the Big Apple. At present, according to Cushman & Wakefield, about half of US co-working inventory is in the six gateway markets: Manhattan, Los Angeles, San Francisco, Chicago, Washington DC Metro, and Boston. In New York City, there are 65 different flexible space companies operating 260-plus locations, according to CBRE. Since third-party flexible-space expansion in the city began to accelerate in 2013, the sector has averaged an annual growth rate of 22% there.

If similar rates of growth continue, CBRE expects that flexible-space providers’ share of major leasing will surpass the legal, government and insurance sectors during 2019. The trends that are driving the absorption of the flexible space concept, suggest the co-working sector is likely to attain that mark.

What started as a service for small tenants is proving attractive to larger companies, including many in the Fortune 500, which are exploring how flexible space can improve the performance of their property portfolios. Residential properties are also starting to add co-working space to give freelancers an office setting, as well as to accommodate employees who work from home; several innovative start-ups are adapting the co-working model to residential assets. While the strongest demand for co-working offices is likely to come from occupiers seeking central city locations, CBRE believes “there is mounting momentum for flexible-space providers to expand their footprint in Manhattan and beyond”.

The value of connections

The popularity of co-working space highlights a conceptual shift in how occupiers meet their space needs, and in turn, how investors factor the use of space in valuing office assets. And in an economy where robots and artificial intelligence are projected to replace dozens of jobs, co-working fulfils the underlying need for connection with other people.

“Real estate isn’t just space, it’s a bundle of benefits,” says Jacques Gordon, global head of research and strategy at LaSalle Investment Management. There are three main components to the benefits package. The first two, building or nearby amenities and building services are well-integrated into occupiers’ space planning and investors’ valuation thinking. “The third leg of it is community,” says Gordon. “The idea of community-building is still being tested, and it’s relatively new in terms of how you monetize it.”

While headlines about co-working focus on the flexibility that occupiers enjoy from signing leases shorter than the common five or 10-year tenures in the US, the appeal of the format rests on a more fundamental change in the workplace. “The concept is that not only are you consuming space and a bundle of services, but you’re interested in who else is around,” Gordon says. 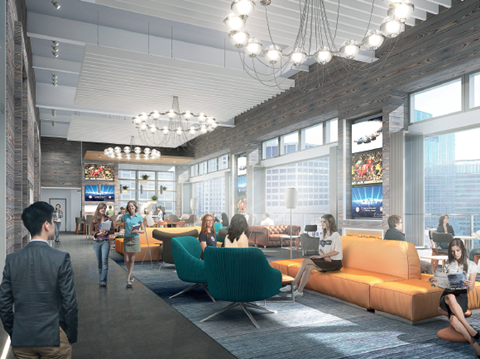 Rather than behaving in the way traditional commuters did, coming to an office to work and leaving at day’s end, “people are saying, I want to actually meet these people I’m hanging out with where I spend a lot of my time shopping or living or working”, Gordon says. Instead of watching the clock until quitting time, or sitting home alone in a small apartment, Gordon explains, “today people look around and ask ‘I’m seeing them every day in real space. Who are they? How do I meet them?’”

The desire for connecting with co-workers or co-residents reflects a deeper social trend. “Loneliness is one of the top mental health issues for America now,” says Gordon. According to a recent survey by Buffer, a company offering software for managing social media, loneliness is the number-one problem that professionals have with doing remote work. At the same time, remote working is on the rise, with nearly 70% of professionals globally working away from the office at least once a week, according to a 2018 report by co-working space company IWG. Nearly 80% of remote workers primarily work from home, prompting some multifamily asset owners to reconfigure areas such as lobbies or party rooms as co-working space. 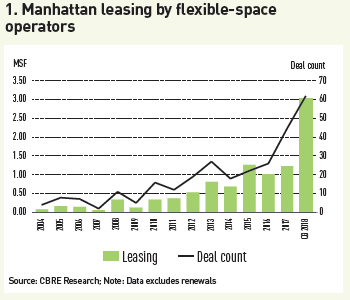 Houston-based WorkFlourish, which launched in 2016 with a single co-working space in a Houston apartment complex, plans to open 15 co-working spaces in residential and mixed-use buildings in the Houston, Austin and Dallas-Fort Worth markets by 2021, according to a company statement. The company expects to open the first of the new sites in the spring of 2019. Illustrating the point that connection is an important part of demand for co-working space, many of the members at the WorkFlourish site were not residents of the apartment building. The concept also boosted apartment leasing: WorkFlourish says 25 apartments were leased to co-working members or people who came to the site for meetings with members.

Assessing the effect of co-working space on the valuation of a building is more art than science. While there have been few transactions involving office buildings that have a significant co-working tenant, Cushman & Wakefield analysed 17 building sales with co-working tenants from the past two years. The data from those transactions “indicates a relationship between the reported cap rates and the proportion of a building’s square footage allocated to co-working”.

In those cases, where 40% or less of the building was leased as co-working, the cap rate was within range or below that of other comparable sales in the area. However, the gap between cap rates for sales of comparable buildings and those in the study expanded as the proportion of space allocated to co-working increased, suggesting that “investors seem to apply a discount as the percentage of the building that consists of co-working increases”. 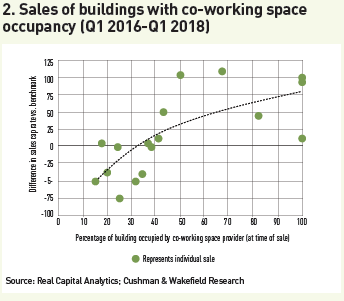 The market “seems to be comfortable with 15% to 30% of a building/asset being allocated to a co-working provider with relatively strong credit”, according to Cushman & Wakefield, while allocating more than 30% of an assets space to co-working “may currently be viewed adversely”. However, the report added, “we expect that the range of comfort will increase over time as investors and lenders have more experience trading assets with significant co-working occupancy”.

Institutional investment managers are adapting to the co-working trend. At 123 North Wacker Drive in Chicago, a property owned in LaSalle’s US value-add fund, for example, the investment manager has built a top-floor lounge area with glass doors that open to a rooftop deck and a state-of-the-art fitness centre.

LaSalle also offers prebuilt suites at 123 North Wacker, which fall between traditional office space that the occupier builds out and the totally-equipped space offered through short-term memberships by WeWork and other pure co-working operators. Prebuilt suites would generally be leased for three to five years, instead of the standard 10 years, as part of the strategy to increase the leased occupancy of a value-add asset.

CBRE has moved into the flexible office sector with the creation of a new division which will partner property owners to provide workspaces. The largest commercial real estate services firm by revenue said it has launched CBRE Hana.

The new subsidiary will partner with institutional property investors who want to enhance their assets by meeting the growing demand for flexible office space. Hana will design, build and operate the facilities and services.

Bob Sulentic, CBRE’s president and CEO, said: “The way space is being used is evolving rapidly. Companies want the flexibility to adjust their occupancy to meet changing business needs and a better workplace experience to attract and retain top talent.

“Hana is perfectly suited to meet these needs. Reflecting this, we have already generated significant interest from building owners who are looking for a trusted partner to help deliver flexible space offerings, and have a robust deal pipeline.”

The Hana team is led by Andrew Kupiec as CEO, who joined CBRE from Zipcar in 2017, and by Scott Marshall, as Hana’s president and chief development officer, who previously led CBRE’s investor leasing service line in the Americas.