With the continued growth of infrastructure mega-funds, is it inevitable that investors will overpay for assets and returns disappoint? Not necessarily, writes Christopher O’Dea

Despite concerns around pricing and markets being ‘late in the cycle’, fundraising for private infrastructure funds is booming. Macquarie, the largest investment manager in our ranking opposite, raised €12.3bn in 2018. Brookfield Asset Management and Global Infrastructure Partners (second and fourth, respectively) are known to be seeking to break their own records by raising close to $20bn (€17.7bn) each for their latest vehicles.

Evidently, there is an abundance of investors that believe both managers – and others – will be able to deploy such vast amounts of capital into the market, despite a finite pool of potential transactions in the market at any one point in time, and an increasingly competitive pool of buyers.

But it is not unreasonable to ask whether this latest fundraising episode could eventually lead to disappointment.

It has become increasingly difficult to find asset classes where an investor can put a significant amount of capital to work and expect to outperform risk-free rates by more than a narrow margin. In most traditional sectors, the return differential between high-grade and risky assets has narrowed, with most financial market indices at or near record highs. And yet the pressure for pension funds to post strong returns has never been higher.

The question of fund size has become particularly acute in the infrastructure sector. Institutional capital has been flowing into infrastructure funds at a brisk pace for a decade, resulting in annual surveys in which managers say their biggest issue is finding suitable transactions that can deliver return targets.

It might seem reasonable to assume that for managers of multi-billion mega-funds the problem is acute. But focusing on fund size alone, or making it a main concern, does not pay heed to the dynamic nature of markets – especially infrastructure.

Fund managers are steadily refining their investment propositions, developing differentiated strategies, and working harder to ensure transactions deliver target returns. Also, as they ratchet up allocations to the sector, institutional limited partners are learning more about the asset class and becoming savvier investors.

The message from conversations with investors, managers and consultants is that two major sets of considerations are emerging. The first pertains to proposed strategies and fund managers’ ability to implement them, and can be assessed through traditional due diligence and evaluation of investment teams and track records.

For large funds, some of the factors that are important to any infrastructure strategy take on added significance. One is the team – whether it has the necessary size, resources and expertise to negotiate, structure and manage the complex transactions that often take place at the upper end of the market, as well as the personnel with engineering, industrial operations and customer-service experience to run large-scale assets that often provide essential services.

A corollary consideration is whether the team has the sourcing network to find and execute on deals that can be completed in accordance with the stated strategy – the two often go hand in hand.

The second set of considerations concerns the investor. Before undertaking a manager search, each institution must specify what an infrastructure allocation is expected to contribute in terms of investment performance and the fund’s ability to meet its obligations, given the type of risk any given infrastructure allocation would have on the overall portfolio. In short, fretting about the asset size of a particular fund would be a fruitless exercise until the objectives for the investment are established.

“We hear all the time that people cannot find things to buy,” says Frédéric Blanc-Brude, director of EDHECinfra, which maintains a database of about 6,000 companies it considers to be private infrastructure, which operate assets like ports, airports and toll roads.

“There’s plenty of infrastructure the mega-funds could buy, but the difficulty is that these 6,000 companies are not up for sale all the time, and most of the time they are not.” In fact, an EDHECinfra study found that, on average, private infrastructure companies trade only once in a secondary-market transaction during a 25 to 35-year life.

Finding the right deals
The difficulty for fund managers is finding infrastructure assets to buy. Most managers pursue straightforward acquisitions of a company from an existing owner, “because it’s the easiest, and quite a few people are qualified to do that kind of deal”, Blanc-Brude says.

The most common structure in the sector is the special-purpose vehicle, which involves the long-term financing of an asset with a government or a customer for the asset’s service. Completing such complex, time-consuming transactions highlights the importance of a strong sourcing network. “Today there’s a shortage of people who can do that well,” says Blanc-Brude. He estimates that there could be 5,000 people in the world with the expertise in the investment, engineering and operational disciplines related to infrastructure. “The people who love this work are usually project finance bankers who trained as engineers, and there aren’t so many.”

A second supply bottleneck is that many infrastructure assets are on the balance sheets of construction companies that built them, industrial conglomerates that produced major components like turbines at the heart of power generation infrastructure, or in the hands of governments. “In general, these are not for sale,” Blanc-Brude says.

The lack of transactions – or illiquidity – is one of the attractions of infrastructure, and a source of return premium in exchange for tying up capital in an asset that cannot easily be sold. But that also makes the assets hard to price. “What is the right price?” Blanc-Brude asks. “That’s not obvious to determine. People are not necessarily always comfortable with how much risk they should be taking at a particular price.”

But some mega-fund managers have found a solution to the puzzle of price, risk and deal sourcing that enables capital deployment, and it is translating into repeat business.

“In 2018 we were quite surprised at how quickly some of the larger managers came back to the market to raise the next fund in their series,” says So Yeun Lim, global head of infrastructure research at Willis Towers Watson (WTW). 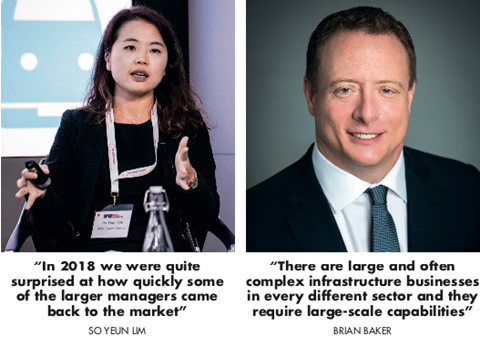 Despite having ample dry powder, many large managers “also transacted very fast”, Lim says. “So the main question we would have is about the quality of the transactions they’ve done.” Based on meetings with managers of funds that WTW monitors for clients, or for managers promoting a new fund, the conclusion was that managers “had not necessarily always overpaid for deals”, Lim says. “So I think it would be an over-generalisation to say that all managers, because they have a lot of dry powder, are losing their discipline.”

In fact, Lim adds, “some of the transactions were actually quite good, and managers were able to stick to the investment strategy”.

While some managers are increasing fund size with an eye on the future demand for infrastructure equity capital, she adds a note of caution. “I believe some of the larger managers have skilled teams and very good resourcing. But, going forward, I would argue that it would be difficult for them to find the low-hanging fruit.”

As a result, she says, “target returns for some of the managers are coming down slightly, compared with what they were two iterations ago, for the same type of risk”.

But investors need to compare the downward drift of infrastructure target returns to those of other asset classes to “determine the excess premium that we would require to advise clients to invest into these illiquid asset classes”, Lim says. The complexity of large infrastructure deals would also be considered. “Especially with managers that do more operationally intensive transactions, we would also underwrite the skill premium for the type of deals that they were doing.”

People are important for another reason – because infrastructure allocations are by nature long-term commitments to a strategy, it is important that clients are satisfied that an investment team can manage long-term relationships.

“Manager selection is critical in private markets because you are locking up money with a manager for a very long time – 10 years or potentially more,” says Judy Chambers, managing principal at Meketa Investment Group. “There has to be a high element of trust in terms of what you believe the manager can do, what their expertise is, and how they have produced in the past. There are marriages that don’t last that long.”

When building an infrastructure allocation, Chambers says, clients must specify their objectives before selecting managers of any size. While much of the due diligence on large and small managers is similar, large funds tend to display some unique characteristics. “Larger funds, based on the expertise of their investment professionals tend to focus on industries in which they have expertise, where they have strong relationships for finding transactions and a track record of generating value once they have acquired assets.”

That means industry operating experience is “extremely important”, Chambers says. During the 2008 financial crisis, infrastructure managers with strong teams of operating professionals fared better than those concentrating on financial engineering, and maintained the strategies originally stated.

“The name of this game is operating,” she says. Better managers have key operating people involved in all parts of the process, from identifying assets to purchase to determining efficiencies to generate value. “They don’t just hand over an asset to the operations person and say fix it. They are involved from day one.”

The bigger the better
Brookfield, which oversees one of the biggest pools of capital allocated to infrastructure, invests across the infrastructure sectors – utilities, renewables, energy, transportation, and data – looking to “acquire high-quality business on a value basis”.

Brian Baker, managing partner and CIO for transport and energy at Brookfield, says: “Infrastructure is big stuff to begin with – by nature, large-scale assets that might move a lot of commodities and cover a lot of distance. There are large and often complex infrastructure businesses in every different sector and they require large-scale capabilities and capital to acquire and operate.”

Raising more capital has allowed Brookfield to focus on larger transactions, which it says has become a key advantage. “It’s been a way we can differentiate our capital,” Baker says. “We can bring more financial certainty to a transaction than competitors that might need investing partners. Ultimately, we can generate more value over time, because there’s less competition on acquisitions.”

He adds: “Scale and deep knowledge of the over 30 countries in which we operate allow us to look at markets where we think assets might be overpriced, and shift our attention to situations where we might find better value. Since the credit crisis there have been pockets of volatility, and that allows us to look for the right timing to invest in a market.”

An approach that can work in different market environments is the ‘asset carve-out’, in which an infrastructure asset that is part of larger business is acquired and turned into a separate entity. It is an area in which Brookfield has had success and maintains a focus on.

“Carve-out transactions are complicated,” says Baker. “They require deep knowledge of the sector and you’re often working with your counterparty for a couple of years.” As a result, he adds, a carve-out “lends itself to a proprietary transaction for us where we are negotiating with one other party or a select few”.

He adds: “In a recent carve-out transaction, for example, there would be no immediate employee base in the business as we were separating it from its previous owner.”

“Fortunately, we’ve got deep operational capabilities inside our organisation to help us execute from a negotiation standpoint, and then build executive management teams, develop operating personnel, and IT systems, through the transition process.”

Baker continues: “We’ve done enough of these now that it gives us a blueprint. We’re able to position ourselves as a partner of choice for people looking to sell businesses.”

TOP 10 BREAKDOWNS
The 10 largest infrastructure managers by AUM, broken down by capital raised in 2018, debt investments and geography of investments 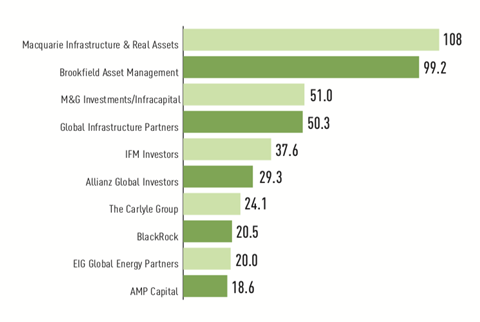 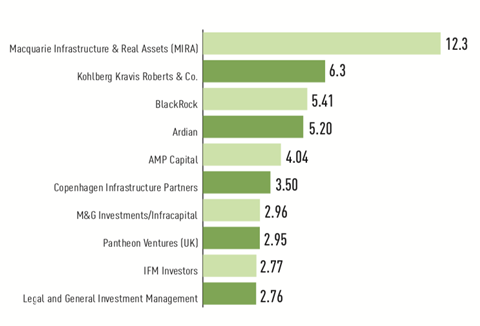 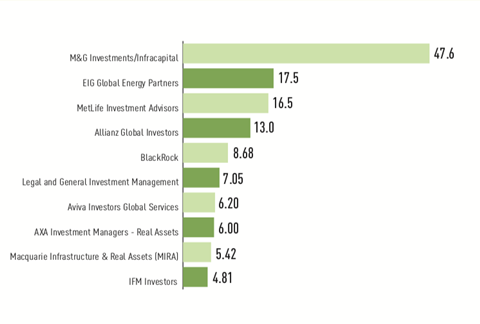 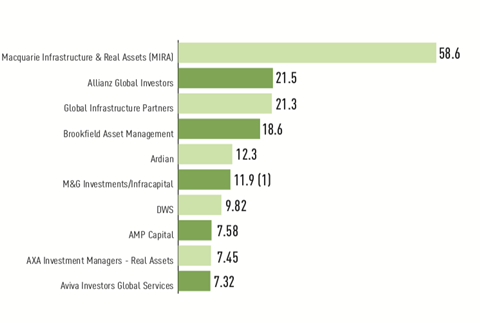 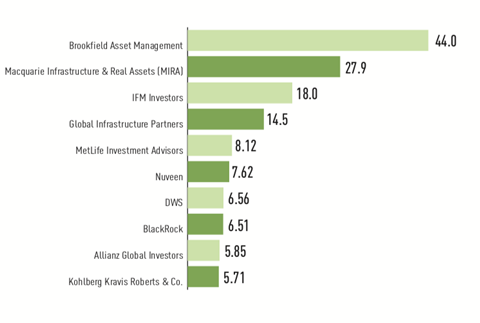 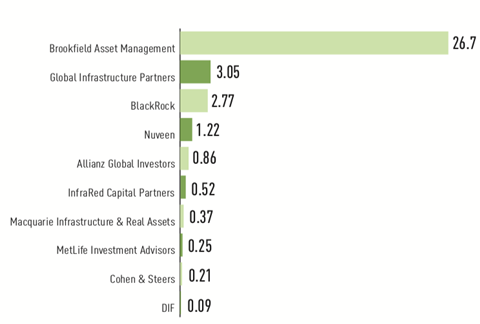 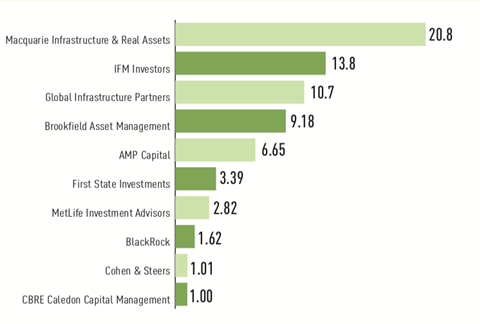 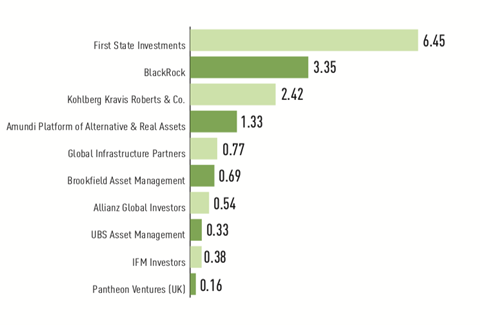