Momentum for the Capital Markets Union has not diminished despite the UK’s planned departure from the EU, writes John Forbes

The European Union Capital Markets Union (CMU) is intended to remove barriers to cross-border investment and lower the cost of funding for business. It is not a single measure but a package of changes that are intended to come into effect in mid-2019, and whose objectives were published in September 2015.

The UK was the driving force of the CMU from the start, before Jonathan Hill resigned as UK Commissioner following the Brexit vote in 2016. Although this could have removed momentum from the CMU, Brexit has created a greater sense of urgency among the other members of the EU.

On 12 March, the European Commission announced the next steps for the CMU, covering four areas:

• Development of the covered bonds market;

• Law applicable to third-party proprietary effects of the cross-border assignment of claims;

• Communication on the law applicable to securities.

However, this does make explicit that the circulation of draft offering documents is marketing rather than pre-marketing. There  is some concern that this represents a backwards step in the UK where the regulator – the FCA – takes a more generous view of what constitutes pre-marketing to allow draft documents to be circulated. This is covered in the FCA Handbook Perimeter Guidance manual. While the change might be inconvenient in the UK, this would not appear to be an insurmountable problem.

The proposed changes also seek to improve transparency by aligning national marketing requirements and regulatory fees. It introduces more consistency in the way these regulatory fees are determined. The directive and regulation are subject to a consultation period that runs until 10 May 2018.

Separately, the European Commission has mandated KPMG to provide a comprehensive study on how AIFMD has worked in practice and to what extent its objectives have been met. As part of this exercise, KPMG conducted an online survey that ran until 31 March. The results of this study are awaited. 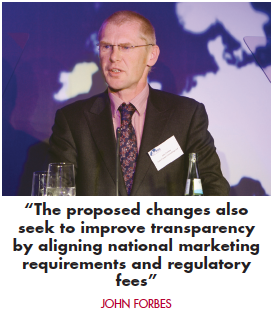 Solvency II, the directive that regulates insurance businesses in the EU, and another key element of the CMU process, has also progressed. This is important for the real estate investment-management industry as life insurance companies are major investors in the asset class. One of the many areas covered by the directive is the Solvency Capital Requirement (SCR) associated with different types of investment.

On 28 February, the European Insurance and Occupational Pensions Authority (EIOPA) issued its second and final advice to the European Commission on SCR standard formulae. The press release was headlined, ‘EIOPA recommends further simplifications to the calculation of insurer’s capital requirements’. This suggests that someone at EIOPA has a strange sense of humour, as the document itself is 612 pages of fiendish complexity. In terms of the areas that we have been following – those relevant to property funds – there is not much change. Three areas are covered in the advice: unrated bonds; unlisted equity; and look-through approach.

For unrated bonds, the advice suggests two new approaches: either an ‘internal assessment approach’ if detailed, specified conditions are met, or ‘use of result approved internal models’ if the insurer co-lends with a bank. Neither would seem to be particularly relevant for real estate lending by funds, and the advice suggests that there was no interest from respondents to the consultation for collateral to be taken into account. This is slightly odd, as the same section also refers to respondents suggesting the slotting regime for banks be followed  – which is all about collateral.

For unlisted equity, no real change is suggested. At present, the base SCR under the standard model for listed equity is 39% and 49% for unlisted. The question addressed by EIOPA is whether there are circumstances in which 39% could be used for unlisted equity. The conclusion is that this might be possible, subject to ESMA confirmation, to certain EU or EEA-based private-equity invested unlisted companies for which the private equity fund and the companies meet a range of convoluted conditions.

The default position for the SCR is a look-through approach for investments by insurers through collective investment undertakings and other investments packaged as funds so that the SCR is calculated on the underlying assets. The changes envisaged relate to situations where the assets of a fund have different SCRs and are ‘grouped’ – for example, bonds with different ratings. This is not  relevant to property, as a standard 25% applies across the board. The proposed changes will not therefore generally be relevant to real estate funds.

While the EIOPA advice is a bit depressing, there is more positive news. On 27 March, the European Commission and EIOPA held a public hearing in Brussels on the ‘2018 review of the Solvency II delegated regulation’.

Two key themes come out of the discussions:

• The comment that the need for insurance and savings products to generate better long-term returns to provide for the retirement of an ageing population has been lost amid the focus on regulatory detail;

• Several participants commented on the importance of developing a pan-European personal pension product (PEPP) as the key retail element of CMU.

In the longer term, the development of a PEPP might prove to be the most significant part of CMU. However, the detail is still awaited and, as has been demonstrated in the UK, there are significant challenges in creating routes to bring retail retirement money into illiquid assets.