“European core funds have come of age,” says veteran of the sector Andy Rofe, head of European real estate at Invesco Real Estate. He recalls a time “when it was just us and CBRE [Investment Management]”.

Both companies launched their pan-European, diversified open-ended core funds more than 10 years ago, and both vehicles continue to lead the market in size, although a number of newer entrants are close on their heels (figure 1).

The 16 open-ended pan-European funds that make up MSCI’s Pan-European Quarterly Property Fund index (PEPFI) had reached an aggregate net asset value of €45bn by the end of 2021. A newer index provided by European real estate association INREV, The European ODCE Fund Quarterly index, which covers 14 funds, also surpassed €40bn of gross asset value for the first time, reaching €41.5bn. Europa Capital announced in April that its Europa Diversified Income Fund was the latest to be admitted to the ODCE index.

The the sector has continued to grow despite the disruption caused by COVID-19. The pandemic had a fairly quick impact, with quarterly total returns turning negative in 2020. But markets have since recovered. The total return for 2021 for all funds in the MSCI PEPFI index was close to 14%. 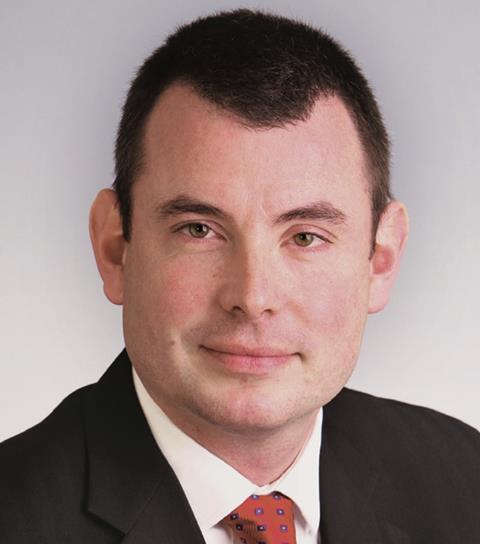 Andy Rofe: “the core space is in much better position than other parts of the real estate market, given that most core funds are overweight in the central European markets”

However, having got back on course after the disruptions of COVID-19, core European funds face more bumps in the road – namely, a war in Ukraine that threatens to undermine Europe’s post-pandemic economic recovery, and rising inflation.

According to MSCI, core balanced European funds have only 4.5% exposure to Central and Eastern Europe. But Germany is the largest country exposure in the index, accounting for about 25%, and this real estate market is expected to be particularly affected by the fallout of the Ukraine crisis. A recent investor survey by INREV found that Germany had slipped from joint top on the list of preferred investment destinations to second from bottom following the outbreak of the war, with 15% of respondents planning to decrease allocations to the market.

“What the current crisis means for Germany is a very good question,” says Rofe. “We’ve always been told that Germany is a safe-haven choice, but clearly it is a supply-side economy with a proximity to the Ukraine and any changes to German economic forecasts will impact on the real estate market. I’m not suggesting Germany needs to be avoided, but we would say that we have a watching brief on the market.”

And core fund managers are confident their vehicles are well placed to deal with inflation. “The core space is much better position than other parts of the real estate market, given that most core funds are overweight in the central European markets, which benefit from having leases linked to CPI [consumer prices index],” says Rofe. “This should be a very effective inflation hedge.”

Pozzato says: “It’s become increasingly clear that the next two years are going to be difficult. Since the conflict in Ukraine began, the already existing inflationary pressures are growing even faster. Nonetheless, core funds will still have an advantage over funds that major on development [because of rising development costs] and are likely to be able to boast a stronger and more resilient tenant base that is more immune to inflationary pressures. I believe core funds will be the last to feel the storm.”

Timothé Rauly, global CIO and head of fund management at AXA IM Alts, says: “Low leverage means we are also less sensitive to interest rate changes, and we don’t have the high gearing that characterises many other parts of the market.”

Crawshaw, a consultant, is also bullish on European core funds. “The changing inflationary climate may lead to a difference between the performance of European and UK funds,” he suggests. “European leases tend to be more inflation-linked, albeit on typically shorter leases than the majority of assets in the UK. In a higher inflationary environment the frequency and nature of rent reviews, including if there are caps to the uplifts, may impact value.”

To hug or not to hug

But there are other difficult, more structural questions facing core European funds. Real estate is changing in many ways, including: working from home and an urgency to decarbonise buildings which is causing uncertainty and disruption in office markets; retail and logistics are both suffering and benefitting from the rise in e-commerce; demographic trends are calling for a wide range of affordable forms of residential assets; and real estate is becoming more service-oriented and requiring greater operational expertise.

European core funds inevitably need to move with the times, but this is no mean feat, especially for the larger, longer-established vehicles. The make-up of their portfolios is certainly starting to shift; industrial is now the second-largest sector exposure of all balanced funds in the PEPFI index at 26.9%. Four years ago it was third at 17.4%. But office remains the biggest sector exposure (42.2% versus 44.6% in 2018), and residential only represents 10.7% (albeit up from 3.2% in 2018), while hotels and everything else account for 2.3% and 0.5%, respectively.

This could be explained by the fact that, rather than making a big push into residential and alternative sectors through their pan-European core funds, fund managers are often launching sector-specific funds to capture the demand from investors.

Will Robson, global head of real estate solutions research at MSCI, says: “To some extent we are seeing the core fund space divide into three sub-sectors.” First there is “an increasing number of specialist-sector funds, which are nonetheless defined as core”. Then there are the “existing traditional core funds” which have built up diversified portfolios that are “very close to the index” in terms of sector allocation. Lastly, Robson says, there is “the emergence of a new class” of funds. These are not sector specific and are pursuing a diversified approach, but they are willing to “take larger bets on individual sectors”, he says. “In other words, ‘old core’, ‘aggressive core’ and ‘sector specialist’,” he suggests. 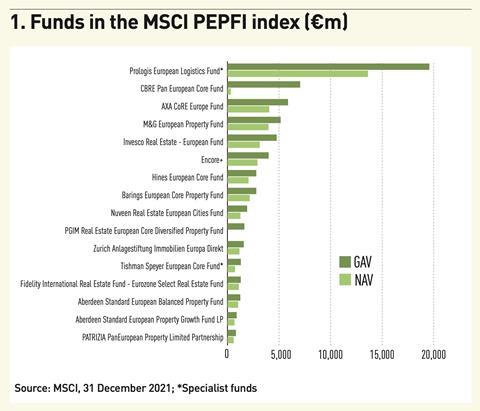 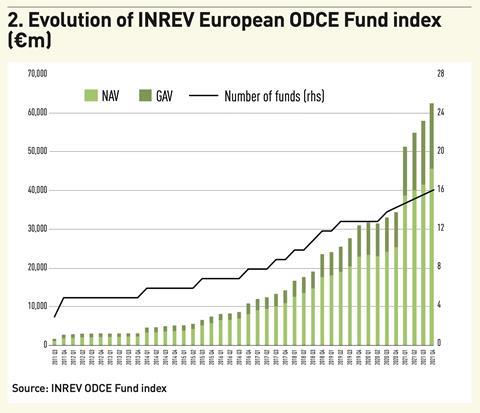 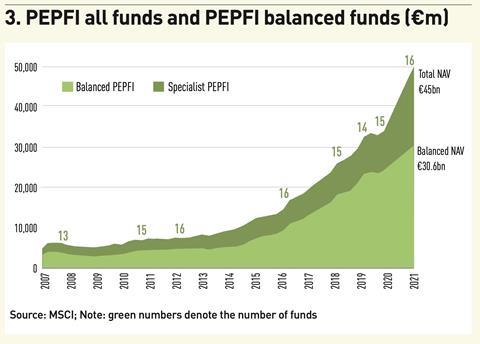 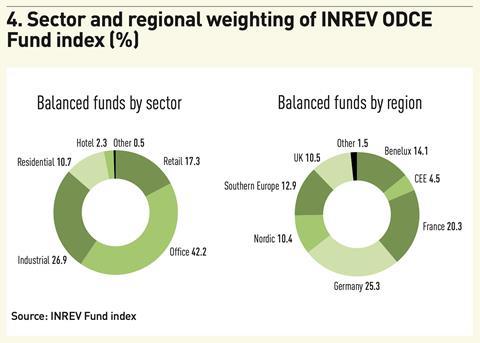 It is not surprising to see that two of the relatively newer core balanced funds – AXA CoRE Europe Fund and PGIM Real Estate European Core Diversified Property Fund – have the largest exposures to residential, representing about a quarter of their portfolios. However, the Aberdeen Standard European Balanced Property Fund, which was established in 2006, has the highest weighting to industrial in the index, at about 45%.

It is possible that sector weightings are becoming more influential in determining performance. A factor analysis of the MSCI UK Quarterly Property index found points in this direction. “The distribution of returns has widened across core real estate markets,” says Robson. “We used to find that 16% of the differential performance could be attributed to sector selection in any quarter. Recently that has risen to 35%.”

It all raises a question for core fund managers looking at the benchmark: to hug or not to hug? Crawshaw leans to the latter. “We don’t want a fund that follows the crowd, we want a fund manager who has ‘disrupted logic’, who can think more broadly about what constitutes the best sectors in real estate to invest in,” he says. “Core funds need to abandon the straitjacket of portfolio construction whereby they have specific sectoral target guidelines with positive or negative maximum bands so they can better apply their investment convictions.

“What makes a core fund a core fund in my opinion, is not a broad diversification across sectors… [but rather] by security of income, quality of building and location and its asset’s ‘re-let-ability’, overlaid with a long-term investment approach which can guarantee our clients sustainable returns into the future.”

But Pozzato – whose fund at the end of 2021 had a 51.3% weighting to offices, 18.8% to retail, 16.3% to industrial, 11.5% to residential and 2.1% to alternatives – is not entirely convinced. “Whilst sector hugging is never appropriate, some of the very high sector allocations in certain funds – such as 50% to logistics – to me could represent… an inappropriate over-allocation in the balanced core fund space.

“Equally, it does not seem appropriate that some of the most recently launched funds have no retail sector allocation at all, given we have observed an amazing run of logistics yield. Opportunities might lie in the future in the retail sector. Selling out completely from the sector seems a high-risk strategy. Core funds must be about diversification, balancing risks, and opportunities.”

‘Core funds are not boring’

Hines recently a launched a pan-European core-plus real estate fund called Hines European Property Partners (HEPP), which is designed to complement its existing core fund, HECF. Unlike the core fund, HEPP is not part of the PEPFI or ODCE indices, it is open-ended – and so perhaps represents a fourth category to Robson’s list of “old core”, “aggressive core” and “sector specialist”.

HEPP’s fund manager Jorge Duarte says: “HEPP targets 9-11% returns and a third of this is expected to come from income. Comparatively, HECF is part of the ODCE [and PEPFI] benchmark with a target return of 6-7% mainly derived from income and income growth. HEPP is an income play targeting long-term value creation using a myriad of strategic tactics, including modernising, repositioning, and adding space, as well as a 20% allocation to build-to-core. HEPP targets 45% leverage, versus a 30% target for HECF.”

“We launched core-plus in Europe at the end of last year, focusing on substantially stabilised assets in structurally growing sectors like logistics, residential, student accommodation and next generation offices,” he says. “Our investors… get exposure to quality assets with the upside benefit of more active management than traditional core funds.”

He adds: “As the core-plus sector is more nascent in Europe, I expect we will see strong growth in the medium term as investors re-evaluate their risk appetites while continuing to search for better risk-adjusted returns in a dynamic macro-environment, with heightened risk and volatility.”

But Gibson is also optimistic about traditional core funds. “Many large international institutional investors remain under-allocated to real assets, including real estate, and core funds are a good way to build diversified exposure,” he says.

Pozzato is also quick the dispel the notion that traditional core funds cannot be dynamic. “Core funds are not boring,” he says. “I always remind my team that we are on 12 months’ notice from our customers. It is important for the sector generally to now navigate the disruption which has been caused by the work-from-home phenomenon, where it seems highly likely most people work three days in the office, not five, and that the demands for office space will be different – higher-quality collective space for occasional collaboration. We must recycle our products for what the market wants.”

There is also the fact the MSCI PEPFI and INREV ODCE indices are a quarter of the size of the NCREIF ODCE index, their US counterpart. This suggests there is substantial room to grow.

Robson says: “Whilst the European economies as a whole are similar in size to the US, there are good reasons the core fund space lagged the US – most obviously the high legal and operational costs of operating in multiple single markets. As real estate allocations get bigger, however, pressure to diversify away from home markets supports the growth of core funds.”