Based on the past two decades, now could be the time for institutional investors to turn their attention to Indian real estate, writes Manfred Kupka

Stock markets in BRICS and other emerging economies are quite correlated to those of developed markets. It seems that the stock market boom is over, but the time for real estate has only just started.

Real estate markets are lagging behind stock markets because, first of all, companies need to grow, typically by raising capital on primary public markets. Job growth, consumption, and real estate demand will depend on the companies’ growth. A US Treasury taskforce concludes that 92% of job growth in companies is created following an initial public offering (IPO), with the strongest in emerging growth companies of small to medium size. In emerging market economies, where access to capital resources is key to economic growth, this might be even more so. And in countries with rural poverty, lower wages will further facilitate job creation.

If a company has strengthened its capital position through an IPO and has begun to fulfil larger orders, it is likely to increase its workforce and may require more office space. The former low-income farm workers are now employed with the publicly listed company. They will join the middle class, boosting demand for residential and retail space. In addition, middle managers will be looking to buy new homes. At this stage, foreign direct investment (FDI) becomes of interest to institutional investors. Office buildings that are fully let provide opportunities for high-income returns through direct investments or real estate investment trusts (REITs).

A study* carried out for 29 emerging markets concludes that financial markets and FDI positively affect each other. FDI increases pursuant to developed stock markets. Venture capital and private equity help to develop a stock market. The stock market, in turn, attracts FDI, which ultimately has a stabilising effect on real asset returns. Financial markets, including stock markets, in China, India and Indonesia are classified as ‘secondary emerging’. Nigeria is still a frontier financial market with an underdeveloped stock market. In terms of FDI, the country is running behind the others. China attracted maximum FDI until 2015. Significant FDI in India started in 2005 and then again with a further increase from 2012 onwards. Indonesia had a sharp decline in 1996, followed by large capital outflows until 2010.

“Large-scale capitalisation of Indian companies started in 2009, and in 2012 institutional real estate investment and FDI picked up significantly. Private equity-driven IPOs in the 1990s helped to develop the Indian stock market for large IPOs in the 2000s and, furthermore, for FDI investments in real estate since 2012”

Low-income rural populations follow job prospects, and jobs are predominantly created in urban areas. As a consequence, urbanisation is gathering momentum. According to the UN, an additional one billion people will have moved to cities by 2030, bringing the urban world population to five billion, 730m of whom will be living in 41 megacities of 10m or more. China and India will have seven megacities each; Indonesia and Nigeria will each have one.

The rate of urbanisation in Indonesia and Nigeria is presently 45-55%. China’s 50% rate demonstrates that the country is ahead of urban India, where 32% of the population live in cities. That puts India in the advantageous position to learn from China’s practical experience.

Population movements in China are driven by an urban master plan created by the central government in Beijing. For example, transforming tier-three and tier-four cities into tier-two cities entailed only a few steps. First, connectivity to the bullet train was provided by building train stations. It also signalled a future tier-two city. Further steps included job creation by establishing business enterprises and housing construction on a large scale. Forced population movements, however, bear risks of pricing bubbles, oversupply and vacancies, as witnessed in China.

Figure 1 suggests that past urbanisation was pushed forward at a rapid pace by China’s urban master plan. High rates of urban population growth in the 1990s and 2000s go along with similar rural population declines during these decades. By 2030, 70% of China’s population is expected to be urbanised, increasing to 80% in 2050 – and then China is done. 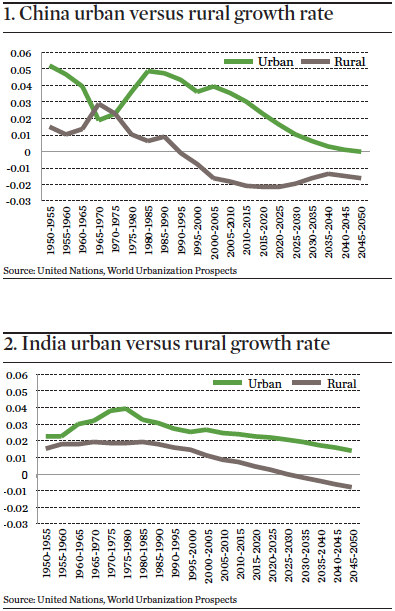 In comparison, urban population growth and rural population decline in India is expected to take longer. The respective curves, running almost parallel, suggest urbanisation led naturally by people moving to cities to find work. India will have a 40% urbanisation rate in 2030 rising to 50% in 2050, and still increasing.

Natural urbanisation, even if supported by the government, goes along with a lower risk of volatility in real estate prices. The Smart Cities campaign and ‘Housing for All by 2022’ are two examples of government-supported initiatives in India. The former envisages social equality, economic viability, and environmental sustainability, taking its inspiration from the low carbon footprint of Seattle, the transportation in London, and the ‘e-governance’ services in Hong Kong.

The Housing for All by 2022 mission is supported by tax breaks for developers constructing housing up to 30sqm in the top four Indian cities and up to 60sqm in other locations. Furthermore, interest-rate subsidies on affordable housing loans has been provided by the federal government and, finally, the real estate regulatory authority strengthens and protects consumer rights and will lead to improved governance in the housing sector.

It is important to take a closer look at company growth in India. The level of capital raised through IPOs in India was low in the 1990s, despite the high number of companies going public (figure 3). In the 2000s, however, capital raised on stock markets increased tremendously, despite the number of IPOs declining significantly. India’s largest IPOs took place between 2004 and 2015, including blue chip companies like Coal India, Tata Consultancy Services, and Oil and Natural Gas Commission. Benign inflation and falling interest rates following the demonetisation in November 2016 have further boosted the equity markets in 2017. 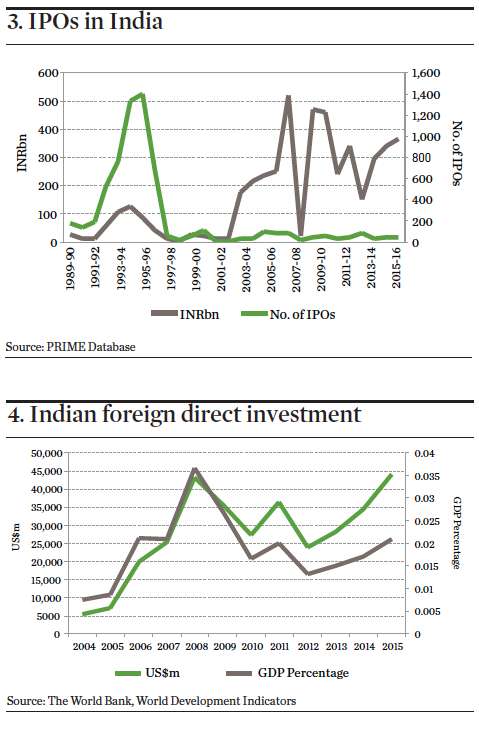 Large-scale capitalisation of Indian companies started in 2009, and in 2012 institutional real estate investment and FDI picked up significantly. Private equity-driven IPOs in the 1990s helped to develop the Indian stock market for large IPOs in the 2000s and, furthermore, for FDI investments in real estate since 2012.

Narendra Modi was elected in 2014 as Indian prime minister. The expectation is that India under Modi can achieve an average growth of 6.75% annually over the next decade. The Make-In-India initiative is supposed to boost manufacturing and job growth. With the majority of FDI in the manufacturing sector, the initiative had a successful launch.

The demand for real estate space in India is 7.2bn sqm, accounting for 9% of global real estate space to be built until about 2025. After agriculture and manufacturing, the real estate sector is the third-largest employer and the third-highest contributor to the Indian economy. The construction sector has the potential to create about 50m jobs and the manufacturing sector could create some 21-27m jobs over the next decade. Interest rates on housing loans have fallen almost 150bps in the past year, especially after demonetisation, and are likely to go down further. Transparency in the real estate market has improved on the back of regulatory reforms. The Real Estate Regulatory Bill was passed in 2016, and the Securities and Exchange Board of India has now implemented the REIT and Infrastructure Investments Trusts (InvIT) guidelines, with an exemption of dividend distribution tax.

Some IPOs of InvITs have already been successfully concluded in 2017 and IPOs of REITs are expected shortly. Several reputed international real estate groups, including sovereign wealth and pension funds, have acquired income-producing office assets in the past few years. According to market sources, India’s first office REIT listing could happen by the end of this year or early 2018.

India has one of the largest housing markets in the world. According to estimates by Cushman & Wakefield made a few years ago, the shortage of housing plus the expected future demand has increased to 88.78m units in all segments. With residential demand accounting for 75% of total space demand, the average unit size is about 61sqm. Foreign investment in middle-class housing is typically made through private real estate funds. Investments in the Indian real estate sector increased to a total of US$5.4bn in 2016. Private real estate is the biggest source of institutional investment. The demand in the mid-income housing market over the next decade is about 3-3.5m units.

Note: This article was updated to correct the labelling of the chart in figure 3.