Real estate secondaries is a fast-growing and evolving space, one that investors should not ignore. Florence Chong reports

Secondaries – the trading of interests in closed-ended funds – is quickly becoming an important sub-sector of the real estate asset class. Managers of real estate secondaries funds are no longer bit players in real estate capital markets, and the line between secondary and direct investment is becoming blurred.

The traditional role of the secondary market was to provide liquidity to investors, or limited partners (LPs), needing to sell holdings in closed-ended private real estate funds. But the picture is evolving.

According to one US-based secondaries manager, speaking anonymously, only 20% of LP-led sales last year were secondary transactions. The bulk of capital went to fund continuation vehicles. “We have done deals with both local developers and operating partners, and sometimes we have also replaced traditional fund investors in a continuation structure,” the manager says.

The shift from LP to general partner (GP)-led deals has been “pretty dramatic” and sometimes the lines between direct real and secondary real estate are “a little blurry on both sides”, he adds.

Secondaries specialist Landmark Partners – which was acquired by Ares Management last year – released a report on 2021 transactions, showing that GP-led transactions involving recapitalisation of funds and property portfolios reached US$7bn (€6.2bn) in 2021 – a 25% increase from US$5.6bn in 2020. 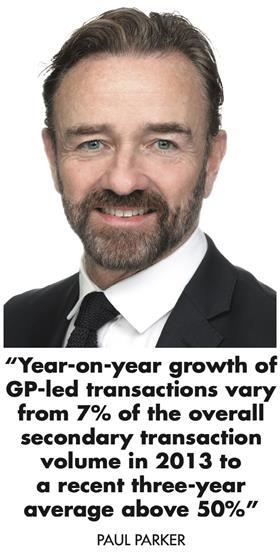 Over the past five years, Landmark notes, recapitalisation transactions have grown at an annualised rate of 38% as the number of fund sponsors looking to proactively manage the liquidity of their funds and partnerships continues to grow. In total, 153 transactions, valued at some US$10.6bn in net asset value were recorded last year – up from US$8.5bn in 2020.

North America and Europe have seen “exponential growth” in GP-led transactions, says Parker, and this trend has spread to Asia. “China is a good example of an untapped market with vast exposure to real estate. We expect to see adoption of GP-led transactions from East Asia to grow rapidly.”

Sarah Schwarzschild, co-head and managing director of BGO Strategic Capital Partners at BentallGreenOak, says: “GP-led transactions accounted for approximately one third of all secondaries done globally in 2017, and, by 2020, they accounted for around two-thirds. In the last five to seven years, the real estate secondary market has been between US$4bn and US$6bn. We now expect the market to expand to more than US$10bn and to continue to grow due to rapid adoption of GP-led transactions.”

GPs source capital from secondary fund managers to pay out LPs and in return for the ability hold on to assets for longer. For example, they can roll over a portfolio from a close-ended fund to a new vehicle, or a continuation vehicle. 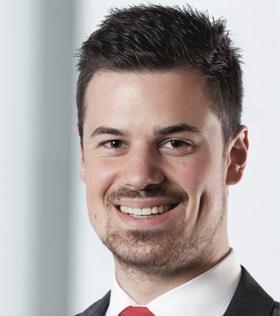 Germany’s largest pension fund, BVK, is looking to gain a bigger slice of the secondaries opportunity in real estate, committing €300m to a dedicated platform with StepStone.

Daniel Kiefl, global real estate investment manager at BVK, says: “We have already invested a decent portion of commitment, which proves that there is enough volume and liquidity in the market. However, we aim to achieve a broad diversification, including by [fund] vintages.”

Kiefl says historical returns from secondaries have been “appealing”. BVK has been investing in private equity secondaries for 10 years.

Parker says there is a good business rationale to hold assets for longer to harvest unrealised value assets. There is a “persistent duration mismatch”, he says, between the stated term of a fund and the reality of buying, fixing and selling real estate assets. “Data that we’ve analysed indicates that closed-ended real estate funds are typically only 70% realised by the time of the initial fund maturity. We further estimate that more than US$90bn of NAV is held in funds over eight years’ old.”

One source says: “We have seen a lot of special situations opportunities, some of them preferential investment in the last couple of years. We see real estate asset managers who don’t want to sell their assets but need partial liquidity. They do preferential equity deals with secondary fund managers. We did two such deals last year.”

The source says such situations are more common in sectors affected by COVID-19, such as hospitality, retail and office. These types of deals are uncommon in private-equity secondary markets, because in that asset class managers are not generally able to acquire 10 companies at once. But in real estate secondaries players can buy portfolios of different hotels in different geographies and with separate operators.

Schwarzschild says the pandemic has become the latest catalyst for real estate secondaries. She also believes the market has broadened from one focused on transactions and acquisition of LP stakes to one “more grounded in capital solutions” for GPs.

“We see deals where secondary investors have the opportunity to inject more capital into a vehicle at a time when it is needed. Before the pandemic there really wasn’t widespread adoption of these types of transactions,” she says.

Managers source capital from secondary investors for recapitalisation at the fund level, or into a pool of assets or for just a single asset. The variety of deals today has made the market more dynamic, she adds.

Parker says disruptive events like COVID-19 tend to lead to the extension of holding periods for assets. GPs need to consider the objectives of their investors, he says. “They need to find a compromise, and that is where the secondaries market steps in.”

In 2021, transactions involving in-favour sectors, such as rental housing, logistics and data centres, accounted for $5.2bn, or 74% of the total global recapitalisation volume.

Despite secondary managers adopting more flexible approaches to close deals, one player says a wide gap remains between potential and actual transactions. “We looked at US$53bn of potential real estate secondaries last year – 38% up on the year before and 50% more than we looked at in 2020,” he says. “Overall, the industry only transacted on a fraction of the potential number. You have a lot of deals out there waiting to be done.”

This is a view shared by many managers, and it has become a key motivation for new entrants into what has been an exclusive club. Currently, the market is carved up among a small handful of managers, including Blackstone’s Strategic Partners, Partners Group, Goldman Sachs, Stepstone Group, Ares, and BentnallGreenOak.

The past year has seen two of the industry’s best-known names – Landmark Partners and Metropolitan Real Estate – taken over by groups seeking to expand into the secondary space. Ares Management bought out Landmark, while BentallGreenOak acquired Metropolitan.

Brookfield Asset Management recruited two executives from Partners Group – Marcus Day and Fabian Neuenschwander – because of their expertise in real estate secondaries. Brookfield has also been building a team for infrastructure secondaries. 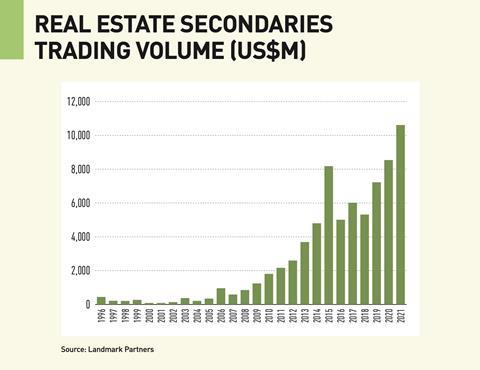 Brookfield CEO Bruce Flatt has told investors that the group see secondaries in private assets “as one of four avenues of growth”, and that it has the potential to become a US$50bn business. Brookfield has already raised US$1.5bn for its inaugural Brookfield Real Estate Secondaries Fund, which is reportedly seeking to raise up to U$3bn. 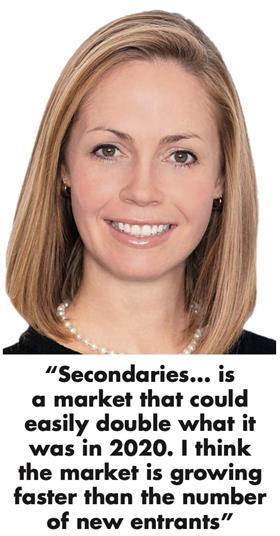 “We have a particular focus on logistics, multi-family, life sciences, self-storage, student housing, build-to-rent, and select office in the highest growth markets around the world. Such transactions are complex.”

Parker says: “At Landmark, we have tracked global real estate secondaries transactions volumes since 2005. There is a close correlation between the growth of assets under management in private real estate investments and secondaries volumes. Total AUM in closed-ended institutional funds has now surpassed US$1trn.”

Preqin statistics show that US$7.29bn was raised in the US in 2020, with the US$2.75bn Goldman Sachs Vintage Strategies Fund the largest fund to close. Strategic Partners, Blackstone’s secondary and fund solutions business, held its final close on US$1.9bn for Strategic Partners Real Estate VII fund, also in 2020.

The industry appears to be set up for more competition. “We are not concerned that new entrants will dilute our market share,” says one source. “It will help meet more of the demand for liquidity. The other

point is that some of these GP-led continuation deals are too large for a single buyer. In these cases, you need a couple of people to come in with you. We have done a couple of deals lately with Blackstone Real Estate secondaries. Neither of us want to do it all ourselves.”

Schwarzschild adds: “Secondaries are still a relatively inefficient market with a relatively limited competitive landscape. It is a market that could easily double what it was in 2020. I think the market is growing faster than the number of new entrants. The pie is getting bigger and there should be a lot of opportunity for all of us.”