“Europe’s population growth is essentially flat, but there are considerable differences between countries, and the growth of cities is highly significant,” Allen says. “But there is a very strong global urbanisation trend, and the speed of this in European cities is more familiar to emerging market countries.”

Because of limited space in many cities, urbanisation has resulted in planning authorities relaxing change-of-use rules to increase the supply of residential accommodation.

Permitted development rights (PDR) introduced in the UK in 2013 to help meet demand for housing, allow office buildings to be converted to residential use without the need for planning consent. “A lot of offices have been converted into homes and, arguably, that is the best thing that’s happened to the office market in recent years, because investments have benefited from the supply coming down,” Allen says.

What the other fundamental demographic trend – an ageing population – means for real estate is less clear. While it will undoubtedly create more demand for specialist healthcare and retirement housing, it does not pose a straightforward opportunity.

“People don’t think about that quite as much as they should,” he says. “When we look closely across Europe at senior and care-related real estate, we observe very varied dynamics as to what residents need, how flexibility can be accommodated, how payment structures work and, of course, how this is done in a fair and appropriate way for residents.” 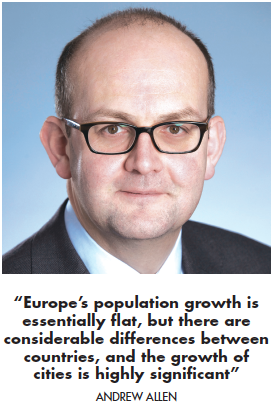 The investment story differs very much for real estate aimed at individuals who can fund their own accommodation and property that would serve those who rely more on public support. And then there are the different levels of care required by people.

“It’s also not obvious who is going to pay for this,” he says, referring to government welfare policy.

Added to this uncertainty, is a lack of trust in age-related care provision, he says, citing the Southern Cross Healthcare, a care-homes owner that collapsed in 2011 after rapid expansion and was mired in an abuse scandal.

“The model is not anywhere near where it should be and there are few consistencies across Europe, even though there are plenty of innovations being explored,” Allen says.

Kenneth MacKenzie, chief executive of Target Fund Managers, which runs the Target HealthCare REIT, says the firm’s tenants and the whole sector in the UK is seeing increased demand for care home places, due to demographic pressure and also because more beds are leaving the sector than are being created, year by year.

“The numbers of elderly – in our case, those over 85 years – continues to grow and is expected to double in the next 20 years,” he says. One in seven of these spends on average the last 12 to 18 months of their lives in residential care.

But although other investors have identified an opportunity and are moving into the sector, the opportunity is not quite as simple as it seems, he says. “Ultimately the sector is a services business, that happens to use real estate – and that is forgotten at the peril of the investment community.”

Changes in behaviour and wealth at both ends of the adult age spectrum are having serious implications for the retail sector. While older generations have generally become richer in recent decades, young adults are displaying different spending habits. They have much less capital to spend and are more likely to shop online, says Allen. Owners of retail property, such as shopping centres, must respond by becoming more inclusive, he adds. 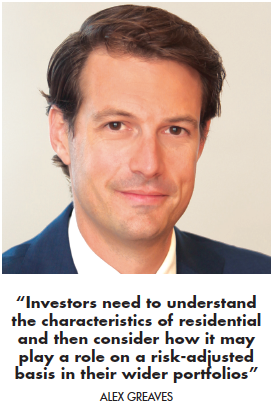 “The clumsy reaction for many is to simply put more food and beverage facilities into retail environments, but it is about being as inclusive as possible for the wider community to establish a sense of place attracting young mums, the elderly and people who may have disability issues, for example,” he says. “It’s not only the right thing to do, but it makes good investment sense too.”

With births increasing at a greater pace than deaths, increased life expectancy, immigration and a reduction of occupants per household means more people and greater demand, says Alex Greaves, head of residential at M&G Real Estate.

“At the same time, it has been well documented that the supply has not kept up with demand for decades,” he says. “The rise in house prices combined with increased indebtedness of students after graduation has increased the average age of the first-time buyer to mid-30s. From graduation to homeownership there is now a 10 to 15-year journey, where renting – a model previously more common in mainland Europe – is the most likely option. We also see a potential demand for renting from empty nesters, silver surfers and downsizers. This is currently a smaller market but is increasing.”

Matt Hall, associate director of European research at Invesco Real Estate, says demographics are exerting power over the real estate sector in a different way – via pension funds’ funding needs. “We are already starting to see a change in the real estate sector due to pressure from insurers and pension funds trying to match liabilities to annuities,” he says. “Pricing for long-dated income has come under significant downward pressure as investors start to increase their allocation to real estate in the face of unattractive pricing in the fixed-income market. Demographic pressures hint that we are still in the early stages of this emerging trend.”

“Long-let logistics, supermarkets and hotels all present attractive opportunities for liability matchers due to the prevalence of indexed leases and covenant quality”

Western Europe is at an inflection point in the composition of its workforce, Hall says. The number of working-age people has peaked, and is expected to fall between now and 2040 by about 10%, and at the same time, the number of people beyond traditional retirement age is forecast to grow by about 44%, he says.

Demand for annuity-type products are set to grow, and assets leased with rental links to inflation and long leases are prime candidates to fulfil pension fund needs.

“Long-let logistics, supermarkets and hotels all present attractive opportunities for liability matchers due to the prevalence of indexed leases and covenant quality,” Hall says.

Given demographic projections, how should investors restructure their portfolios over time? M&G Real Estate believes alternatives, including residential, will become more important in portfolio construction. “Investors need to understand the characteristics of residential and then consider how it may play a role on a risk-adjusted basis in their wider portfolios,” Greaves says.

He pinpoints three key characteristics to look at when considering residential relative to commercial property: one, residential’s defensive nature and performance during downturns; two, the demand and supply imbalance; and three, diversification – its low correlation with equities and commercial property.

Australian fund manager AMP Capital bolstered its presence in the European healthcare market in December by acquiring the UK’s fourth-largest specialist healthcare company, The Regard Group. It followed AMP’s entry into the Irish market in February 2017, when its Irish Infrastructure Fund set up Valley Healthcare.

AMP Capital, on behalf of its global infrastructure equity fund, acquired The Regard Group from Montreux Healthcare Fund and Macquarie Principal Finance. The Regard Group has 161 services and 1,186 beds in the UK, with a focus on England and Wales.

In Ireland, Valley Healthcare has acquired two primary care centres in Wicklow and County Mayo. These operate on a 25-year lease from the Irish Health Services Executive. The AMP strategy is to establish between 10 and 20 primary care centres across Ireland over the next three years or so.

Ruben Bhagobati, AMP Capital Infrastructure equity principal, says AMP Capital has been investing in health assets for more than 15 years: “We believe there are significant opportunities for health investment as a result of societal changes,” he says.

“Demand for health and social care is growing. In England, the population over 85 is expected to more than double over the next two decades. This combines with the growing prevalence of conditions of affluence.”

Bhagobati says, although people are living longer they can expect to live more years in poorer health. This growth in demand is placing pressure on services. For example, the Care Quality Commission in England estimates that 1.2m people – or one in eight older people – are not receiving the help they need.

Daniel Rigny describes the scale of institutional investment in French housing as “moderate”, with turnover of about €2bn per year. But he believes this is about to change.

The plan is to triple the size of the portfolio in three years. Based on Rigny’s €2bn annual turnover figure, the plan must either assume Powerhouse Habitat can dominate the market – or is predicated on annual transaction volumes increasing substantially.

It is the latter, says Rigny. He believes France is about to see big shifts in housing ownership. The biggest source will be social housing companies, which are under growing financial and regulatory pressure from government, and will look to focus on their core operations.

“Because of all this financial pressure, we think social housing companies will consider selling their intermediary housing to focus… on the purely social housing segment,” says Rigny. “Private companies like ours will have a much bigger role to play in years to come.”

Then there are the ad-hoc opportunities, similar to the beginnings of the EDF portfolio, which was sold by the energy group to raise cash in 2000. State railways group SNCF, for example, is looking to sell €1bn of its real estate to private investors.

And there are institutional owners of middle-income properties that could look to sell in the coming years. TwentyTwo, Rigny says, is “looking to have dialogue with them so they contribute their assets to a larger, more diversified portfolio”.