Catella and Elithis are building energy-positive housing across Europe

Catella and Elithis plan to put electricity back into the grid by building energy-positive housing across Europe. Rachel Fixsen reports

Hopes are high at Catella Residential Investment Management (CRIM) for the eye-catching environmentally and socially friendly buildings it is developing alongside French engineering firm Elithis – not least because they address two of Europe’s major real estate needs, according to the Swedish-headquartered firm.

Described by their creators as energy-positive, the buildings the French company has designed go far beyond minimum-required standards of energy efficiency by incorporating a range of features. The result is a block of apartments that generates more energy than is consumed by its occupants.

“The ambitious work we are doing on this with Elithis is not only a great business opportunity for us, but also an example of what we can do to meet the twin challenges of climate change and affordable housing in cities,” says Michael Fink, CRIM’s Berlin-based managing director.

Elithis, which has its head office in the signature eco-friendly tower block its team designed more than a decade ago in the eastern French city of Dijon, is the original creator of CO2-neutral office buildings. Then, in 2018, the firm completed the world’s first energy-positive residential tower – the Elithis Danube Tower in Strasbourg.

Because the energy-positive towers generate more energy than tenants consume, and supply surplus power back to national grids, Catella can offer apartments at affordable rents because the savings are shared between tenants and investors. 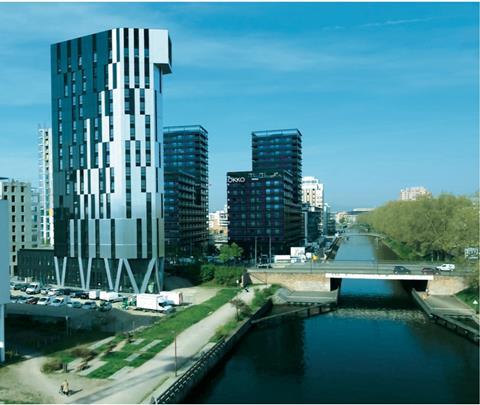 The result, says the firm, is a “European residential investment proposition that is unprecedented in both its scale and ambition for sustainability and social responsibility.” The idea of sharing the cost savings in this way also fits in with the anti-fragility element that CRIM incorporated into its investment strategy after the 2008 financial crisis – as a de-risking measure.

Last November, Catella agreed to invest €2bn to build 100 Elithis-designed energy-positive residential towers across Europe by 2030. The programme is to start in France and later expand across the continent.

Fink sees huge climate change-mitigation potential in erecting such energy-positive buildings rather than continuing construction according to current green standards. If all of the 1.5m apartments built in the EU each year were energy-positive, he says, 5m tonnes of CO2 emissions would be saved annually.

Elithis has identified six to seven plots on which to build the towers in cities across France, starting with Dijon and Saint-Etienne. Thierry Bievre, CEO of Elithis says: “In 12 months’ time, we would like to start work on the first towers in Germany or the Netherlands.”

Leading the pack in a new trend involves risks, Fink admits. This means you must get stakeholders behind you, he says, citing Catella’s experience in getting the go-ahead to set up the first European residential fund more than 10 years ago, and the first pan-European student housing fund in 2013. The same applies to Elithis, he adds.

Urbanisation, migratory flows and an increase in single-person households have combined to put a strain on housing supply in many of Europe’s main cities. CRIM says its research estimates there is a need for about 970,000 new homes every year across the European continent. To meet the social ambitions of the Elithis real estate project, pricing is important, Fink explains.

Bievre says: “It’s no more expensive to build these towers than to put up a normal residential tower. That is why it is scaleable to our level of ambition. In the Strasbourg tower, the average family saves €1,600 a year, so the rental level is more affordable than in a conventional apartment.”

As well as using rooftop solar panels, the south facade of the Elithis towers consists of solar panels. The towers’ energy-saving credentials are the result of many features – some of them small and low tech, but it is the right combination that is key, Bievre says. “If you take a shower, the waste water is processed to capture the heat, for example, and as a smart building, push notifications are sent to tenants in the summer telling them to open or close the blinds.”

The tower itself is shaped like a wing and angled to face the prevailing wind, which reduces wind resistance and therefore means less expensive materials have to be used in the building’s original construction.

Another key design feature of the buildings is moveable internal walls, making the space flexible and therefore reducing the need for costly and resource-heavy change-of-use reconstruction. Rather than being demolished in 40 years’ time, accommodation in the towers can be transformed relatively easily into other types of residential, or even into office space if needed.

CRIM is confident that there is investor demand for such cutting-edge real estate. “For institutional investors, it is more and more important to think about the long-term environmental impact of their property assets; they have to report on the climate resilience of their buildings,” Fink says.

In the bigger picture of the transition to a low-carbon economy, Fink says governments cannot make the necessary changes alone. “Private money is needed too, including investment in the residential market,” he says.

“We are not naive and we will not change the world, but we think what we are offering here is unique because it ticks two crucial boxes – both affordability and climate, whereas normally an investment only ticks one of these.”