Digitisation and changing dynamics in pensions means the illiquid real estate asset class will need to adapt to a world of electronic trading, write John Forbes and Rob Martin

In the aftermath of the EU referendum, UK real estate funds once again hit the headlines as some investors sought to withdraw capital at short notice. More broadly, there are several factors influencing investor tolerance of and appetite for illiquidity.

In May, we offered some thoughts on the issues at the IPF 30th Anniversary Symposium in London, summarised here.

The Retail Distribution Review (RDR) was a major overhaul of financial services legislation for retail investment advice and came into effect in 2013. The changes introduced under RDR have sped up change in investment by retail investors. A key development was the introduction of architecture to allow model portfolios to be run directly on the platforms. Although this started before the RDR, it has developed more significantly since then, with the huge growth in investment through model portfolios. It is now extremely easy for intermediaries to:

Furthermore, the platforms have become enormously important in the flow of investment into funds (structural and operational constraints arising from platforms become increasingly significant).

And the ability of intermediaries to change investments across portfolios instantly could greatly increase volatility, although this has not happened in practice. Engagement between the property fund manager and the ultimate investor has become harder.

DC provision faces many of the same challenges as retail investment though platforms – low financial literacy is a particular issue. The market is hugely fragmented – the average DC scheme has assets of about £1.5m (€1.7m) compared to £200m for DC schemes. This has major implications for asset allocation as small schemes are less well placed to deal with the relative complexity of illiquid assets. As with retail investors, the current platform architecture, which administers most DC schemes requires daily pricing and dealing. 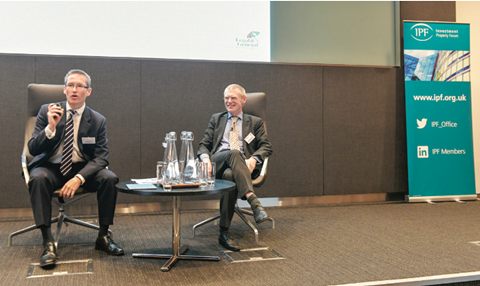 Insurance products are also seeing similar changes, shifting away from traditional ‘with-profits’ schemes to unit-linked funds where the investment risk is passed to the policyholder. Many of the implications are the same as for the shift from DB to DC provision with an additional regulatory impetus from the Solvency II Directive.

Although traditional DB products are in long-term decline, this does not automatically translate into a shift away from illiquid assets. Over the course of 2010-17, nearly £70bn of liabilities were transferred from corporate pension schemes to life insurers (‘bulk annuity buy-outs’). Just three insurers acquired more than 70% of the liabilities transferred, leading  to a consolidation in the management of mature pension assets. For some of these insurers, maintaining or even increasing the exposure to illiquid assets is seen as a key element in meeting obligations.

This was also highlighted at a recent AREF/IPF seminar on the reform of the Local Government Pension Scheme (LGPS) – the existing 88 LGPS funds in England and Wales are being pooled into eight. While there are many factors at work that will define asset allocation for these schemes, greater scale would, in theory, enable schemes to take on more complex, illiquid assets. Indeed, one of the government’s stated objectives from the process is to increase the capacity to invest in infrastructure.

What are the implications of all this in practice? Some aspects are driving towards the need – or at least the perceived need – for more liquidity for some investors. We may well see the industry continuing to innovate new product structures to respond to this; many have highlighted the role of hybrid funds that blend listed and unlisted exposure to real estate. And even for investors that can tolerate illiquidity, there is a need to take a more nuanced view by analysing the liquidity of direct real estate portfolios. Not all properties are equally liquid, and we see a need for investors and their managers to analyse asset liquidity as another dimension of fund structure.

Perhaps most crucially, is communication. The investment-management industry needs to be clear on what can and cannot be delivered in terms of liquidity. Product structures can only go so far, and there are costs associated with providing liquidity. Many investors are content to view their real estate exposures as relatively illiquid, recognising the many benefits that the asset class can provide.