A framework to measure the liquidity of property assets can provide a more nuanced view for portfolio managers. Bill Page explains

Liquidity is a difficult concept to pin down. If you ask 10 different real estate investors what liquidity means to them you may well end up with 10 different answers. A simple working definition can be used that reflects the ability to buy and sell assets close to the price at which they are valued and within a certain time period (under three months would be doing well; under six would be acceptable).

Such loose definitions, however, only take investors so far. The incentive for managers, especially in retail funds, should be to manage the liquidity profile of assets across a portfolio while protecting against adverse fund outflows – not simply to be long in cash. What matters, therefore, is the practical application of liquidity concepts.

We have responded to this need and now assess the liquidity of individual direct real estate assets and aggregate this to the portfolio level. The results create a more nuanced view on the structural features of a fund, guiding both future transactions and asset management initiatives while protecting against adverse outflows. This also has a role as a market indicator by identifying performance and pricing differentials across liquidity profiles.

Why is this important? Experience from 2007-08 is still raw. During this period net fund flows fell from a positive £626m per month to a negative £491m per month within the space of a year, according to Investment Management Association (IMA) data. At the same time, real estate transaction volumes plummeted along with capital values. Many fund managers could not meet their sales targets and were forced to close to redemptions. This reinforces why managers of open-ended funds must manage liquidity thoughtfully through the cycle: there is a requirement to protect against the worst, but also to guide sensible portfolio construction.

Furthermore, with annual property income returns running at around 5% according to MSCI’s IPD Quarterly index, and base rates of 0.5%, it is evident that investors do not want high cash holdings to be the easy fix to protect against adverse outflows.

What can be done about it? A preferred approach was to combine theoretical observations (the IPF research archive has been very helpful in this regard) and experience. The first stage was to identify attributes which affect asset liquidity and then see how they could be measured.

Liquidity is not simply the length of time an asset takes to sell, or a transaction rate – a measure of the proportion of the market which is bought or sold over a given horizon, a measure familiar to investors in equities. These should be deemed attributes of liquidity – and ones that can be measured empirically – but they do not give the full picture. Meanwhile, there are other aspects of liquidity which can only be measured subjectively. This is no bad thing when liquidity itself can be described as a subjective concept. Such examples include confidence in a micro-location’s defensive properties or the ability of an asset to hold its value better than others at times of crisis: after all, most assets are sellable if the price is low enough. 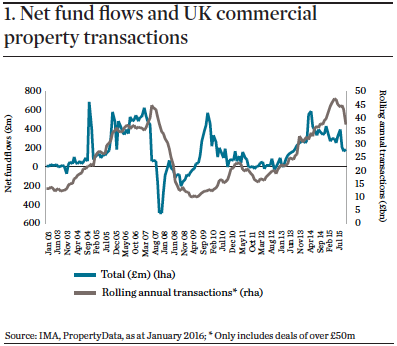 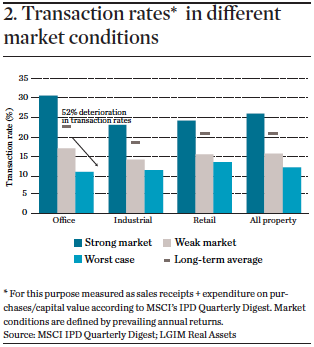 A further example of an attribute of liquidity that can be measured empirically is lot size. Previous research for the IPF shows, intuitively, that transaction rates differ between property segments but also differ within segments, depending on the lot size. As expected, larger lots tend to trade less frequently than smaller lots but this is not ubiquitous – evidence suggests the opposite can be true in central London offices and retail parks (factors such as overseas investment and management economies of scale could explain this). Such minutiae can be referenced by a framework.

More generally, this erosion in transaction rates provokes a need for prudence in defining liquidity parameters – assets classed as liquid should only be the most tradable, in any market condition. It also requires prudence with a liquidity target: the amount each fund should hold in liquid assets. A preferred target is 30%, which can be varied depending on each fund’s exposure to outflows. It reflects a challenging target based on potential outflows, referenced to history, with a further allowance for the deterioration in trading volumes, as discussed above.

Within the framework, three domains have been identified that affect liquidity: speed of transaction; asset cash flow; and distress – the latter accepts that what matters in distressed markets changes relative to average markets. Within each are different themes, as shown in figure 3.

Assets have every attribute scored and the framework will assign a score and liquidity rating for the asset accordingly. By weight, around 30% of the score is derived from speed, 40% to distress and 30% to cash flow. Crucially, 50% of the score is resultant from objective methods and 50% subjective. This is deemed to be an appropriate balance.

The result is a weighted liquidity score for each portfolio and a financial figure for the value of assets which are over or under the 30% target. Five grades of liquidity are defined, from ‘highly liquid’ to ‘illiquid’. Target liquidity for each fund was measured against assets deemed as having ‘good’ liquidity or better.

Before examining the results, a key question is whether a modelled approach works. The best test is the most undesirable one: another major liquidity crunch and economic collapse. The next best is to assess how well any framework ‘predicts’ the ability to sell assets at a time of stress. To determine this in the absence of a distressed market, transactions professionals were asked to judge a randomised sample of assets from one fund on the basis of how sellable they would be in a distressed market. Their order was compared to the liquidity score. This derived a convincing level of agreement between the framework score and the transactional view which gives confidence in the methodology going forward.

Figure 4 shows the liquidity stack for the balanced funds across LGIM Real Assets that were measured: 34% of aggregated portfolio value exhibited liquidity in the ‘good’ category or better, above the implied 30% target. However, this was not sufficiently overweight to be a comfortable position, especially when one considers that the 2% rated as highly liquid derived from one indirect holding: a disposal or shock to this would therefore reduce liquidity to only 2% above target.

It is important to emphasise that – in theory – having too much liquidity in a fund could hurt performance, and investor distribution, by increasing the proportion of lower-yielding assets (which are more likely to be liquid).

The framework is designed to inform, not dictate strategy. Strategic observations that can be made on such results include:

• The identification of assets which can be re-rated as more liquid through asset management initiatives, for instance by changing income length or covenant strength;
• Likewise, assets which need their liquidity position protected, and the initiatives which need to be prioritised to ensure it does not drop;
• The extent to which individual assets dominate (for instance, should one asset derive 100% of a fund’s ‘highly liquid’ score, this would represent concentration risk);
• Whether the fund has too much liquidity, which may hurt long-term performance and restrict distribution yield.

We’ve looked at why liquidity matters in the context of redemptions and prudent portfolio construction, but there are also implications for performance. Figure 5 shows the annualised total returns for the measured assets, based on recent liquidity scores, since 2008. At first glance, performance is counterintuitive: over time, outperformance from less liquid assets would be expected due to the higher yields offered. However, more liquid assets outperformed by 3.6% pa over eight years. Indeed, total return compensation for illiquidity risk was not achieved over any of the longer-term time horizons.

This relative outperformance emanated from insulation against outward yield shift at times of stress plus better rental growth. The higher income returns on many of the assets with lower liquidity were insufficient to offset capital value falls resulting from considerably greater yield expansion following the global financial crisis.

Useful observations can also be made on the value investors have placed on liquidity and how this has changed over time. Figure 6 uses the same assets and tracks yields historically based on current liquidity scores. This demonstrates that the value investors place on liquidity has changed; the market has been placing more value on liquidity than it once did: in 2007 yield spreads were minimal at 72 bps, indicating little compensation for liquidity risk. Post-crisis spreads widened to a high of 440bps but more recently spreads between very liquid assets and those exhibiting poor liquidity has receded to a more rational level, albeit with an above-average yield spread persisting. 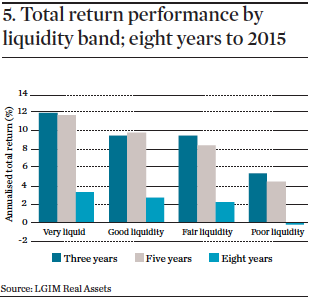 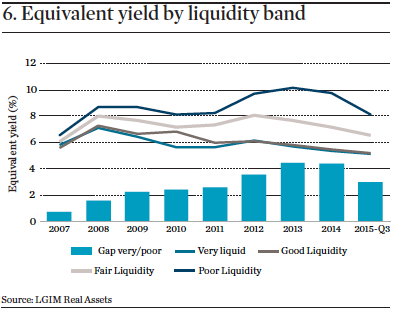 This has skewed relative performance, but this may change: assuming yield spreads between very liquid assets and those with poor liquidity mean revert, there remains potential for inward yield movement for less liquid assets as prices for the former category stabilise.

A framework to measure the liquidity of direct assets has been developed that incorporates objective and subjective concepts. It has enabled a more nuanced view on fund management without forcing fund managers’ hands. It can identify strategies to enable liquidity while avoiding cash drag. It provides a basis to examine liquidity in the context of returns and understand if the compensation for illiquidity is there. At an individual asset level the approach can aid understanding of the attributes which can be proactively managed to create liquidity.

Finally, it can be used as a market indicator, provoking questions over whether investors are paying too much for liquidity. Dislocations in yield levels could signify market mispricing, provoking a more opportunistic acquisition strategy.