‘Past performance is not a guide to future performance’ has become a very familiar phrase in the investment world, and increasingly to consumers via the small print of metro and newspaper ads. Despite this, investors often consider past performance and related metrics as important factors in investment and fund selection.

Investors are always going to prefer high returns to low returns in any given period, and if persistently high returns can be achieved, then even better. In this case, persistence means returns that are consistently better (or, on the other side, consistently worse) than those of comparable funds for periods longer than one year.

The subject of persistent outperformance (or ‘alpha’) in actively managed equity and bond funds has already been studied in depth. Ultimately, the consensus seems to be that it is very rare. Interestingly, the opposite applies to lower liquidity asset classes and to the real estate fund industry in particular. So, should past performance be an important influencing factor in investment and fund selection in non-listed real estate? To find out, we analysed a dataset of 162 core, open-ended funds in Europe that have formed part of the INREV Annual Index from 2001 to 2014.

The main evidence of performance ‘stickiness’ comes from looking at the quartile and half rankings.

The proportions of funds that maintain a quartile ranking is greater than 25%, and so cannot simply be random. Stickiness is strongest in the bottom quartile – between 30% and 50% of funds tend to stay here, while funds in the other three quartiles are more likely to move up and down. Bottom-quartile funds are also more likely to maintain their position over longer periods of time. One fund did so for seven consecutive years, significantly longer than the four years achieved by the longest running top-quartile performers.

It is no surprise that a top-quartile position is more difficult to sustain. After all, only a minority can outperform by definition. Just six funds managed to stay in the top quartile for a maximum duration of four years. However, if we look at top half versus bottom half performance, we find the opposite is true. Performance stickiness is more likely in funds in the top half, and this can endure for as long as 11 years.

This suggests that the focus should not be on funds that can achieve top-quartile performance but those that can maintain a top-half position. Looking at the three-year returns of the most common pathways adds further weight to this position, with consistently above-average performance trumping strong early returns that are unlikely to be sustained for the same length of time.

Pure top-half performers delivered the highest average annual return of 7.5%, 230bps above the unweighted average of 5.2%, whereas extreme performers only achieved 4.3%, 90bps under the average. Interestingly, pure bottom-half performers (2.6%) did better than those that flip flopped (1.9%), highlighting the importance of consistency when it comes to getting the best possible returns.

“For fund managers, being able to demonstrate a track record of repeated outperformance can be an important competitive differentiator”

It was also possible to identify a number other factors associated with consistent top-half performers. Funds within the lower gearing category (not more than 40%) typically performed better, as did those with a gross asset value (GAV) of under €500m. The dispersion of returns among multi-country funds is less than the dispersion among funds that target single countries. Among single country funds, those in the UK and Netherlands have a wider range of returns than those in Germany, where none of the funds were extreme performers. This category of performers was also absent among Luxembourg-based funds and funds launched after 2007. 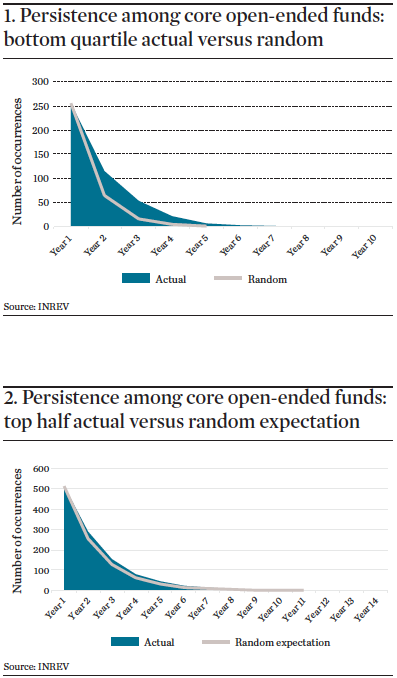 One factor that does not appear to make a difference is sector. Although there are some differences between multi and single-sector funds at a country level, once averaged out these were of no statistical significance.

Clearly, this single exploratory study cannot provide all the answers. There are plenty more factors that merit investigation. Is persistent performance unique to Europe? Do the patterns observed in open-ended funds apply to closed-ended, value-added or opportunity funds? What are the risk factors and therefore the steps that managers could take to further extend top-half performance?

Nonetheless, it is possible to conclude from our initial research that there is a meaningful degree of performance persistence, and that the excess return associated with top-half performance is worth significant attention. As per the mantra quoted at the start, a good track record is no guarantee of success, but it is a relevant consideration for investors when selecting fund managers.

The evidence strengthens the argument that active management can help deliver above-average returns. For fund managers, being able to demonstrate a track record of repeated outperformance can be an important competitive differentiator.

It may even be possible to exploit persistent performance by using a momentum trading strategy, but the implementation challenges associated with this course of action are daunting. Perhaps the most significant of these is liquidity, which remains tricky given the non-listed nature of the funds. Even if this issue could be overcome, increasing investment in persistent performance is tricky; all persistence reduces to a very low number, and can potentially reduce to zero.

This brings us to an interesting conclusion: while track record is important, sticking to a top-quartile performing fund for a prolonged period of time can result in sub-par returns. Therefore, it could be better for investors to focus on funds that are consistently solid, rather than spectacular, top-half performers.

Henri Vuong is director of research and market information at INREV