Comparing the inflationary world of the 1970s with today’s lower-for-longer environment can help explain why investors continue to bid up property, writes David Rees

Recent interest rate cuts and further quantative easing from central banks including those in Australia, Japan, the euro-zone and the UK, suggest low or negative nominal and real interest rates are here to stay.

Negative real rates are not a new phenomenon. They have been with us before – for example, during the First and Second World Wars, in the 1930s and, most memorably in the 1970s. Typically, however, previous episodes of negative real interest rates have been associated with high inflation.

During the 1970s, global interest rates were high – but inflation was often higher. At that time, commercial real estate provided a hedge against high levels of inflation that were driving real interest rates into negative territory.  Through this decade, capital values of real estate along with other hard assets, such as gold, rose with consumer prices at a time when bonds and cash in the bank were losing real value and stock-market performance was lacklustre.

“The current environment is favourable to investing in high-yield assets such as commercial real estate. If there is an outbreak of inflation, the hedging characteristics of real estate will re-emerge”

We learned in the 1970s that real estate is, a good hedge against inflation. But is it a good hedge against deflation, and what are the implications of a low-growth/low-inflation world? Does the outcome for commercial real estate investment differ in the two negative-interest-rate scenarios, one with high inflation and high interest rates, the other with low inflation and low nominal rates? 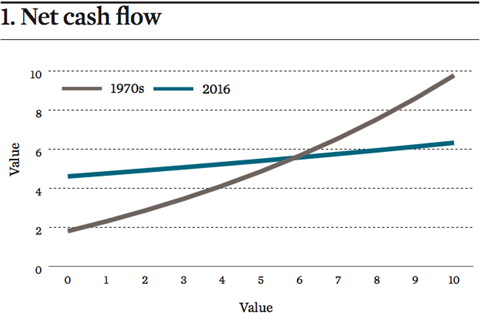 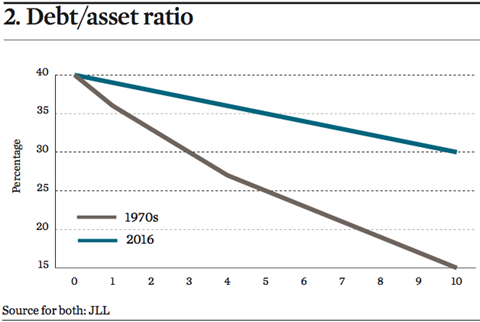 Consider as an exercise an asset worth $100m (€89m) and offering a current income yield of 5%. Suppose we purchase this asset with a 60% equity stake, the balance covered by an interest-only fixed-term loan at a fixed interest rate. The holding period is 10 years and rental income rises with inflation.

Let us compare a stylised scenario from the 1970s with the current market, assuming that in both cases the real cost of debt is negative (assume -2%).

Figure 1 shows the net cash flow (rental income net of interest payments on the debt). In the 2016 scenario, cash payments are higher for the first six years of the investment, despite that fact that in the 1970s rapid inflation caused rents to rise quickly. So for purchasers with cash-flow constraints, such as first-home buyers, the current market is more accessible than in the 1970s when high nominal interest rates meant that the burden of debt service payments was front loaded.

Figure 2 shows the debt/asset ratio. The initial ratio, 40%, is identical in both cases. But the ratio declines quicker in the 1970s as the real value of the debt erodes due to higher inflation.

Investment returns differ as well. In the 1970s, the real equity IRR was 7.7% per annum, while in 2016 it is 9.6%. The higher real IRR reflects that in the current market the up-front cash flow is stronger when compared with the 1970s. No matter what the level of inflation, money now is always worth more than in the future.

Reflecting this higher return, therefore, investors will be willing to bid up today’s real asset values more aggressively than in the 1970s. As a further inducement, the stronger free cash flow in the early years of the investment is an encouragement to take on higher levels of debt.

However, there is a trade-off. In the 2016 scenario financial leverage remains higher for longer. So the financial risk is greater over the life of the asset. As the real value of debt remains higher, the rollover risk when the debt matures is correspondingly greater.

The scenarios set out help to explain why real estate continues to attract capital – despite some in the market calling the top of the cycle.

The bottom line from this direct comparison is that the current negative real interest rate market offers easy access to investors as well as attractive returns. In the 1970s, investors could leverage themselves up, confident that a higher rate of inflation would do most of the work of paying down the debt. Today’s investors have no such comforts.

The downside risk to the current market environment is an external shock that causes inflation to spike. In this scenario, interest rates and the cost of debt may rise rapidly.  While higher inflation will emerge as rising asset values over time, in the short term the rising cost of debt service payments may put a squeeze on cash flows. The risks will rise if low interest rates and low inflation encourage investors to believe that the current situation is permanent, and debt levels rise accordingly, while bank lending criteria are relaxed.

In summary, the current environment is favourable to investing in high-yield assets such as commercial real estate. If there is an outbreak of inflation, the hedging characteristics of real estate will re-emerge. The risk lies in the process of adjustment from the current low/low world. Investors would be well advised to consider scenarios of a return to higher rates of inflation and higher interest rates.

David Rees is regional director and head of research, Australia at JLL