UK real estate investors have shifted their bias from offices to retail over the past 20 years, but lenders remain equally weighted. Malcolm Frodsham and Angela Sheahan investigate

The Bank of England recently consulted over the creation of a databank of commercial real estate loans (see page 8). Such a database will reveal the exposure of lenders to different property types, the margins and subsequent impairments.

In the mid-1980s such a database was created for investors by Investment Property Databank (IPD), and for the first time investors were able to compare their portfolio structure to their peers and observe the impact of asset allocation on their returns. The results revealed stronger performance from retail property relative to offices, and over the subsequent 20 years investor portfolios were shifted from approximately 50 offices, 33 retail to 50 retail, 33 offices.

According to the De Montfort University Commercial Property Lending Report, lenders have an equal exposure to offices and retail. Do the return characteristics from real estate loans support such a weighting?

It will take a while for a new database to provide a sufficiently long time series to test the impact of asset allocation on returns. So to inform the debate, we employ an alternative approach to assess the default characteristics of commercial mortgages by the type of property used as security.

In order to investigate the relationship between loan returns and the collateral provided as security, our analysis simulates the default levels for real estate debt based on interest rates, fees and margins and the link between defaults and the underlying direct market.

Survey evidence of loan-to-value (LTV) ratios, interest coverage ratios (ICRs), lending margins and fee levels are available annually in the De Montfort survey back to 1999. However, there is no source for default rates or losses on commercial property loans. We use data from the private equity market to simulate the likely default history.

We define ‘default’ as the event that collateral value is below the value of the loan at the end of the loan term or that the income receivable from the collateral is insufficient to pay the interest over the term of the loan. We have excluded other types of default, such as poor documentation, a significant factor referenced in previous cycles for bank losses. We have also ignored pre-payment risk.

We base our simulation of debt returns on the market dynamics indicated by the IPD equity investment returns series for assets of differing types.

Losses are driven by four factors: the size of the loan, the impairment costs and the path of collateral values and incomes. 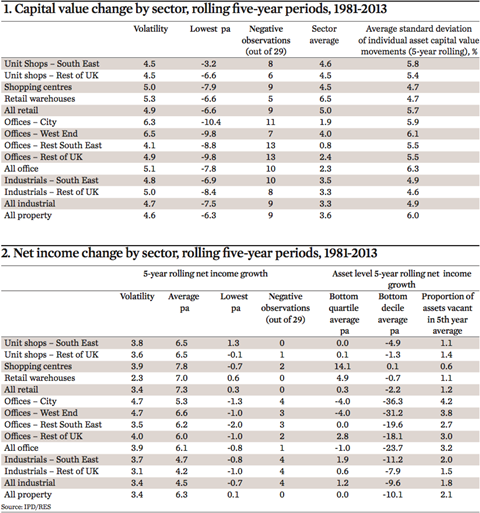 • Loan size. The loan size refers to both the amount of the loan, expressed as a proportion of the collateral value (LTV) and the interest servicing requirement, expressed as the proportion of interest covered by the rent receivable on the asset (ICR).
• Impairment costs. Default is triggered in the simulation when the value of the collateral is below that of the loan principal at the end of the five-year term. A lender will incur costs in foreclosing and disposing of the asset. Impairment costs of 20 of the recovery value have been assumed at default.
• Collateral capital values. Capital trends vary by sector and region. The office segments have recorded the highest volatility of capital values when measured over rolling five-year periods, the lowest average growth and the greatest falls in value.

Individual assets will not automatically track the market average trend in capital values. To compute the capital loss, the probability of the full range of asset value changes is multiplied by any associated deficit against the loan value, plus the impairment assumption. The probability in the tail of the distribution is increased by 50 to adjust for non-normality.
• Collateral income

Changes in collateral income are determined by the change in market rental values and the lease terms in place. Drilling down by sector reveals some falls in income over some periods with retail the more defensive sector.

At the asset level many assets see income falls. Table 2 shows the net income fall for the bottom 25 and bottom 10 of assets plus the proportion of assets vacant in the fifth year. The information shows that historically, there has been greater downside risk in the office sector, with average income falls of more than 36.3 on 10 of City offices over five-year periods from 1981 to 2013.

To compute the loss, the probability of the full range of asset income changes is multiplied by any associated deficit against the loan value, plus an impairment assumption.

The simulation is calculating debt return for individual hypothetical loans, secured by a single property based on an empirical distribution of asset values and incomes, plus further assumptions based on survey evidence of impairment costs, margins and fees. Specifically:
• One hypothetical five-year loan was ‘originated’ each year from 1984 to 2009 for each loan size and collateral type.
• We apply the evidence on LTVs, ICRs, fees and margins for senior lending reported by the De Montfort survey from 1999 to 2013 and by Maxted (1994) for 1984, 1987 and 1989.
• Default is triggered in the simulation when the value of the collateral is below that of the loan principal at the end of the five-year term.
• An impairment charge of 20 of the recovery value has been assumed at default.
• The simulation assumes a binary outcome at the end of the term of the loan: repayment or default. The additional losses due to forbearance are not included in the simulation.
• The IPD Annual Capital Growth and Rent Passing Growth indices by sector have been used as the measure of collateral value and income movements over rolling five-year periods from 1984 to 2013.

Results: do margins justify office exposure?
For every loan vintage, there is a probability of at least some loans defaulting, even though the market average change in capital values is not sufficient to erode all of the borrowers’ equity. This is due to the range in asset-value changes around the average. 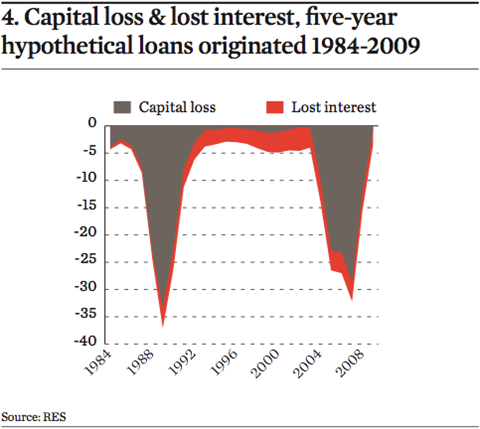 The capital loss and lost interest estimates by loan vintage are shown in figure 4. In the years when market values subsequently fell precipitously – 1988 to 1990, and 2005 to 2007 – the probability of capital loss rises sharply.

Maxted (1994) reported maximum LTVs of 90 in 1989, compared with 75 in 2007. After adding an additional 20 of loan principal for the additional costs incurred in the foreclosure process, the capital losses incurred on defaulting loans is estimated to peak at nearly 40 on loans originated in 1989. The average loss in the case of default is estimated at 30.3 of original loan balance.

To compute a simple measure of total return, the lost interest and capital loss are deducted from fees and interest. The minimum (nominal) return is on loans originated in 2006-07 at 0.8.

The wide spread in income trends within the office sectors with average income falls of over 42 for 10 of assets in each origination year results in an income shortfall that is highest on Central London offices.

Margins should compensate investors for the difference in the risk of capital loss and income loss by type of collateral.

The reported spreads from the De Montfort survey vary minimally across the sectors.

The combination of higher capital loss and interest shortfalls on offices, particularly in the City, generates the lowest simulated debt return, with average reported margins over the analysis period insufficient to cover estimated losses.

The variation in the change in individual asset collateral values and incomes around the market average is determined by factors that are specific to each individual asset, such as tenant default and the timing of lease breaks and expiries. There is a reduction in this idiosyncratic risk as more assets or units are included in the collateral due to the natural diversification benefit from multiple exposures to specific risks. The model inputs are sourced from actual assets held by investors and so the number of leases will accord closely to industry norms for the same property types. To the extent that actual loans may be secured on multiple assets the default rate on such loans would be expected to be lower than simulated in our model.

To generate an appropriate risk-adjusted return on real estate lending, achieved income should be above-average losses. Premium margins should be achieved by lenders for loans with greater risk of borrower default.

Without a database of real loans, it is not possible to directly test whether a direct relationship exists between the margins achieved by lenders and subsequent losses. This lack of transparency in the debt market is likely to mask pockets of supernormal returns and/or poor risk-adjusted returns.

To provide some visibility on the relationship between risk and return, we use the wealth of evidence regarding trends in real estate asset values and incomes to simulate losses for loans through two real estate cycles combined with survey evidence on margins and fees.

We estimate that losses due to borrower default for bullet loans secured by a single commercial real estate asset would have been above reported margins for loans originated between both 1987-90 and 2004-08.

The weakest returns are found on hypothetical loans advanced on office assets. Capital losses are higher on such loans due to a combination of weaker office capital growth trends, a higher degree of idiosyncratic risk on office assets and a higher recorded average LTV. The De Montfort survey shows no evidence of a higher margin on office investments to compensate.