The City That Never Sleeps went into an induced coma in 2020. Some tenants and investors are now preparing for New York City to reawaken. Venessa Drucker reports

As New York City’s employers mobilise to reopen offices, they are keeping an eye on key developments. Important factors are COVID-19 case numbers, vaccination rates, transportation and occupancy levels. As of August, hospitalisations remained under control and the office sector trajectory appeared positive. But the wild card of Delta or newer variants could quickly change the outlook. “If Delta infections reach 5%, no one will go back,” warns Nadir Settles, managing director and New York office regional head at Nuveen.

In July 2020, footfall for those entering offices bottomed out at around 10% (as measured by office swipe Necards), and is now approaching 25%, according to Lee Menifee, managing director and head of Americas investment research at PGIM. “It’s gradually increasing in fits and starts, but nowhere near the high mark,” he notes.

The same applies to public transport, with subway ridership and the local commuter trains, Long Island Rail Road and Metro North 40% below pre-pandemic levels. Yet riders are trickling back. Adam Frazier, vice-president and head of New York leasing at Oxford Properties Group, himself commutes from Long Island. “The parking lots and trains were empty before. Now they are full,” he says.

Dean Shapiro, head of US development, describes the impact of the COVID-19 lockdowns on Oxford Properties’s development at Hudson Yards: “Lockdowns significantly affected occupancy (but not vacancy levels). At one time, occupancy levels were approximately 8%, but recently have reached 20-30%, with further increases expected over the short term.” 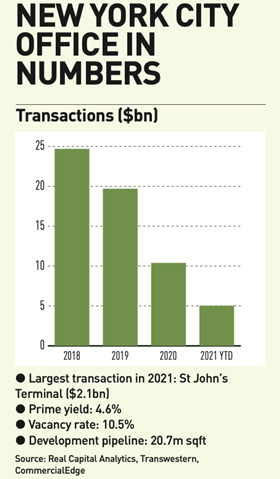 Occupiers who put space on the market, believing they would not need it, are now taking it off again. Nicole LaRusso, senior director of research and analytics at CBRE, says they are now planning “to bring back most employees, most of the time”. Meanwhile, staff may spend less time on company premises, LaRusso says. Most people who worked in-house full time before COVID-19 will do so again, “but less so”, she suggests. While the average worker was spending 4.2 days per week at the office before March 2020, they will now probably reduce that time to 3.2 days.

CBRE analysis shows that most employees will choose Tuesday through Thursday for their office days, to provide an extended weekend. If so, firms will need to accommodate that peak mid-week time period. If people are coming in to facilitate collaboration, more meeting space will be needed. In other words, companies will not be able to reduce their footprints, and there will not be a proportionate decline in office areas. “The way we use space will shift. People will need to sit together in a conference room,” LaRusso predicts.

It has been a dramatic story for office occupancy: prior to COVID-19, tenant demand had reached an all-time high. In mid-March 2020, all office buildings emptied out, except for essential workers and building staff. Tenant requirements evaporated. LaRusso watched CBRE’s list of tenants seeking space shrink from 35 to 17.

“It was interesting that they didn’t cut space right away,” she recalls. “In prior recessions, like after 9/11, we’d seen them give up floors. It didn’t happen this time. Instead, the market froze.” No one was using the space in 2020, nor had they any idea what would happen in three or four months. Then, after that original reaction, space began to return to the market in the form of sublets.

LaRusso describes the “double whammy” of space put on the market, along with no demand from new tenants. As a result, space built up, to reach an availability rate of 18.6% – significantly higher than the range of 10% to 12% that existed after the global financial crisis and before the onset of COVID-19.

The recent downturn has not been as severe as the one that followed the global financial crisis, a plunge that took five and a half years to recover from. Rents only dropped between pre-COVID days and June 2021, although “many expected much more”, notes Settles. From March to September 2020, sublease space grew exponentially. However, since then, 84%, or 2.1m sqft, of that space was eventually taken back off the market. “The lion’s share was withdrawn,” says Settles.

Manhattan’s leasing activity began to pick up steam during the second quarter of 2021, when it posted the highest quarterly totals since COVID-19 struck. This year, Q2 leasing increased by 14.1% over Q1, according to Cushman & Wakefield research. Yet that boost still represented a pale shadow of former activity, lagging mid-year 2020 by 29.3%. “Class-A buildings, which are more resilient, saw stronger leasing and absorption, but vacancies are still up significantly,” says David Bitner, head of Americas capital market research at Cushman & Wakefield.

Settles believes there is a covert subtext to this activity. “Leaders of companies are saying one thing, but doing another”, he says; they are denying the need for more space, but “gobbling it up”. Some companies are beefing up before there is greater market clarity, to position themselves for a more competitive world when offices reopen in earnest. The physical office has become part of their value proposition and their offering.

Tenants and investors position for recovery

Changes are afoot among the main industries in the leasing market. In the past, finance was always a driving sector in Manhattan. Over the past 20 years, the technology and media slice of the pie has expanded. Companies like Netflix and Instagram have been hiring vigorously. Determined to snap up the best space, they have driven rents higher. While there was no attrition in finance, the technology, advertising, media and information (TAMI) industries were growing faster. As of the end of Q2 this year, financial services accounted for 35.5% of new lease activity, followed by the TAMI group at 19.5%.

Technology companies are still looking to expand. Amazon hit the headlines in 2019 when it cancelled plans to set up part of its North American headquarters for 25,000 employees in Long Island City in Queens. But Menifee points to what is not widely reported – the company is still adding several thousand employees across New York.

Since the start of 2021, Oxford Properties has signed 26 new leases for spaces under construction, Frazier reports. Demand has been high on the TAMI side over the past five years, representing 40% of new leases, with financial services only accounting for 23%.

As for other industries, financial services continue to pressure employees to return to offices: JPMorgan Chase was one of the first to insist they return; Goldman Sachs brought workers back in June; Citigroup is requiring people to come back and be vaccinated by September 13; and Morgan Stanley expected its ranks at their desks by Labor Day.

Some firms, like UBS and BNP Paribas, have been more flexible about hybrid models. “In general, banks which utilise close teamwork and ‘higher touch’ approaches want staff back,” Bitner observes. “Some of the more lenient firms may be those that are making less money,” he adds, wryly.

Various industries are “flying under the radar” in their messaging to employees, Menifee says. Like financial services, real estate brokers are pressuring employees to resume attendance at former work locations. “It’s hard to map the huge differences in the messaging among tenants, but that should be refined over the next few months,” he says.

Life sciences is growing in the city, spurring demand for space. The New York City Economic Development Corporation has committed $500m to the sector over the next 10 years, and the National Institute of Health is heavily funding local research programmes. On 12 March, Taconic Partners and Nuveen capitalised 125 West End Avenue with $625m to be a state-of-the-art life-sciences hub.

Currently, demand for space outstrips supply. “If you build properly, they will come,” Settles predicts.  He hears “broker chatter” that large pharmaceutical companies like J&J, Merck or Bristol Myers might even one day consider relocating headquarters from nearby New Jersey.

It has been a wrenching time for sales, too. Throughout 2020, NYC investment volume collapsed by more than 50% to its lowest level since 2010. However, it rebounded late in the year, with the fourth quarter up 24% on Q3. The office investment market has remained sluggish, in part because owners have not been ready to offer discounts. While hotel owners might have been anxious about the revival of business, office owners still appear optimistic about their higher-quality assets. “No one has wanted to do fire sales,” says LaRusso.

The COVID-19 period has witnessed a batch of landmark transactions. In November 2020, SL Green agreed to sell 410 Tenth Avenue for $952.5m, anchored by Amazon and First Republic Bank. Earlier that year, in March, Amazon spent $978m to acquire the Lord & Taylor building at 424 Fifth Avenue from WeWork. “Both trades demonstrate the resilience of NYC and the willingness by buyers to pay for core products,” Settles says.

In Q1 of 2021, however, sales volumes plunged by 90% year over year, versus $3.8bn in the first quarter of 2020. The largest transaction in the quarter was for $275m by Brookfield Asset Management. The general pulse is finally picking up: DivcoWest bought 540 Madison Avenue for $310m in July, and Boston Properties agreed to acquire 360 Park Avenue South for $300m. The following month, ViacomCBS reached a deal for $760m to sell its Black Rock tower. 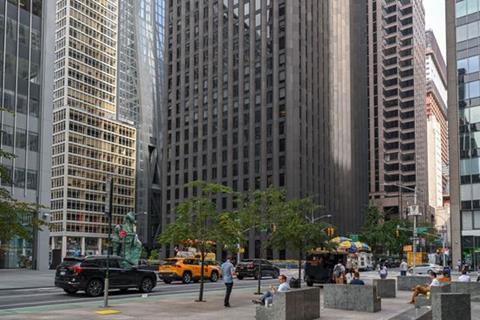 Gregg Walker, head of business development at DivcoWest, explains how 540 Madison has just been given a tenant amenity centre. Empty portions of the roof are being fitted for concierge services, coffee, restaurant and meeting areas, and workspaces including outdoor firepits. “We also purchased 325 Hudson three months ago, and feel lucky to have it. We love the location, with buildings close to retail and residential, Google and Disney offices nearby.”

Down the road, Hudson Yards, a 28-acre development in the Chelsea neighbourhood, sits on a platform built over the storage yard for Long Island Rail Road trains. Structures include not only offices, but also residential buildings, a hotel and a cultural centre.

Shapiro is optimistic about the future of the complex: “Hudson Yards will experience the benefit of time. It will continue to establish itself as an accepted new neighbourhood. That, in addition to the unique environment, high-quality modern space, and excellent access, will continue to propel it to new heights.”

As investors look ahead to the future, development deals are also emerging. In late July, L&L Holding Company and Columbia Property Trust inked a $1.25bn construction loan to redevelop Terminal Warehouse in West Chelsea. “It validates that people are seeing light at the end of the tunnel,” Walker says. As people return to work, landlords are gearing up to take advantage.

Assuming economic growth and job creation revive over the next few years, they will translate into organic office occupancy. New York has demonstrated a repeated history of industry innovation. After 9/11, the global financial crisis and Hurricane Sandy, many jobs in finance were lost. But advertising, media and technology moved in, helping to rebalance the economy. Over the long term, the wealth of talent in the city will survive, attracting employers, even as occupied offices become more appealing to investors.