2
London offices: Down, but not out
Offices

London offices: Down, but not out

Office occupancy in London has been hit hard by the pandemic, says Maha Khan Phillips. But major investors continue to bet on a recovery 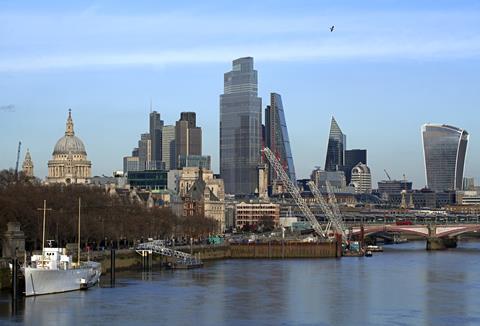 A time to buy? Prime office yields in London are still higher than in Paris and Berlin

In the UK, London-based workers are the least happy about returning to the office full time, a survey by insurance company LifeSearch has found, and most employees favour a hybrid model of remote and office working.

The city has also been singled out by real-estate intelligence firm Green Street as the European office market most affected by working-from-home transitions.

None of this is particularly surprising. London has long been good at attracting people to live and work in the city, despite a congested and, at times, creaky public-transport network. People come for employment opportunities and the other attractions, but certainly not for the commuter experience.

“In London, employees are more cautious about going back to work, and are still working from home. Employers have a big challenge in bringing employees back, so downsizing office space is much more at the forefront of the market,” says Virginie Wallut, director of real estate research and sustainable investment at La Française Real Estate Managers.

Most industry participants expect London offices to embrace hybrid working models. But how much of a reduction of office stock that results in remains to be seen, which in turn makes it harder for investors to make strategic plays.

Jose Luis Pellicer, head of strategy and research at M&G Real Estate, says: “The relationship between the number of days worked from home and the need for office space is not linear. The amount of square metres you need as a business is not linear. If everyone works from home one day a week, you’ll still need your space. It’s when the numbers working from home become three or four days a week that you need less space.”

The real estate services firm Avison Young says that take up across central London rose 1.9m sqft in Q2 2021 – 49% above the previous quarter and more than double the activity seen for the final quarter of 2020. Vacancies are still lagging, however, rising from 7.5% in Q1 to 7.9% in Q2, and are now more than 2.6 percentage points above the quarterly 10-year average.

Lee Elliot, global head of occupier research at Knight Frank, estimates that the London market is at 25% or below typical occupancy. “That’s not dissimilar to what we are seeing around the world. If we look at eight global markets, seven of the eight have occupancy levels below 50% of typical occupancy,” he says.

And London offices continue to change hands, albeit at a lower pace than normal. There have been some sizeable bets, not least Brookfield Asset Management’s acquisition of 30 Fenchurch Street for £625m (€734m) and Union Investment’s purchase of BT’s new headquarters for €500m. Madison International also recently acquired a stake in the 37-storey Salesforce Tower at 110 Bishopsgate.

A total of £1.9bn was invested across 28 transactions in central London offices in Q1 2021, a quarter-on-quarter decline of 70%, and 58% down on the 10-year average for a first quarter, according to La Française. However, those numbers are slowly changing, with Q2 being the most active quarter since the onset of the pandemic in terms of signed deals, according to an Avison Young report.

“Q2 has seen improvement in investment volumes,” says Elliot. “It hasn’t been around the level of what we normally expect in central London, but the better-quality buildings are highly sought after. The appetite for these buildings has never really diminished during the course of the pandemic, and these buildings are being transacted at a sharp yield.”

Notably, most transactions have involved grade-A space. As in other European markets, London office transactions are split between premium buildings and older stock.

Alex Colpaert, head of offices research at JLL, says investors are betting on a recovery in the prime end of the spectrum. “Changing trends in the future of work has meant that corporates are more likely to opt for best-in-class space to keep their employees motivated, use it to spark creativity and to optimise it for collaboration,” he says. “This means that the demand for higher-quality, amenity-rich and more sustainable buildings is being accelerated, whereas yields are widening for less-efficient and less-desirable product.”

Colpaert points out that London continues to offer attractive yields compared with other gateway markets. Prime office yields in London’s West End stand at 3.5%, compared with equivalent assets in Paris or Berlin, which would achieve a 2.5% yield.

Premium buildings include those with a focus on sustainability and wellness, and those that put employee satisfaction at the heart of their models. Justin Curlow, global head of research and strategy at AXA IM Alts,  says: “The leasing activity decisions we have seen in the last few weeks have started to take these new hybrid ways of working into account, with more flexible, agile spaces which allow everything from small meetings to town hall gatherings, with bike storage, showers, good food and beverages in demand. Occupiers are realising what they need from the office and realising there’s not enough supply.”

In July, AXA IM Alts announced that it had agreed a new lease at 22 Bishopsgate, its flagship London development, letting its 25,376sqft 42nd floor to insurer Fidelis. And in August, AXA leased 65,000sqft to international law firm Skadden, leaving the building 60% let.

The building has a focus on people and wellbeing, according to AXA, which says it will benefit from 120,000sqft of shared space and amenities, including ‘The Market’, a food hub, ‘The Exchange’, a wellbeing space, and the Active Commuter Park with space for 1,700 bikes. It will offer a destination restaurant, spa, curated art walk, climbing wall, and more. The building is also using smart data to collect over 1m data points per day on temperature, light, water, and the flow of people. It will use a touchless entry system including opt-in facial scanners, and has an app for usage.

Curlow says: “Health and wellness has always been part of the strategy we had for 22 Bishopsgate. I think heightened levels of service offerings really differentiate those buildings which are attractive to occupiers and those which are outdated.”

According to Knight Frank, 40% of the capital chasing London assets this year will be targeting stock that can align with investors’ own ESG targets. London has the highest number of green-rated buildings in the world.

However, the future pipeline of premium buildings is limited, says Shabab Qadar, head of London research at Knight Frank. “The future pipeline across central London is quite modest. There’s a peak in activity this year and then it tapers off substantially, and we think there is acute under-supply of best-in-class buildings, at a time when structured demand for best-in-class buildings is increasing,” he says.

This will lead to new opportunities, according to Curlow. “There will be opportunities across the spectrum. From a core investment perspective, there is enough stock and new stock for investors. Value-add investors are going to find interesting repurposing or retrofitting opportunities, taking space that is not fit for purpose in a post-COVID world and trying to retrofit to make it attractive to the specifications that occupiers are looking for,” he suggests.

And this is all while “yields in London are higher than Paris and Germany because of Brexit”, Wallut points out. “And that hasn’t happened for a very long time. So there’s real opportunity in the London market.”

M&G made its second London office acquisition earlier this year, for a European real estate mandate awarded by an Asian investor. It purchased the 73,000sqft Saffron House in Farringdon for £78.3m as part of the mandate’s value-add strategy. The deal follows the purchase of Fleet Place House, another office building in the same area of the City of London, for £112m in October 2020.

Pellicer says that the firm’s approach is to future-proof its portfolio. “Our consideration depends on the amount of offices each fund has,” he says. “There are funds that have a big allocation to offices, and some that have smaller allocations. For those with bigger allocations, our mantra is to de-risk the portfolio and make it future proof.

He is optimistic about the future. “If you look at the level of vacancy in London and Paris, it’s not higher than it was in 2009. New take up is not that different to 2010. I do envisage business expansion in the next five years with the recovery, and tenants, who themselves have ESG objectives, will start looking at the right type of office space so that they can show their own commitment to a better world. I would envisage a lot of office relocation. If an investor owns these types of future-proofed assets, you are in a good place.” 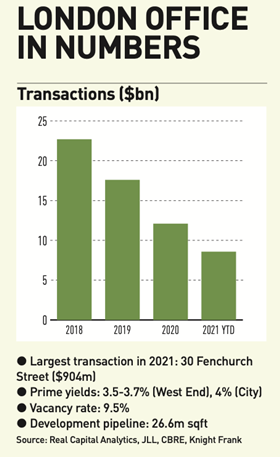 Andrew Burrell, chief property economist at Capital Dynamics, anticipates a reduction in demand of about 10% over the coming years, but says this will not happen overnight. “The adjustment in space will take some years, given the inertia in leases and companies wishing to see how the hybrid working evolves,” he says. “But it is likely that investors will initially be cautious about offices, given the weaker fundamentals, though given the importance of the sector, it will remain a big component of investment.”

Burrell adds: “The general feeling is that investors went from traditional sectors into alternatives and non-traditional as much as possible… changing sentiment towards offices will hold back some money.”

However, industry participants also say that, with the pandemic still ongoing, a lot of occupiers are still making decisions about their future needs. Elliot believes that the trends and themes coming into play now will take some time to become clear. “I think this will play out over the next three to five years, as opposed to the next three to five months.”