Since the beginning of the year, inflation readings and inflation expectations have increased in many countries as restrictions are gradually eased. This particularly applies to the US where inflation in June rose to 5.4%. US inflation expectations over a 10-year horizon, as implied by the TIPS (Treasury Inflation-Protected Security) market, recently hit a level of about 2.4%, following a previous high of 2.6% in mid-May.

The two main components of real estate yields are the respective real risk-free rate and a risk premium for owning real estate. Historic data in academic research has found this risk premium to be about 350bps.

In addition, recent academic work by Chambers, Spaenjers and Steiner (2021), as well as by Schmelzing (2020), implies a long-term UK commercial real estate risk premium for the 1901-83 period of 334-374bps over the real interest rate. Figure 1 shows the result of our own calculations.

Rising inflation levels in an economy will push up all prices, including rents, net operating income  and capital values. As a result, real estate yields are unaffected by inflation and have remained fairly stable. This becomes most apparent by looking back several decades, including periods of double-digit inflation levels.

For this purpose, we have looked at office yields, as well as nominal and real interest rates in major global gateway cities such as London, Paris, Frankfurt, New York and Sydney. These have historically provided high levels of liquidity and transparency, and office-yield time-series are available back to the early 1980s. 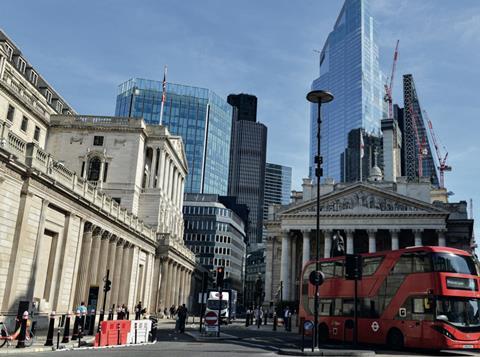 The ‘real’ nature of real estate yields is underscored by the significant reverse yield gap to nominal Gilt yields in the 1980s and 1990s – a period with particularly high inflation readings. Real Gilt yields, in contrast, remained below London’s prime office yield for most of the 40-year period, implying a positive spread of 367bps, on average. The data for Paris and Frankfurt shows a similar picture.

Figure 5 provides an overview of current office yield spreads over respective real risk-free rates for all five global markets. Overall, our data and calculations show an average long-term spread of about 340bps over real government bond yields across the five cities. Current real yield spreads of about 510bps, on average, are significantly wider than this long-term average.

In conclusion, real government bond yields are a key benchmark for real estate yields, particularly during elevated inflation levels. Currently, some market participants are concerned about rising real bond yields as a response to potential tapering of asset purchases by central banks as the world’s economies emerge from the pandemic.

Megan Walters is global head of research; Clemens Ernst is senior associate, and Gizem Bartu is an analyst at Allianz Real Estate