8
Future of offices: The flex effect on income
Offices

Future of offices: The flex effect on income

By Will Robson November / December 2019 (Magazine)

A more flexible office market has implications for income returns, writes Will Robson

No conversation about office markets seems to have escaped at least a passing reference to WeWork in recent years. There have been endless debates about its breakneck expansion, the nosebleed-territory valuations (until recently), but more fundamentally the sustainability of its underlying business model – matching long-lease liabilities with much shorter-term income streams.

While there might be endless debate about WeWork and the merits of flexible-space business models, there is less controversy about the demand for increased flexibility in office arrangements.

MSCI’s 2019 Lease Events Review examines the broader office markets to understand trends in UK leasing structures over the past 20 years. So what questions is the market asking about office markets? Do we see a general trend toward shorter leases? In what ways are tenants securing more flexibility in those leases? What has typically happened when those leases come to an end? How ‘sticky’ are tenants and what does that mean for the security of income for property owners?

Leases are getting shorter; the average length of an office lease in the UK has shortened by nearly a year-and-a-half in the past 15 years, from 7.6 years in 2002 to 6.2 years in June 2019. That is a fall of over 18%, but only a little more than one percentage point per year. It does not feel too dramatic against the current hype around flexible working and coworking.

However, if we weight the leases by their rental income so that larger, higher-value units have a greater impact, we see a somewhat different picture. First, this weighted lease length is longer by between three and five years over the whole time period, indicating that tenants looking for larger and/or more expensive space tended to look for longer leases, perhaps requiring greater security of tenure.

Looking at the trend in this measure of lease length (figure 1), we see a more dramatic, three-year fall in lease length from 13.1 years as at 2002 to 10.2 years by July 2019. It seems that while occupiers of larger/more expensive units tended to seek longer leases, they were doing so to a much lesser extent towards the end of the study period.

Over the past 15 years an increasing proportion of newly signed leases have incorporated break clauses. As an alternative to reducing commitment through lease length, these clauses allow tenants to exit their leases early if circumstances dictate, but retain the security of longer tenure if they need it.

Overall we have seen the proportion of office leases with such options increase from 26% in 2002 to nearly 44% in 2019. Over the past 15 years break clauses have been most prevalent in leases between six years and 10 years long. There was a clear upward trend in all the lease length brackets up to 15 years, but less so in the longer leases. Longer leases tended to have proportionally fewer break clauses but in the years after the 2008 financial crisis there was a spike. This may have been down to tenants locking in lower rents in a depressed market but looking to add a dimension of flexibility. In general, though, it seems that those looking for long leases were doing so primarily for security of tenure and saw less need for flexibility.

Although, on average, tenants seemed to want the break options, have they exercised them when the time came? In 2018, about two thirds of the time, they did not. They continued to occupy their space without interrupting their landlord’s income stream. Of all leases reaching a break date, 36% of them were exercised (figure 3). In nearly all these cases (32% of the 36%), the property was not re-let to a new tenant within six months, and ended up vacant. This picture was relatively consistent across the UK office market. Only the City of London market stands out. Here tenants were significantly less likely to break their leases; 82% of tenants stayed put.

What happened when leases ended? Although break events did not appear to be much of a worry for office landlords, lease expiration were. For those leases that reached expiry in 2018, 77% of them remained vacant for at least six months after – significantly higher than for retail or industrial properties. This high level of post-expiry vacancy was the culmination of a 20-year trend, as back in 1998 the proportion was only 50% (figure 4).

Of those that were occupied, the majority (15%) maintained occupancy of the original tenant through a renewal, with the remaining 8% occupied by new tenants. This picture was reasonably consistent across office market segments, although the City of London office market saw fewer units turning vacant after lease expiration (65%). This was mainly due to swift re-letting rather than significantly higher renewal rates (figure 5).

The fact that a relatively small proportion of tenants used their break clause might bring some comfort. As leases shortened, though, the tendency for units to remain vacant increased at the same time – a double whammy hitting the duration and security of cash flow.

While some investors might be preoccupied with the latest developments in the ‘flex-office space’, they may want to think more broadly about how flexible their more traditional office income streams may be becoming and what that means for their office investment portfolios. 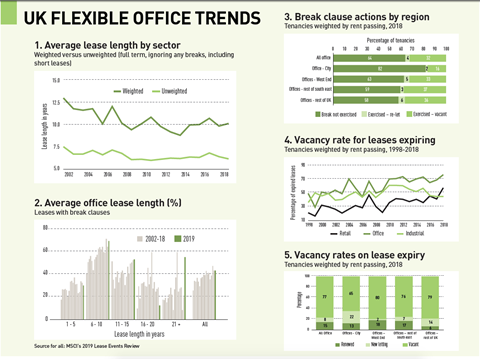