Some investors use replacement cost to help with valuations. John Lutzuis  reviews the practice and uses London as a case in point

Ideally, an investor would seek acquisitions below replacement cost early in the cycle and switch to development when it is cheaper to build versus buy on a risk-adjusted basis. The tool works best for commodity-property sectors like industrial, office and residential, but is far from perfect.

However, obtaining a high-quality estimate of replacement cost is difficult and can send a false positive in a market that never recovers. Since land values are largely a function of investment yields and market rents, the replacement cost estimate is partly a circular function. The underlying variables are, in turn, dependent on economic vigour and return requirements in the capital market.

Despite these concerns, many market practitioners employ the concept because it anchors acquisition and development market pricing in bricks and mortar and provides a sense of the current stage of the real estate cycle.

The most celebrated replacement cost-based story is the mid-1970s purchase of the Uris portfolio by Olympia & York. The deal, for one of New York’s largest office portfolios at the time, was struck at $30 (€26.7) per sqft when replacement cost was roughly $90 per sqft.

Olympia & York founder Paul Reichmann said of the deal: “I looked at every [building]. I knew we couldn’t build them for anything like the price being asked, so I bought them.” By the time the market had fully recovered a decade later, the buildings were worth about 10 times the Reichmann’s unleveraged-in price.

Steve Roth had a similar view when Vornado bought the Mendik portfolio, a mid-sized New York City office portfolio, in 1997 for a (with hindsight) incredible $160 per sqft. At the time, new office towers cost an estimated $350-400 per sqft to build. Jon Gray probably thought the same when Blackstone bought a 50% share of Broadgate in London’s City market in late 2009.

The replacement cost concept can help with market tops as well. In early 2007, Ed Linde, then CEO of Boston Properties, said: “We still believe that the replacement cost for new development, even in a higher-priced environment such as Midtown Manhattan, where land prices have certainly risen, will be less than what people are paying for acquisitions.” In other words, it was better to be a builder than a buyer.

The best deals struck at the bottom of the market in 2009-10 were priced well below a conservative estimate of replacement cost. One deal that illustrates this was the late-2009 sale of a 50% interest in Broadgate by British Land to Blackstone. By Green Street Advisors calculations, which reflect the estimated market value of the debt in place at the time, Blackstone’s cost was about £400 per sqft – well below even a cyclically low replacement cost estimate. 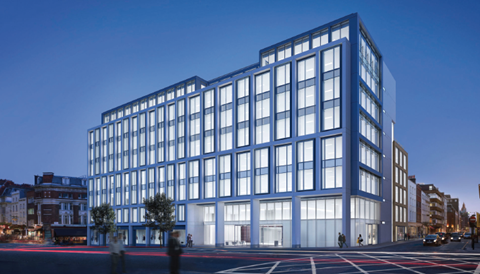 95 Wigmore Street, London, is one of the standout development deals made this year

The deal has been wildly successful for Blackstone. Hindsight can make such deals seem obvious, but many things have gone right for the London office market – for example, sharply lower yields and a surge in demand from creative tenants.

The standout deal so far this year was the sale by Great Portland Estates and Aberdeen Asset Management of 95 Wigmore Street in the West End at £2,250 (€3,064) per sqft. This reflects not only a huge premium to fully-loaded actual cost, but also pricing well above our current estimate of replacement cost. Several central London office deals by other developers have posted margins of 50% or more as the early development scheme of the current cyclical caught the market upturn just right.

Buildings trading above replacement cost are a sign of a normal, healthy market; developers are getting paid for taking risks. The London office market remains historically tight (availability of below 5%). Replacement cost is expected to continue rising as developers compete for land, construction materials, and service. We expect land values to set new records in this cycle – this has already occurred in the New York City office market. It makes sense, given current rent and investment yields, as well as increased competition from residential developers.

• The ‘known unknown’ is the date that new supply starts to overtake incremental demand. We expect central London availability to rise above 6% sometime in 2017, which may bring to an end the strong run of rental and property-value growth. Given the restricted environment for financing for speculative development, however, the risk of material overbuilding appears modest;
• The ‘unknown unknown’ is a demand shock of some kind, often associated with the end of the development bull run. We worry more about a demand shock than a supply shock in the current market. As in past cycles, the best operators will position themselves to withstand and even benefit from such a shock.

Central London replacement cost estimates now incorporate land pricing at or above a historical range, and some notable recent acquisitions have been done near or well above current replacement cost levels. At this point in the cycle, acquirers will want to pay careful attention to their all-in cost basis, as the development machine is cranking up to meet strong tenant demand.

What is replacement cost?

Green Street Advisors defines the term as the estimated all-in cost of creating a new unit of real estate, measured per sqft. It includes land at current market value, plus all other costs, including tenant incentives. There is no one number etched in stone; it is a moving target. As costs change based on market conditions, replacement cost changes as well. For example, our estimate, as of June, of the cost of building a new mid-rise office block in the City of London was about one-third higher than our estimate as of September 2011.