REITs are selling and foreign investors are buying. Why are major deals taking place when the outlook for London offices is so uncertain? Maha Khan Phillips reports

In July, British Land announced that it was returning up to £300m to shareholders via a share buy-back during the current financial year. The UK’s second-largest real estate investment trust (REIT) made its logic clear: there are fewer attractive opportunities in the office market today, and its own discounted shares offer better value than future asset acquisitions. REITs have been trading at discounts to net asset value (NAV) of around 15% to 25% since the Brexit referendum, as uncertainty grows over the future economic well-being of the UK.

British Land is not the only REIT returning money to shareholders. In February, Great Portland Estates sold Rathbone Square to German fund Deka for £435m, and announced that it would give £110m back to shareholders through a special dividend.

But while REITs are finding limited opportunities in the office space, institutional investors, particularly global investors, have made many high-profile acquisitions. The UK’s largest-ever office deal took place in July when Hong Kong’s Infinitus Property Investment bought the iconic ‘Walkie Talkie’ building at 20 Fenchurch Street for £1.28bn, from Land Securities and the Canary Wharf Group, the two companies that completed its construction in 2014. In March, another iconic building, the ‘Cheesegrater’ Leadenhall Building, was sold by British Land and Oxford Properties, the real estate arm of the Ontario Municipal Employees Retirement System (OMERS), netting British Land £575m from its 50% stake.

“The direct market is buying, and the listed market is selling, and investors are discounting net asset value, which is down somewhere between 15% and 25%,” says Anthony Duggan, partner, capital markets, at Knight Frank. “So there is some discrepancy there.”

What is causing this disconnect between sentiment in the public markets and private markets?

But the spectre of past challenges are hard to shake off.

Irfan Younus, head of research Europe for Savills Investment Management, says REITs are wary of repeating mistakes. “During the global financial crisis, a number of REITs went through a phase where they had to do deep-discount rights issues to survive,” he says. “The memory of the crisis is still there, and REITs are trying to deleverage, so that if there is an impact from Brexit on the property market, they are insulated from it.” 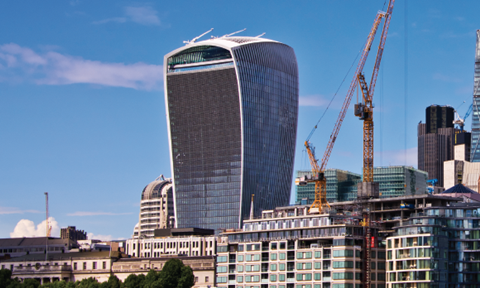 Foreign investors, meanwhile, benefit from exchange rate differences. In the first half of the year, there was investment turnover of £8bn in London, with Hong Kong and mainland Chinese buyers accounting for 42%. They have been particularly active in the City and West End, having made 10 single-asset deals in excess of £100m in the year to date, according to Ben Burston, head of UK capital markets research at JLL.

And it is not just overseas investors who are still looking for opportunities. Data from Savills shows Asian activity at the end of Q2 accounting for 50% of City turnover. European investors make up an additional 25%, while UK investors stand at 16%. The remainder comes from the US and Middle East.

“Investors need income,” says Younous. “Despite the chatter about higher interest rates, the investment market continues to be attractive for people who are in search of income.”

In general, the office sector has not fared badly. “In terms of the occupier market, things have broadly turned out to be better than many expected in the second quarter,” says Eduardo Gorab, property economist at Capital Economics. “The sentiment around the occupational market has improved.”

Capital Economics has forecast yields to remain broadly flat over the next two years, at 3.5% in the City and 3.2% in the West End. It also believes that the Bank of England will begin to tighten monetary policy by the middle of 2018, and the yields of most property assets will go up. 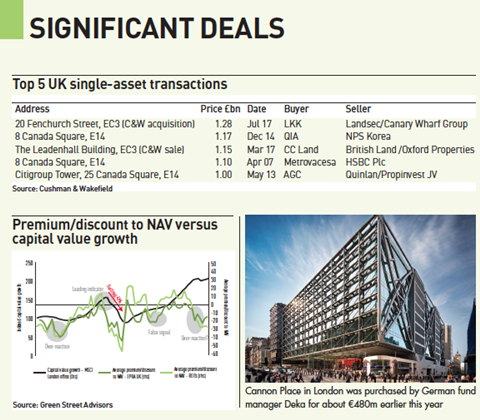 But industry participants are particularly concerned that Brexit will affect the market, and the financial sector most of all.

“One of the big concerns for the investment market is that whilst there is good demand from foreign investors – notably the Far East – that demand could go away,” says Hemant Kotak, managing director at Green Street Advisors. “Another big concern is reduced occupational demand from financial services, and what the impact would be if there was a hard Brexit and firms lost their passporting rights.”

Research from Knight Frank reveals that 80% of financial companies that had active market requirements at the beginning of the year still went on to transact in the market, although 10% of those chose to renew or renegotiate lease at their existing offices.

However, the broader trend was less optimistic. The level of take-up from financial services occupiers across central London in 2016 was 28% below the long-term average of 2.5m sqft.

Gorab believes it is important to keep things in perspective. “We are still unaware of what the Brexit deal will look like, let alone any transitional arrangements,” he says. “In principle, Brexit could prove to be detrimental to office demand. But we should bear in mind that, from 2009 until the end of 2016, the financial sector contributed less than 4% of growth in London office-based employment.

“The banks have had to deal with the aftermath of the crisis, and that would have come through on the employment side. Instead, almost 60% of the number of jobs added since the crisis came from business services and IT. That’s a fairly varied set of firms, but in terms of office leasing it’s roughly the amount of take-up that has not been taken up by financial firms over the last five years.”

The multi-media mobile application Snapchat acquired its first London office in April, for example, while tech heavyweights Google, Facebook, Apple and Amazon have all made sizeable commitments, as have Expedia, Deliveroo, WeWork, HSBC Digital, and Zoopla.

Elizabeth Troni, head of EMEA research & insight at Cushman & Wakefield, believes there are other, longer-term drivers that will structurally affect the market, which people need to be concerned about. “People are interested in the short-term impact of Brexit on employment and potential relocation but, actually, in the long term the key risk is around automation,” she says. “Automation will have a potential impact on over 100,000 jobs, according to some think tanks.”

Another concern is that there will be too much supply in the pipeline. Elaine Rossall, head of central London research at Cushman & Wakefield, says that supply is still relatively low. “Vacancy rates are going up, but we always knew that they would, because of the significant volume of new space going online at the end of 2016 and 2017,” she says. “In terms of the pipeline, if you start to look at 2018, nearly 55-60% is already pre-let. So although the total completion looks very high, a significant volume is pre-let.”

But Rossall says some completion dates are moving out. “Some of the buildings due to complete in 2017 are not completing until 2018. We are still having buildings starting, but ones where there is a bit of risk are probably being delayed slightly.”

For his part, Kotak feels that supply figures are not always accurately assessed. The firm prefers to look at figures as a percentage of total stock, rather than in absolute square footage. “One of the concerns is that there is too much supply in the office space and rents could fall materially. We’ve taken a closer look, and we feel that the way the market measures the potential supply is exaggerated. A lot of people look at broker reports, which really covers the maximum amount of supply that could come into the market.

“Also, when you look at it on a net basis, it is less concerning,” he explains, pointing out that, in a crowded London market, buildings are often torn down and replaced, rather than built on new locations.

So while the market is not faring as well as it has done in the past, it is not doing as badly as many had feared it would. Part of that, says Troni, is because institutions are trying to underwrite long-term investments. “There are long-term benefits to investing in a knowledge-based industry. Investors will be nervous because of the supply pipeline and the potential pressure on rents, but rents are likely to hold through the period. Investors are unlikely to try and time the market.”

As negotiations get under way between the UK and the European Union, the British Property Federation (BPF), the trade association for the UK real estate industry, has called on the government to undertake a series of steps to ensure business confidence remains in the sector. The UK real estate industry contributes £94bn, or 5.4% GDP, annually to the economy and employs 2.1m people, or 6.8% of the workforce. 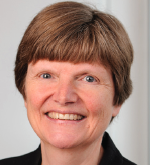 “Maintaining business confidence is essential. The government has to get the message across that Britain is a great place to do business. We attract global investment, and it is really important to us that investors see the UK as a great place for real estate,” says Melanie Leech, chief executive of the BPF.

In addition to working in partnership to maintain business confidence, the BPF wants the government to provide a stable and competitive UK tax, regulatory, and planning system. It wants infrastructure investment to be encouraged and funded, to unlock land and make productivity improvements. It wants the government to help ensure the industry has access to skills required for construction and development, and it supports an increase in housing supply.

“We want the government to focus on things that it has under its control,” Leech says. “It’s important that there are no further shocks being introduced into the system.”

Leech also emphasises the need for a transitional process to be in place during the Brexit negotiations. “For our sector, where we make 10 to 30-year decisions, a two-year negotiating period for Brexit seems like a very short period indeed. We need to make sure there is a transitional process. We would start with the point of view that we should stay in the single market and the customs union, until it is clear what the new way forward would be. You shouldn’t stop one arrangement until you are clear on what the next one will be.”