After concerns that real estate capital-raising could be slowing, all evidence points to continued appetite among institutional investors

At the beginning of the year, IPE Real Assets reported on what appeared to be a dip in real estate fundraising last year. Early indications, according to data provider Preqin, were that private property funds raised $109bn (€89.5bn), down on $126bn recorded in 2016.

The slowdown came at a time when other private-market funds – such as buyout funds, debt funds and infrastructure funds – were reporting record years.

But investors should not dismiss the findings. Most crucially, the slowdown in real estate comes at a time when other private-market funds – such as buyout funds, debt funds and infrastructure funds – have had record years.

At the time, Oliver Senchal, head of real estate products at Preqin, said: “The private real estate market is currently running in counterpoint to the wider private-capital industry. These could be signs of growing sentiment that the market is at risk of becoming overheated…. If investors are seeking to protect themselves from a turn in the market, we may see this trend continue and strengthen into 2018.”

However, Preqin also highlighted that these were preliminary numbers, and the figure of $109bn could rise by up to 10% once more information comes through.

In fact, it rose by around 14% to $124.5bn (see figure), just shy of 2016 levels. It seems that concerns about a pullback in appetite for real estate were premature.

As if to hammer the point home, Starwood Capital Group announced that it had raised $7.55bn for its latest global opportunity fund. Starwood Global Opportunity Fund XI is the largest in the company’s history.

In April, real estate associations INREV, ANREV and NCREIF published their joint global real estate capital-raising study. And rather than finding fundraising in 2017 coming close to 2016 levels, they found that it had exceeded them, at €152.3bn versus €122m.

Henri Vuong, INREV’s director of research and market information, pointed out that the sample size had grown (by 8%), but it could not alone account for the 25% increase in the headline number.

The survey showed that the number of managers raising capital in 2017 also rose 25% to 175 from the previous year. And for the next couple of years, 69.1% of managers expect capital-raising to increase, the report revealed.

“INREV said global pension funds were the highest contributors to the capital raised in 2017 as the institutions accounted for around 35.8% of the contributors. Insurance companies were next, with 13.2%”

The survey also highlights that for the third year running Europe topped the list as the investment destination of choice with 44.1%, representing around €67.2bn of the capital raised destined for this region. North America was next as it added 28.8% of the capital raised followed by Asia-Pacific with 16.4%.

INREV said global pension funds were the highest contributors to the capital raised in 2017 as the institutions accounted for around 35.8% of the contributors. Insurance companies were next, with 13.2%.

Funds led as the vehicle of choice for capital raising in 2017 as more than 55.1% of new equity raised was destined for them. The next largest proportion of capital raised was for separate accounts investing directly, accounting for 20.7%, the survey revealed.

Evidently, institutional investors are not shying away from so-called ‘late-cycle investing’. It was a topic that came up at MIPIM trade fair in Cannes in March, and was repeated at the INREV annual conference in Dublin in April. 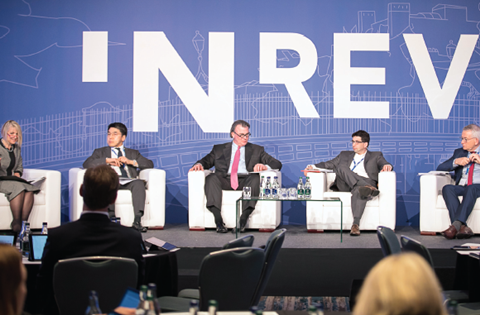 Fellow panellist Dennis Lopez, who became CEO of QuadReal Property Group last year, said the recently established subsidiary of British Columbia Investment Management Corporation had plans to grow significantly. QuadReal manages CAD24.5bn (€15.8bn) of the Canadian pension fund’s CAD133bn in total assets. “The goal is to increase the allocation to real estate to 50 billion and most of that will be international,” Lopez said.

The panel session and the findings of the INREV/ANREV/NCREIF study chime well with IPE Real Assets’ latest real estate investor survey (see page 60), which shows most investors have either upped (33%) or maintained (51%) their real estate allocations. It also suggests that investors remain below their target allocations, with the average actual allocation 11.1% coming in below the average target of 12.4%.

The survey also shows that most investors plan to invest or commit a greater amount (22%) or the same amount (59%) to real estate in the next 12 months compared with the previous 12 months.

The appeal of Europe versus the US and Asia-Pacific, which was shown by the INREV/ANREV/NCREIF study was also picked up by IPE Real Assets’ survey. Europe was the main target (89%) for new investments in the next 18 months, ahead of North America (67%), Asia-Pacific (58%) and Latin America (31%).