Guest viewpoint: What matters for property is what is driving inflation

With inflation rising in the US and Europe, there are fears that it could exceed expectations and be sustained at higher levels. If central banks are forced to increase interest rates sooner than they would like to counter the threat, then this will lead to a repricing of asset classes.

Commercial real estate is often considered to be an inflation hedge because rents can be linked to inflation. But would this be enough to counter a potential rise in the risk-free interest rate, forcing a price downgrade?

Rising inflationary concerns, particularly in the US, have raised the prospect that the US Federal Reserve Bank might need to start raising interest rates sooner than expected. This has global implications. The Fed has indicated it will tolerate a higher level of inflation, but its recent signal that rates could start to move higher in 2023 rather than 2024 suggests that it is not as convinced that inflationary pressures will be as temporary as thought.

Rising inflation expectations in the US have already pushed 10-year Treasury yields steadily higher since August last year. And, although yields have come back a bit recently, they are still around pre-pandemic levels. While interest-rate rises might not be imminent, higher bond yields look likely to endure.

Europe is also experiencing rising inflation, albeit mainly driven by temporary factors, according to analysts. Oxford Economics expects a peak of 2.5% in the euro-zone towards the end of the year, and a peak of 2.3% in the middle of 2022 in the UK. Thereafter, inflation is expected to fall back below central-bank targets. But any forecasts come with risk, and a sustained bout of inflation cannot be ruled out.

Rents can be linked to CPI inflation increases, although the extent of this differs between countries. Despite this obvious link, the relationship between changes in inflation and prime office rental growth is surprisingly weak. At a European level (ex-UK), the correlation was 0.43 over the 1995-2020 period. 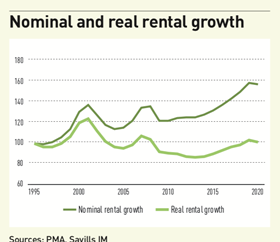 Investors hoping that rental growth will act as a buffer to protect their income against inflation need to know whether property produces ‘real’ rental growth or if inflation erodes rental income. Over the past 25 years, prime European office rents have risen by 60% in nominal terms. After inflation is factored in, prime rents in real terms were at about the same level in 2020 as they were in 1995 (see figure Nominal and real rental growth).

Since 1995, rents have grown by just enough to offset the impact of inflation, suggesting that rental growth can act as an inflation hedge for investors, protecting the real value of their income streams over time. However, while this might be true over the 1995-2020 period, data from PMA/Savills IM, May 2021 shows that securing the full benefit of this hedge depends strongly on when investors choose to enter and leave the market.

Judging this timing is inherently difficult. It is generally better to enter the market as economic growth starts to recover, though understanding the outlook is important. Picking the optimum exit point is much harder.

There is evidence to suggest that, over the past 25 years, nominal office rents in Europe have grown most strongly in years of rising inflation, averaging 4.2% annually. This compares with an average decline of 0.3% annually in years of falling inflation. This was true of the main European office markets, with Paris the only exception, although the difference was marginal.

So, does this mean that property performs well when inflation is rising? That depends on the cause of the inflation. It may be the result of temporary factors such as higher energy prices or brief supply-chain disruptions. In this case, the jump in inflation will be relatively short lived.

Short-term inflation makes little quantifiable difference, but office rents stand out as tending to do well when higher inflation is associated with robust economic activity.

Periods of rising inflation tend to coincide with strong GDP growth, as prices are pushed up by strong demand and constraints on the ability of firms to meet it. It is no surprise then that cyclical peaks in the economy coincide with periods of higher inflation.

This relationship between inflation and the wider economy is important for commercial property. The level of business activity is a key driver of occupier demand and rental growth.

There is a strong positive relationship between changes in GDP and prime office rents, with a correlation of 0.74 from 1995-2020. This suggests that it is the relative strength of the economy, rather than inflation, that has more impact on rental growth. In this respect, the economic recovery should be supportive of commercial property markets.

Where do inflationary risks for commercial real estate lie? As the US economy reopens, the excessive saving and massive fiscal stimulus could see demand outstrip supply. If this occurs, inflation could be higher, and stickier, than anticipated. 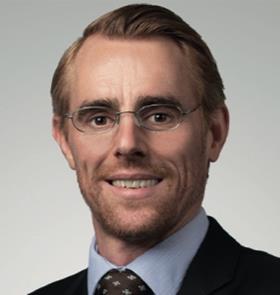 A period of higher inflation due to strong economic growth is not necessarily a bad thing for commercial property. But if the Fed must move sooner and more aggressively than anticipated, a sharp slowdown of the US economy would likely follow. This would damage global growth. Property markets would suffer as occupier demand weakened and capital flows dried up.

Even if higher inflation proves temporary, as interest rate rises draw nearer higher government bond yields will also impact commercial property. Financing costs would rise, and higher risk-free rates would mean that assets such as property would indeed need to re-price. This is a risk that needs constant monitoring.