Ahead of November’s climate summit, real estate and infrastructure investors have much to think about. Christopher Walker reports

Ahead of COP26, the 26th United Nations Climate Change conference due to be held in Glasgow in November, expectations are high. Early this year, the Intergovernmental Panel on Climate Change (IPCC) released its report setting out that nothing less than transformational change is necessary if we are to avoid recent extreme weather worsening further. 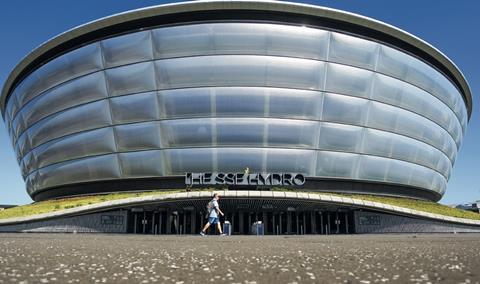 SSE Hydro at the Scottish Event Campus, which will be one of the host venues for the upcoming COP26 climate summit in Glasgow

“Everyone will be watching the NDCs [Nationally Determined Contributions],” says Rick Walters, chief of standards and innovation at real assets sustainability benchmark GRESB. The NDCs, which refer to government efforts and objectives to contribute to global emissions reductions, will become increasingly important to real assets, with building and construction thought to be responsible for 39% of all carbon emissions. This year, for the first time, there is a Built Environment Day on the formal COP agenda.

There are a number of government and industry initiatives already in motion. The EU recently unveiled its Fit-for-55 package of 13 policy proposals to achieve the European Green Deal. It includes plans to establish a new carbon market for buildings, a strengthening of the Energy Efficiency Directive (EED) and a promised revision of the Energy Performance of Buildings Directive (EPBD). The US government, meanwhile, is undertaking similar initiatives to improve the efficiency of federal, commercial and residential buildings.

But it not just being led by governments. “Associations and coordinating organisations are also coming together and putting a few stakes in the ground,” Walters says. Building To COP26 is an industry “partnership to promote radical collaboration for climate action” ahead of the summit. It calls for emissions from building projects to be halved by 2030, and to reach net zero by 2050. It encourages all countries to include full building-sector decarbonisation targets in their NDCs.

Last week the World Green Building Council updated its Net Zero Carbon Buildings Commitment to include new requirements for addressing embodied emissions. One tenth of carbon emissions comes from the materials and construction processes required to build and renovate buildings, also known as embodied carbon. It is estimated that, between 2020 and 2050, more than half of total carbon emissions from all new global construction will be due to embodied carbon.

Walters believes “The next level of detail can be teased out in that built environment day”, with policy makers saying “how the building sector will contribute to earlier targets”.

Robbie Epsom, EMEA head of ESG at CBRE Investment Management, says: “COP26 will be key for our sector, which is likely to be the second-biggest focus of the summit after the energy sector.” Epsom expects “legally binding net-zero targets” and is hoping for greater clarity “that the science-based target initiative will give us some net-zero guidance.… enabling consistency in approach”.

But he admits, “assets will need to be refurbished to remove all burning of fossil fuels on site, replacing gas and oil burn boilers with technologies such as heat pumps to take advantage of already decarbonised grids”.

Technology can play a role in all this activity. CBRE Investment Management believes it is likely there will be more and more use of industrial/logistics roofs for solar panels and, in due course, there may be opportunities within urban areas for direct carbon capture from the air. “Any major refurbishment going forward will inevitably use circular economy materials,” Epsom says.

There are good reasons to focus on embodied carbon. “Improving operational efficiency was a big deal in the past [and] we’re largely there now,” says Walters. “We know how to make buildings energy efficient.” For new buildings, “the operational design is increasingly so good that most of the carbon is actually in the materials.”

Billy Grayson, executive vice-president at the Urban Land Institute (ULI), says the same phenomenon is happening in the US. “The top 25% in terms of energy efficiency as defined by BREEAM are seeing better operating expenses, vacancy rates, and rents.” This ‘brown versus green’ dynamic is likely to accelerate. Grayson says, “the shape of that curve will be interesting. There will be significant erosion of value for buildings that can’t attract institutional capital because they’re not meeting a baseline environmental performance standard.”

Walters talks about the dangers of a tipping point in property valuations. “Technically, a building is not stranded until it doesn’t make code, but if it’s already starting to be in the minds of sellers and buyers before then, you may start to see a snowball effect. You don’t want to be the last one trying to sell in 2030.”

GRESB is planning to launch a new service for members “by the end of the year to help them to understand their transition risk in their portfolios”, Walters says.

“A brown discount will increasingly become a reality,” says Epsom. But, he adds, “in most geographies we operate in, there is already a legal framework for net zero in place. Inevitably, the market moves several paces before the law.”

In addition to circular economy principles, Walters hopes for technological breakthroughs in materials. “Real estate and infrastructure can have a big impact here because they are such big buyers.” As we see a radical transformation of materials industries, disruption may be the order of the day. “These are huge industries that are very capital-intensive – you don’t just change them out one year, and ‘there you go’,” he says.

Disruption certainly came recently when a Swedish court revoked the operating licence of Sweden’s largest cement plant, because of concerns over the plant’s environmental impact assessment. Construction industry body Byggföretagen warned that “Sweden is facing an extensive construction halt. By November, three out of four new homes will not be able to start construction.”

Electric forecourt in Braintree, Essex, England: the first to open as part of a £1bn (€1.2bn) plan to build 100 in the UK over the next five years

And further disruption for all real assets investors could come from possible agreement at COP26 on carbon border taxes. In July, the EU commission proposed a Carbon Border Adjustment Mechanism (CBAM), or CO2 tariff, on polluting goods from 2026. This will force some companies importing into the EU to pay carbon costs at the border on carbon-intensive products such as steel and aluminium. The US and UK are looking at similar policies.

Walters agrees: “This could be quite dramatic when it comes to cost of materials; [we just have to] pray for a level playing field.”

Bitter-sweet outcomes for the infra industry
It is certainly going to be a bumpy ride for infrastructure investors. On the carbon border tax issue, Andreas Köttering, head of European infrastructure at CBRE Caledon, believes the asset class “is at particular risk due to the large volumes of construction materials in new-build infrastructure”.

Lawrence Slade, CEO of the Global Infrastructure Investors Association (GIIA), agrees: “It looks like there might be some quite major disruption.” He adds: “COP26 is absolutely top of the list.… there’s a lot of questions that play into every area of infrastructure.”

This is because, as Köttering puts it, “unique challenges [are] faced by infrastructure, compared to other real assets”.

Stern says the scale of change is brought home by Anglian Water’s massive pipeline project in the UK designed to address the disruption from rainfall levels, “aiming to move water around in a way that they’ve never had to”.

Walters says a clear division is emerging between energy and non-energy related infrastructure. For the former, “the big question is whether we will see firm country commitments to phase out coal mining and coal-fired power stations altogether by specific dates”, he says.

The potential infrastructure impact is enormous. Murray Birt, senior ESG strategist at DWS, says: “Net-zero goals are likely impossible without carbon capture, use and storage technologies.” The International Energy Agency (IEA) estimates that captured CO2 needs to grow by 20 times by 2030, which entails retrofitting about 20 coal power plants and 90 cement plants every year.

There is also an upside. “For infrastructure investors, the finance agenda is as important as the built-environment agenda,” Stern says. “We are looking at what might come out to mobilise private finance for the various post-COVID build-back-better campaigns.”

Chris Dodwell, head of policy and advocacy at Impax Asset Management, a dedicated European renewable energy specialist, agrees. “Addressing the climate emergency will ultimately require a full rewiring of the global economy,” he says. “The best way for national governments to attract private investment at the scale needed for this transition is for them to underpin ambitious sectoral roadmaps with ‘investment-grade’ policies.”

COP26 might also encourage infrastructure changes in the developing world to meet its commitments. Asian emissions are now greater than those of Europe and North America combined. Tony Coveney, head of infrastructure asset management at Thomas Lloyd, says mobilising finance in developing countries “has the ability to make a major impact. A net-zero world in 2050 can only be achieved if we tackle the challenges where they are most needed”.

Real asset investors making net-zero moves is a process not an event. Walters talks of a cascading effect, “starting with some kind of commitment, then, over time, targets and, eventually, actual reductions”.

Increasingly, there are two types of investors – those who are onboard and thinking ahead, and those that are uncertain of their direction. Grayson says it is the “non-publicly-listed companies that have made less progress because they’ve been insulated from investor pressure”.

Stern says when it comes to taking action on infrastructure “the rubber has got to hit the road now”. He says: “We’ve already used up 10% of the time we have left before net-zero kicks in. It’s very clear everything is changing around us.”

For real estate investors, GRESB data for the past three years shows a consistent 75% of respondents who are setting any form of climate-related targets. And the proportion making a specific net-zero commitment is rising: 3.7% in 2019, 7.9% in 2020, and 15.1% in 2021.

Both sectors are way below targets being set in the public equities space. “Investors need to go five times as fast if they are to get anywhere close to meeting the Paris targets,” Walters says.