Asia-Pacific is home to a proliferation of new REITs. Florence Chong explores what is happening

The Asia-Pacific market for listed real estate investment trusts (REITs) is entering a new phase of growth, with China, the Philippines and other emerging markets adding to the pool of REITs in this region.

A dozen REITs, including nine Chinese REITs (C-REITs), have listed so far this year. Roughly a similar number is going through documentation rituals for initial public offerings (IPOs). The greatest number of new listings in 2021 is expected to appear on the Philippine Stock Exchange in Manila.

Industry experts say impetus in the REIT market is coming from governments, which now see REITs as a way of unlocking and recycling capital to fund post-COVID-19 projects. Global private equity and asset management groups are also poised to drive the sector further by listing assets as they wind up unlisted vehicles.

“With the ability to recycle capital, REITs are a vital tool to revive economic growth in the wake of the pandemic,” says Sigrid Zialcita, CEO of APREA Asia, the industry body for real asset owners.

As the worst impact of COVID has hopefully passed, Zialcita says Asian governments have fast-tracked plans to establish the necessary REIT frameworks. This has led to several new listings.

Jeremy Ong, head of the Hong Kong REIT practice for law firm Baker McKenzie, says that governments play an advocacy role in putting in place legislation to facilitate listings. Hong Kong is one example, he says: “Hong Kong wants to position itself as an asset management hub, and a REIT is a good way to do it.”

In her budget speech this year, Hong Kong’s CEO, Carrie Lam, announced a number of incentives, including subsidising 70% of the costs of listing a REIT, capped at HK$8m.

Baker McKenzie has been in discussions with authorities in China and the Philippines on setting up REIT legislation over the past two decades. Just weeks after getting its pilot C-REITs off the ground in June, China broadened the list of assets that could be considered for more infrastructure REITs. The country also lifted geographical limitations (see China details roadmap for the C-REIT).

Increasingly, the concept of securitisation is being accepted by developers who, in some economies, have tended to hang on to their core assets. Now, with pressure to become ‘asset light’, going down the REIT route is an appealing alternative.

Ong says developers and other asset owners now consider REITs as an avenue for raising capital while still having control over the assets. This is certainly the case in China and the Philippines.

Ong says SF Holdings might use these proceeds to develop its national logistics network or for opportunistic M&A, while maintaining stable operations by leasing back the logistics centres from SF REIT.

He expects other companies to adopt this approach, both to free up capital and to grow their businesses as they become more familiar with this type of asset management technique.

“Another potential source of REIT demand comes from private equity exiting from portfolios they have amassed since establishing their development or income funds several years ago,” says Ong. “These funds may hold attractive assets in more varied asset classes, often aligned with the new economy, that would greatly diversify the Hong Kong REIT sector – which is presently concentrated in commercial and hospitality assets.”

Blackstone listed Embassy Office REIT on the Bombay Stock Exchange in 2019, and Brookfield REIT began trading on the Indian Stock Exchange in February 2021. Both rolled over their privately held assets into these public REITs.

Expansion in the APAC REIT market is a given because the region is the fastest-growing real estate market in the world, he says. Leung, who began investing in Asian property securities 20 years ago, reflects on a doubling of the capitalisation of the Asian REIT market in that time.

“From the perspective of an investor, this is good,” he says. “It makes the market less cyclical because the new sectors are driven by secular trends, e-commence and demographics. They improve the quality of earnings and will be more stable because their revenues come from rental incomes.”

Compared to the US, where alternative asset classes now account for more than half of all US REITs, Asia-Pacific has a long way to go to catch up. But, in time, says Leung, these newer asset classes will eclipse the pre-eminence of developers, which have dominated the Asia-Pacific listed property market.

“The region is seeing more REITs owning digital infrastructure and other alternative asset classes like cell towers, data centres and healthcare,” he adds.

A successful IPO needs to be a persuasive narrative, says Ong. Hot asset classes tied to the new economy or e-commerce, such as data centres, modern logistics and cold-chain logistics, may presently elicit a stronger response from the market, especially if they have a well-regarded sponsor.

“Hong Kong authorities are very keen to attract these premier assets and sponsors to list in Hong Kong, which is one of the key reasons they substantially revised their REIT code last year,” Ong says.

Sydney-based Home Consortium is on track to list its A$1bn (€610m) HealthCo on the Australian Securities Exchange later this year. Singapore’s Mapletree has plans to launch a US$1bn-plus student-housing REIT this year or in 2022.

Once a listed company, the now privately-owned logistics giant GLP is moving back into the public space to list its assets. It is expected to list a logistics REIT in Hong Kong in coming months. Logistics and data centres are both keenly sought after in Asia.

Alain Charles Veloso, a partner in the corporate and commercial practice group and head of the capital markets practice of Quisumbing Torres, a member firm of Baker McKenzie in the Philippines, says Jollibee, one of the country’s largest food groups, is looking at listing the Philippines’s first and biggest industrial REIT, to be managed by DoubleDragon. 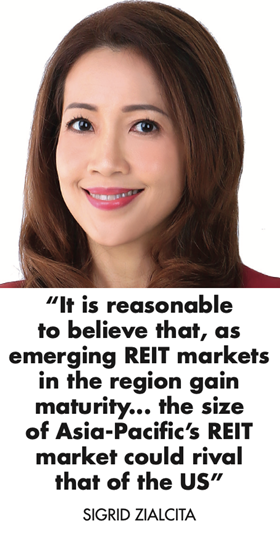 The DoubleDragon-Jollibee REIT will be seeded with industrial properties for making supplies for Jollibee’s food business. DoubleDragon listed its own REIT, a portfolio of six office towers with retail components, in March.

Filinvest REIT came to market in August, raising 14.9bn pesos (€251m). About 88% of tenants in its listed portfolio of 17 buildings are multinational business-process outsourcing (BPO) firms. For Manila, these three listed REITs have become a silver lining in an otherwise soft capital market.

“They are among the best-performing stocks in the market,” Veloso says. “The success of Philippine REITs can be attributed to the income generated from leasing space to BPO operators, whose businesses have been resilient during the pandemic. More businesses are shifting to e-commerce and doing business online, and digital transformation needs call centres and IT support.”

The collective market capitalisation of these first three REITs is about US$1bn. “We are looking at new market capital of US$2bn in the next year or so,” Veloso says. He points out that pending IPOs are aiming to raise double the amount raised by the first three trusts. 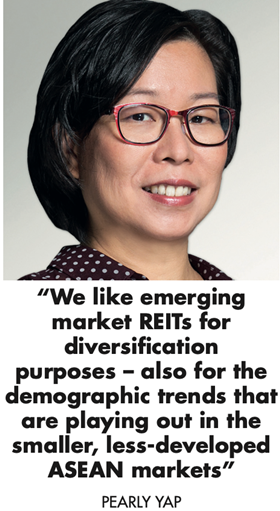 The Philippines Securities and Exchange Commission has cleared the way for IPOs of vehicles proposed by Megaworld (MREIT) and Robinson Land (RL Commercial REIT). These are seeking to raise up to 27.3bn pesos and 26.7bn pesos respectively.

Yap says: “Scarcity value and premiums to 10-year government bond yields have led to an attractive take-up on these IPOs.”

Another analyst says that investors are “pricing a lot of growth” into Philippine REITs. He says the gap between government bonds and REIT yields is just 1% compared with 3-4% in developed markets like Singapore or Australia.

India is a country worth watching for its potential. “India’s REIT market is nascent, but India’s assets are professionally managed, with a strong private-equity culture for funding, in addition to funding from bonds and banks,” Yap says.

“The availability of skilled, English-speaking talent – especially in the technology sector – implies growth in space demand for Indian offices and business parks, and work-from-home poses less of a threat. REIT regulations in India are already on par with other markets. This could help increase the number of REIT listings in the next few years.”

Zialcita says that, with India’s economy expected to be valued at US$5trn by the middle of the decade, its REIT sector can conservatively be expected to grow in tandem to close to US$200bn. “The sector remains primed for an extended growth cycle, with ample room for exponential growth,” she says.

“We like emerging market REITs for diversification purposes – also for the demographic trends that are playing out in the smaller, less-developed ASEAN markets. We are looking out for key steps, such as better tax reforms, improved corporate governance, and supportive valuations as evidence. The challenge with the new listings is simply that the track record may not be long enough to convince investors to allocate meaningful capital at an early stage.” 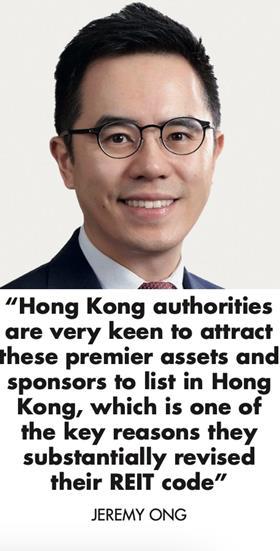 And there are cautious tales of hubris overtaking realities. “Thailand started off as the strongest REIT market in the region, but of late has seen meaningful corrections as valuations were at multiples of book value,” says Yap.

Asia-Pacific’s REIT free-float market capitalisation at the middle of 2021 was more than US$340bn.

Zialcita says: “It is reasonable to believe that, as emerging REIT markets in the region gain maturity, and conventional REITs get the green light in China, the size of Asia-Pacific’s REIT market could rival that of the US – currently the world’s largest at over US$1.3trn – by the end of the decade.”