Projections of a huge increase in air travel over the next 20 years is generating a growing appetite for aviation finance. Jochen Hörger

The agreement reached in March for China to purchase 300 aircraft from Airbus was a stark example of just how the demand for passenger planes will grow during the next two decades.

Research from Boeing predicts an increase in the volume of airline passengers of 4.7% per annum over the next 20 years1, in a sector that has proved largely immune to challenging economic conditions and crises. This follows a doubling of passenger travel every 15 years since the early 1970s as a result of airline travel becoming more accessible to a larger proportion of the world’s population.

In terms of demand hotspots, while current focus is inevitably on Asia – as shown by China’s Airbus order – all evidence points to strong continued growth in the aviation market across the world. Indeed, while further increases in developed markets (Europe and North America) are expected, emerging markets in Latin America, the Middle East and Africa, as well Asia Pacific are expected to see the highest rates of growth3.

The structure of China’s Airbus deal tells us much about where this sector is heading. Of the 300 aircraft that China has bought, 290 are A320 narrow-bodied models, reflecting growing demand from consumers and the increasing trend of more frequent travel over shorter distances. Research by Boeing would support this idea, with 74% of the worldwide aircraft fleet expected to be narrow-bodied ‘workhorse’ models by 2037.

The growth potential in aviation will be seen as an opportunity for investors to gain exposure to leading aircraft manufacturers and airlines via the equity market. There is an argument, however, that with this approach the risks outweigh the rewards. As recent events have shown, the potential for corporate difficulties, the volatility of stocks markets coming to the end of a historic bull run, and the potential for returns to be affected by movements in other markets – most crude oil prices – mean investors run the risk of underwhelming or even disappointing returns in the long term. 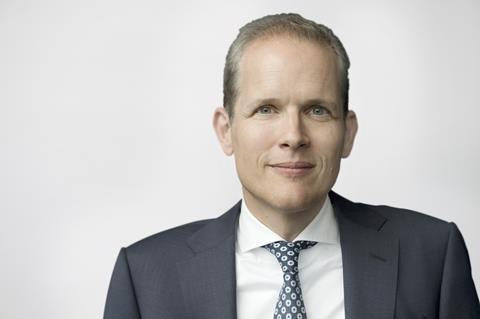 How, then, should investors gain exposure to such an attractive market segment?

One route is direct exposure to the physical assets via an aviation-leasing investment strategy. A growing area of the investment market, aviation-leasing investments have become more popular with institutional investors in recent times. This is in no small part owing to the attractive characteristics they can offer in an environment where pension schemes have to be aware of long-term cash flow and insurers cognisant of solvency requirements. 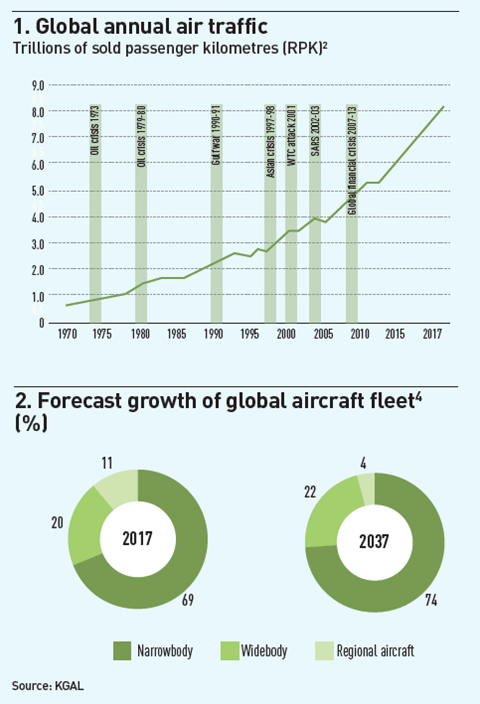 Aviation finance has similar leasing characteristics to real estate, which delivers long-dated income; an almost exponential passenger volume growth curve; and benefits from the sustained leasing demand for planes at all stages of their life cycle. Not surprisingly, this investment type – ‘bonds with wings’ as some observers call the sector – is increasingly appealing.

Importantly, such strategies can have little impact on institutional risk budgets as the risk lies with the lessee rather than the investment vehicle itself. The operating leasing contracts on which such investments are based oblige airlines to take over all operational risks – including flight operation, maintenance and insurance – ensuring investors have access to a sustainable revenue stream with limited downside exposure.

There are, of course, practical factors that investors need to take into account, not least as investments via leasing vehicles can be made across the whole lifespan of an aircraft – up to 25 years. Specific considerations are required during the various stages of an aircraft’s life. Newer aircraft have a completely different set of requirements to older ones, which require more maintenance to keep them profitable.

Inevitably, different periods of an aircraft’s life will present different appeals and risks. To date, most investment strategies have focused on the core section of the aviation market, where a combination of new planes, long leases, credit-worthy leases and reasonable leverage offer a secure income stream. More recently, however, investors have had the opportunity to invest in the later stages of aircraft lifecycles, allowing for higher risk-adjusted returns.

Investors will have their own opinions based on their requirements. Ultimately, though, the different options provided by aviation finance investment can only be a positive for institutions at a time when stable sources of income and downside protection are increasingly difficult to come by.

Jochen Hörger is managing director of aviation at KGAL