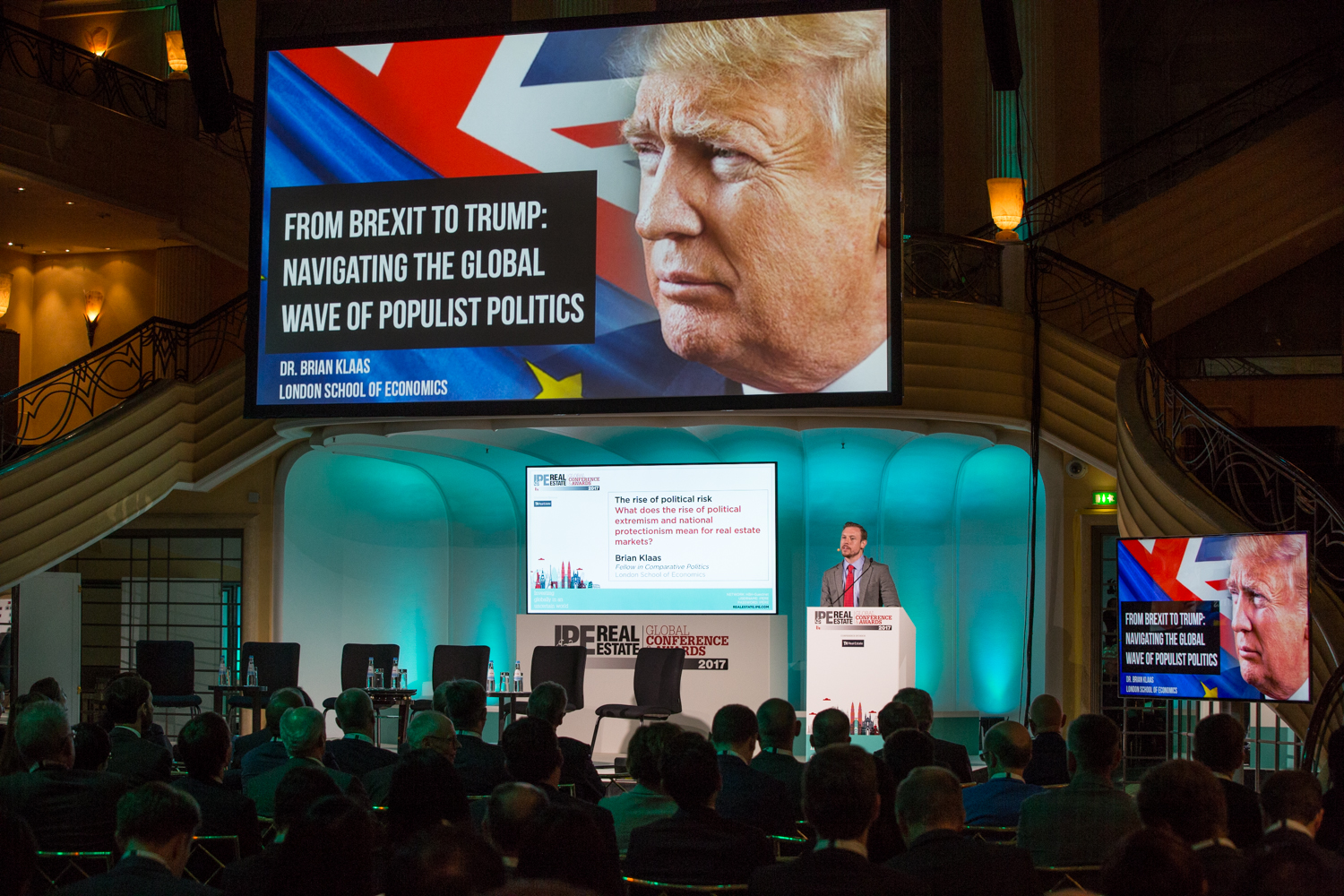 Brian Klaas, fellow in comparative politics at the London School of Economics, pointed to the UK’s vote to leave the European Union and the election of Donald Trump, adding that “populism is here to stay”.

“As investors, you should consider a wider range of possible outcomes and risks,” Klaas warned in a keynote presentation.

“If you win, can you transform your rhetoric into policy? That’s the big question right now in the US.”

Eugene Philips, senior investment manager at PGGM, said the inability to predict political events and more long-term trends makes it “so difficult to make decisions and know the outcome for five or 10 years from now”.

Speaking on a panel chaired by Barbara Knoflach, deputy chief executive and global head of investment management at BNP Paribas Real Estate, Philips said PGGM is keen to keep control of its investments in uncertain times.

“Being more and more in control of our investments will mean we can take action tomorrow,” he said. “We try to cope with all sorts of events and we want to be in control.

“We had lessons from global financial crisis – too high leverage can kill you. You should not end up in a vehicle with many other investors and no decision being made for exit.”

“Our investment committee did not see any problem before or after US and Canadian election, but amazingly we got a ‘stop’ order from Canada for Brexit,” he said. “That stop was lifted about one and half months after the Brexit vote, although nobody knows the outcome yet.

“A stop on investing in France was maintained, but only lifted two weeks ago.”

Europe, he said, still has “major problems, it hasn’t been solved”.

Marcus Cieleback, group head of research at Patrizia Immobilien, said that uncertainty around the future relationship between the UK and the European Union is “holding investors back”.

“No one knows what the future relationship between UK and EU will be,” he said. “It’s holding back investors who have a 10 to 12 year view.

“As a continental European player, we don’t want to get stuck in something that people then say ’you should have seen this coming’.

Melanie Leech, chief executive of the British Property Federation, said the fundamentals for UK real assets will remain strong “wherever we end up”.

“The consensus is that the next period will be really choppy and that uncertainty will continue for some time to come.”

The UK’s residential sector, however, is “less correlated to the Brexit aftershock than office”, he said.

“We did sell quite a lot, because we had good offers,” he said.

Wenzel Hoberg, chief executive of Triuva, said that in the long term, the UK and EU will “continue to trade”.

“Some jobs will move to Europe, but London will benefit too,” he said. “It’s a win-win for both markets.”

Hoberg, who pointed out that “major markets are becoming expensive”, said investors have retrenched to their domestic markets as a result of uncertainty.

“German investors like to invest nationally again and people are looking back to their home markets,” he said. “In France, this is also happening.

“It’s a reversal of the past 20 years – we see other markets going the same way.”

Cieleback said it is difficult to ascertain how new regulations will “interlink with each other” and what level of protection investors will gain.

“Will these regulations really shield us? Will they alter our behaviour?”

For PGGM, regulation was a reason to be cautious about investing in residential, Philips said.

Regulation has, said Hoberg, meant investors are moving over to invest in bonds and away from real estate and from leveraged real estate.

The UK’s absence from the EU could alter the way Europe regulates itself, he added.

“Germans love regulation and the French love bureaucracy, so the running of Europe is a bit concerning for investment,” Hoberg said.

Leech pointed out that in the UK, the purpose of regulation is moving away from being aimed at making sure that “working properly to working fairly”.

“That has potential to drive entrepreneurial behaviour out of the market,” she warned.

Cieleback said investors in real estate will need to be “more flexible and more creative” about how uncertainty can affect markets.

“We should look at fundamentals, but also prepare for something from the political realm and develop something that is robust against these political challenges,” he said.

In a straw poll of delegates, 60% voted for economic growth prospects as being the preferred indicator of health in a real estate market.

The most desirable feature of European real estate was, with 44%, risk-adjusted returns – ahead of income, diversification and transparency.