3
Switzerland: Beyond the cantons
Investors

Switzerland: Beyond the cantons

The share of foreign real estate in Swiss Pensionskassen’s investment portfolios has increased so significantly that Credit Suisse has started to separate the data in its long-running index.

On the surface a 1% exposure to foreign real estate might not seem much. But, as the Swiss banking group pointed out in its Q1 Pensionskassen index, “the investments in foreign real estate, both direct and indirect, have doubled over the last two years”.

He says this applies to the group’s own Anlagestiftung, or investment foundation, a collective vehicle that Pensionskassen can use to gain exposure to direct European real estate investments.

The Zurich Investment Foundation is seeking direct investment in Europe’s core markets for about CHF100m (€91.4m) to CHF200m collected from Swiss institutions, with Schroders as the fund manager. “It’s today easier to attract pension funds’ capital than to source good quality assets on the market,” says Widmer.

The situation is similar at the AFIAA, the Swiss Foundation for International Real Estate Investments, set up exclusively for Swiss pension funds. Since 2004, it has collected CHF1.4bn in assets from 43 investors, and three new investors have joined this year, confirms Stephan Kloess, head of AFIAA.

After a management restructuring following differences of opinion on the strategic positioning of the fund, Kloess was called on as interim CEO and Andreas Vögeli, partner at the law firm Niederer, Kraft & Frey, was assigned as president of the trustee board in March.

A new management will be named as soon as possible and Kloess, who has been advising companies in the real estate sector for over 20 years, is convinced this will happen “in the second half of the year”.

However, interest among pension funds in joining the AFIAA is even greater now than two years ago, according to Kloess. “We are getting requests from pension funds and insurers (running pension funds) but also from investment advisers – both those that already have exposure to foreign real estate and those that do not.”

But just like other investors, the AFIAA has difficulties finding the right investments. Before the summer, the new management was considering a “more focused strategy to account for the raised price level in the markets”, said Kloess.

He added “in future it will become more important that a location can keep its attractiveness over the course of a cycle” and therefore finding excellent locations both on a macro as well as the micro level was key. 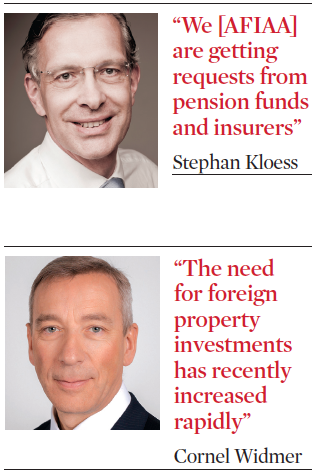 The Zurich Investment Foundation is looking at “the traditional sectors [of] office, retail and logistics in gateway cities and agglomerations”, based on a core strategy, Widmer notes. In order to better diversify returns new segments like senior housing might be added.

“What the Swiss Pensionskassen are investing in at home they are also searching for in foreign real estate,” he says.

But, he stresses, while there are “more opportunities for investments in other European markets than the narrowing Swiss market, there are no longer any low-hanging fruits” in any country.

Zurich is applying “the same core criteria as eight years ago, such as long-term cash-flow targets,” explains Widmer. What has changed are the return expectations. “The risk profile remains the same but you have to be prepared to accept lower returns,” he says.

In December last year the AFIAA had announced its intention to slightly lower its return expectations and add properties to the portfolio that “need a bit of work”.

But Kloess stresses “this strategy was only applied to very good locations in order to compensate the additional risk by an increase in quality”.

One challenge Kloess sees in the current institutional property market is that “almost no one dares to give a target return, something which had been customary 10 years ago. Instead, investors are making return assumptions based on single investments. In my personal view, properties should not be valued by one single number but rather via a bandwidth throughout a cycle.”

The consultant is also convinced any target return calculations should take into account the fact that properties do not only have to be bought but also managed.

The Credit Suisse data shows that 94.4% of the real estate investments by Swiss institutions are still domestic. Widmer says it is normal for investors to have a home bias, but in Switzerland there is “currently not much liquidity, and good quality is expensive” – and therefore “the strong home bias is slowly breaking open”.

However, regulation limits investors like the Swiss insurers of the Zurich group to the home market. “We are not allowed to invest directly into foreign real estate – we could only do so via funds but given the size of our group we like to be in as much control of the property investment as possible,” says Widmer.

So while the group is investing around CHF12bn globally in real estate, the Swiss unit of the insurer has to keep about 50% of its property portfolio domestic.

“Redevelopment has been a central pillar of our strategies for years now and we are investing around CHF150m into our own properties each year,” says Widmer.

Meanwhile, Zurich is increasing the allocation to global real estate through the capacity of other large balance sheets of the group in, for example, Germany or the US.

Kloess says Germany is a market that “remains attractive for Swiss investors because of its economic strength”. Furthermore it is “more easily accessible on a cultural level”. However, he says investors should be aware of the underlying factors of the economic growth and stability as “the current economic upwards trend will not continue forever”.

Similarly, many of the new Anlagestiftungen in Switzerland being set up to help Swiss investors to invest in properties abroad are facing one common strategic problem, Kloess says. “All these new players are buying into markets in which returns continue to shrink. That means that the portfolio is not diversified over its implementation or investment period. And it is important to have a portfolio that is stable over a cycle.”