Institutions remain below their target allocations but investor sentiment is moderating. Doug Weill and Michael Lisa report on the latest Allocations Monitor figures

The weight of this capital is having a significant impact on transaction volumes, fundraising, lending and valuations. The continued supply of capital might sustain current valuation and financing metrics (including capitalisation rates and the cost of debt capital). However, the concerns for the potential rise in interest rates, slower economic growth, new supply and valuations outpacing fundamentals have contributed to moderating investor conviction regarding the investment opportunity in real estate.

The real estate asset class continues to experience an acceleration of institutional capital allocations. The average target allocation to real estate stands at 9.38%, up 49bps from 2013 (figure 1). This is a substantial year-on-year increase and indicates the potential for greater capital flows to the asset class and continued liquidity in the marketplace. The increase in the average target allocation in 2014 is consistent with investors’ stated intentions in 2013. In terms of year-on-year changes in target allocations, institutions in EMEA had the largest increase at 89bps, while the Americas and Asia-Pacific increased 46bps and 35bps, respectively.

Institutions have indicated an intention to increase target allocations by an average of 24bps from 9.38% in 2014 to 9.62% in 2015 (figure 2). There is anecdotal evidence to support that between now and the end of the year, institutions may face further pressure to increase their real estate allocation as fixed income returns remain low, and public equity market performance remains strong.

Despite increased investment activity, institutions remain significantly underinvested. Between 2013 and 2014, the portion of institutional portfolios invested in real estate increased by approximately 50bps from an average of 8% to 8.49%. Institutions in EMEA had the greatest increase in portfolio concentration, rising 128bps. It is important to note that while institutions indicated an accelerated pace of investment activity over the past 12 months, changes in investment percentages can be meaningfully affected by a number of factors, including investment performance of existing real estate holdings and realisations (the numerator effect), in addition to overall portfolio performance (the denominator effect). 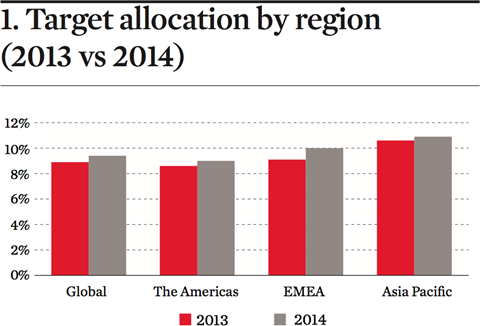 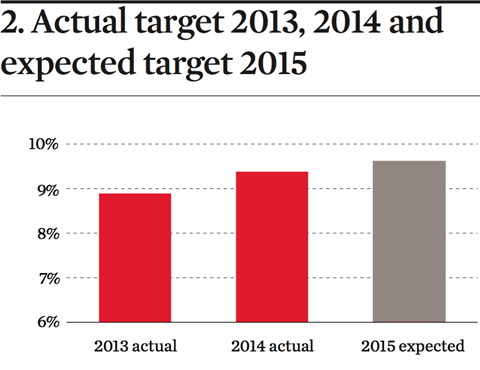 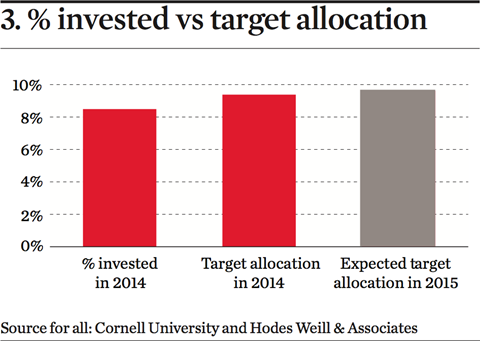 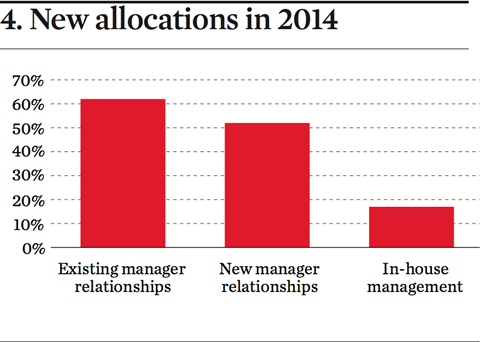 Investor conviction regarding the investment opportunity in real estate is moderating after several years of positive sentiment. This year we included survey questions regarding investor sentiment. Specifically, we asked participants to rate, on a scale of one to 10, their view of the investment opportunity in real estate from a risk-return perspective (one being the lowest, 10 being highest). Institutions indicated a decline in conviction due to the potential for rising interest rates, slow economic growth, new supply and too much capital pushing valuations ahead of fundamentals. Institutions in EMEA remain the most optimistic towards the asset class, while institutions in Asia Pacific, as well as larger institutions, exhibited the greatest decline in conviction.

Despite declining conviction, the majority of institutions are actively pursuing investments in 2014, albeit at a slower pace. The percentage of institutions actively investing in real estate declined from 81% in 2013 to 73% in 2014, after increasing for several years following the global financial crisis. Approximately 26% of institutions expect to invest more capital in 2014 than in 2013, down from 39% in 2013.

Cross-border investment activity continues to increase, as investors allocate additional capital to non-domestic strategies. While institutions remain most interested in making investments in their home markets, appetite for international investments is on the rise.

Interest in the emerging markets remains modest in 2014 with only 22% of institutions pursuing investments in 2014. Institutions in EMEA are most focused on Latin America and China, followed by southeast Asia and India.

As liquidity has returned to the markets, the data suggest a shift back towards the long-term trend of outsourcing. In fact, institutions allocating capital to new investments in 2014 are three times more likely to allocate capital to third-party managers than in house (figure 4).

In conclusion, allocations to real estate continue to grow and evolve. Institutional portfolios remain significantly underinvested relative to their target allocations. This is driving new investment activity across all regions and strategies.